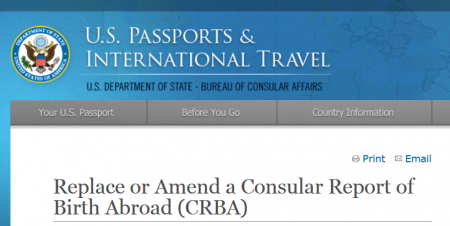 (Dec. 7, 2014) — On October 21, The Post & Email reported having sent a FOIA request to the U.S. State Department for a certified copy of a Consular Report of Birth Abroad (CRBA) for Sen. Ted Cruz (R-TX), if it exists, which would prove that he was registered by his parents as a U.S. citizen upon his birth in Calgary, Alberta, Canada on December 22, 1970.

It is unknown if in 1970 a CRBA was required to ensure that the child born in a foreign country received U.S. citizenship.

Cruz has been widely touted as a 2016 presidential candidate. Born to a Cuban-citizen father and U.S.-citizen mother, there are doubts as to whether or not Cruz is eligible for the presidency under Article II, Section 1, clause 5 of the U.S. Constitution, which requires that the president and commander-in-chief be a “natural born Citizen.”

Many in the mainstream media and the public conflate the terms “U.S. citizen” and “natural born Citizen,” making no distinction between the two.  Originally, the Framers of the Constitution had insisted that the president be simply “a Citizen,” but a letter from John Jay to George Washington written on July 25, 1787 convinced Washington and the others to define the presidency requirements as:

There is ample evidence that historically, the citizenship of the parents was considered when determining a child’s status. Four Supreme Court cases dealing with citizenship issues over the years appear to show that the term “natural born Citizen” referred to a different standard than simply “a citizen.”

After passage of the 14th Amendment, the U.S. Supreme Court ruled in one of the four cases that Wong Kim Ark, a man whose parents were Chinese citizens who had temporarily worked in the U.S., was a “native-born citizen” by virtue of his birth in the United States.

Going forward, an exception to “birthright citizenship” was the children of foreign ambassadors born on U.S. soil, who are considered citizens of their parents’ home country.  The 14th Amendment’s clause “subject to the jurisdiction thereof” is now ignored in regard to a person born in the U.S. with foreign-citizen parents.

In August 2010, The Center for Immigration Studies wrote:

Every year, 300,000 to 400,000 children are born to illegal immigrants in the United States. Despite the foreign citizenship and illegal status of the parent, the executive branch of the U.S. government automatically recognizes these children as U.S. citizens upon birth. The same is true of children born to tourists and other aliens who are present in the United States in a legal but temporary status. Since large-scale tourism and mass illegal immigration are relatively recent phenomena, it is unclear for how long the U.S. government has followed this practice of automatic “birthright citizenship” without regard to the duration or legality of the mother’s presence.

Eminent legal scholars and jurists, including Professor Peter Schuck of Yale Law School and U.S. Court of Appeals Judge Richard Posner, have questioned whether the 14th Amendment should be read to mandate such a permissive citizenship policy. Nevertheless, the practice has become the de facto law of the land without any input from Congress or the American public.

Advocates of maintaining this citizenship policy argue that the plain language of the Citizenship Clause of the 14th Amendment protects automatic birthright citizenship for all children born to illegal and temporary aliens. However, several legal scholars and political scientists who have delved into the history of the 14th Amendment have concluded that “subject to the jurisdiction thereof” has no plain meaning and that the executive branch’s current, broad application of the Citizenship Clause may not be warranted.

In August of last year, The Dallas Morning News reported that Cruz was born with dual Canadian and U.S. citizenship.  “Born in Canada to an American mother, Ted Cruz became an instant U.S. citizen. But under Canadian law, he also became a citizen of that country the moment he was born,” the newspaper reported.

The Morning News showed no proof that Cruz possesses U.S. citizenship, although it displayed what it said was Cruz’s Canadian birth certificate obtained directly from Cruz.  At the time, Cruz appeared unaware that he had always possessed Canadian citizenship.  In defense of his purported U.S. citizenship, his spokeswoman said that “he never had to go through a naturalization process after birth to become a U.S. citizen.”

One of the constitutional requirements for a U.S. senator is that the individual seeking the office be “a Citizen” of the United States for at least nine years.  Cruz’s media representative has not responded to queries from The Post & Email as to whether or not Cruz possesses proof that he is a U.S. citizen.

If a child is born outside of the United States to one or more U.S. citizen parents, that child may be a U.S. citizen at birth.  The rules depend on the following:

Citing the law in effect in 1970, Peng & Weber state that in the case of a child born abroad to one U.S.-citizen parent, “the U.S. citizen parent must have resided in the U.S. for 10 years, at least 5 of which were after age 16.”

Cruz has not made his mother’s background available to this writer’s knowledge.

On June 11, after Cruz formally divested himself of his Canadian citizenship, CNN reported that Cruz’s presidential eligibility “was never in jeopardy,” citing unnamed “legal experts.”  CNN quoted Cruz as having expressed the belief that he had always possessed U.S. citizenship.

On December 28, 2013, The Dallas Morning News stated that “the strong legal consensus is that with even one American parent — a circumstance shared by Obama and Cruz — a child born anywhere qualifies as a ‘natural born American,’ entitled to citizenship at birth and therefore eligible to serve as president.”

While The Dallas Morning News reported last year that Cruz’s Canadian citizenship “may pose a problem” for Cruz’s presidential aspirations, it did not note that Barack Hussein Obama reported on his now-defunct “Fight the Smears” 2008 campaign website that he possessed dual citizenship with the U.S. and Kenya because of his alleged father’s Kenyan citizenship.

According to his life story, Obama was born in Honolulu, HI in 1961, but evidence gathered by a three-year criminal investigation shows that his long-form birth certificate allegedly attesting to his birth in Hawaii and posted on the White House website is a “computer-generated forgery.”  Likewise, the Maricopa County, AZ Cold Case Posse found that Obama’s Selective Service registration form is fraudulent.  Congress has failed to investigate, instead choosing to fight Obama on policy issues, including his recent declaration that many illegal aliens presently in the country will be allowed to remain for the next three years without fear of deportation proceedings which would normally take place in due course based on existing federal law.

Obama has also been said by both the media and a Kenyan ambassador to the U.S. to have been born in Kenya.  MSNBC commentator Chris Matthews stated in 2007 that Obama was “born in Indonesia.”

In January 2011, an elections supervisor working in Hawaii in 2008 signed a sworn affidavit stating that he had been advised by his supervisors that it was “common knowledge” that no official birth certificate existed at the Hawaii Department of Health for Barack Hussein Obama.

According to the U.S. State Department’s website, individuals whose child or children are born outside of the United States need to file a Consular Report of Birth Abroad (CRBA) to ensure that their children are recognized as U.S. citizens in addition to any other citizenship they might be awarded by their birth in the foreign country.

Under the Texas Public Information Act, The Post & Email requested copies of the application forms Cruz completed to be considered for the position of Solicitor General in which he served from 2003 to 2008 under Attorney General Greg Abbott, now Texas Governor-Elect.  Upon receiving the documents, The Post & Email noted that the question as to whether or not the applicant possessed U.S. citizenship was not asked.

Having received no response to our October FOIA request to the State Department, The Post & Email sent a follow-up email and was then provided a telephone number to call to obtain its status.  On Friday, The Post & Email called the State Department, explaining again that it was seeking to obtain a copy of a Consular Report of Birth Abroad, if it existed, for a public figure.  The first person to whom we spoke was not sure if the document could be provided to FOIA requesters and transferred our call to a second employee.

The second person to whom we spoke advised us that a CRBA is not releasable under FOIA and is made available only to the subject individual, blood relatives or individuals with a legal relationship to the subject.  When we asked if we could publish what he said, the employee, preferring not to be quoted by name, referred us to the State Department website’s page on CRBAs, stating that the information there is “public record.”

Nearly one year ago, Cruz received a letter from the North American Law Center which reads, in part:

Senator Cruz, you have been placed in the position to end the greatest fraud ever perpetrated on the United States of America, and to stop the systematic destruction of our Country. The action required is simple – but not easy, for it requires a selfless act of love and concern for others, and calls upon you to do the right thing. Yes, some will call it a true act of heroism.

Senator Ted Cruz, as a true Christian, you must say to the nation and the world…

“It has been the delight and honor of my life that so many Americans have found me worthy of their respect and admiration, and have wanted me to run for president or vice president. But the truth is, I am not eligible for either office according to the United States Constitution Article II, Section I, Clause V wherein only a Natural Born Citizen of the United States, born of an American Citizen Father, can seek or hold these offices. I know that the Founders, in their brilliance, set this standard based on the Biblical principles of Natural Law, wherein the name, citizenship and birthright of a child was always passed by the blood of the father. Knowing this beyond question, a proud son of my Cuban father, I am not now, nor can I ever be, a Natural Born Citizen of the United States. Therefore, based upon unquestionable and prima facie evidence, I state for the record that Barack Hussein Obama, the son of a Kenyan Citizen father, is not now, nor has he ever been, nor will he ever be a Natural Born Citizen of the United States. I call for the immediate resignation of Barack Hussein Obama and the legitimate investigation into all who are involved in the greatest fraud ever perpetrated on the United States and the world, as well as all who have engaged in the greatest political cover-up in the history of politics.”

Cruz did not provide a response to the letter.

State Department Will Not Release Proof of Ted Cruz’s U.S. Citizenship, If It Exists added on Sunday, December 7, 2014

5 Responses to "State Department Will Not Release Proof of Ted Cruz’s U.S. Citizenship, If It Exists"