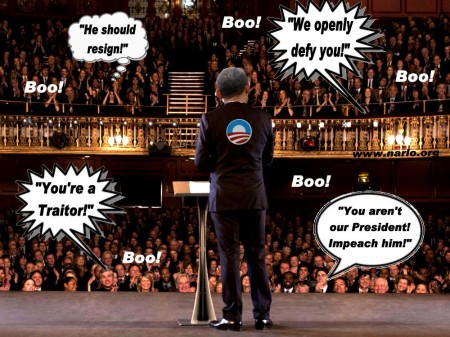 (Nov. 23, 2014) — “Remember, democracy never lasts long. It soon wastes, exhausts, and murders itself. There has never been a democracy that did not commit suicide.” John Adams, 2nd President of the United States

“Dominance.  Control.  These things the unjust seek most of all.  And so it is the duty of the just to DEFY dominance and to challenge control.” Robert Fanney, contemporary author

For six long, torturous years, Obama, the Democrats and the environmentalists have declared open warfare on the American people and on the U.S. Constitution.  From the lies and the deceit behind the passage of ObamaCare to the unconstitutional, unilateral actions by Obama on immigration and his failure to comply with immigration law and close the borders; to his severe climate change restrictions that will devastate our economy when there is no climate crisis; to the EPA’s and the BLM’s attempts to take over every mud puddle and lock up every acre in America; to the inaction by Obama when his red lines are crossed and to his open defiance of the two other branches of government and the American people; Obama, the Democrats and the environmentalists are ripping the guts out of America!

When a government grows more powerful, as the American government has, its power feeds upon itself and it becomes arrogant and secretive. The more secretive it becomes the more it will silence those who want to expose the secrecy.  It becomes a power unto itself and it recognizes no restraints or limits.  We are dangerously close to this condition, if in fact we aren’t there already, no matter which party is in power.  The final condition is absolute power.   Sadly, dealing with the government (at any level) is not unlike changing a baby’s dirty diaper.  It is distasteful, frustrating, disgusting and it smells.

This “power” over the people of America is being controlled by one president, 435 Representatives in the House, 100 Senators in the Senate, 9 justices on the U. S. Supreme Court and half a hundred federal bureaucracies that answer only to the President. This doesn’t include local and state government.  The President, 545 politicians and the unelected directors of federal bureaucracies, with a growing iron fist, are controlling approximately 315,000,000 Americans.  Since the adults of that 315,000,000 people get to vote, you would think that it wouldn’t be that difficult to control the President, 545 politicians and the unelected directors.

Under the rules of Saul Alinsky, Obama’s hero, this condition becomes a self-fulfilling prophecy, and the number of takers grows and grows until it overwhelms the ability of the producers to “feed” the growing number of takers.  Add in millions of illegal aliens and what you get is the current condition in most third-world countries.

But this issue has been hashed and rehashed so many times by so many different authors it has become boring.  What’s the solution?  What can the producers do so that they don’t end up being slaves to the takers and all-powerful government?  How do they break up the cabal between the government and the takers?  How do they sever the entangled ties between big government, big business, big labor, big bankers and the one-world-order crowd that want to dissolve American sovereignty, steal our wealth and resources, cut off our energy, flood America with illegal aliens, repeal parental rights and confiscate our land?

Remember the town hall meetings in August of 2009, where the people displayed their anger over the impending ObamaCare legislation?  That was about the time the grassroots Tea Party erupted on the national stage.  Although these events led to a resounding defeat for House Democrats in the 2010 election, we still got ObamaCare from the Democrat Party by lies and deception.  Apparently, the 2009 town hall anger and the defeat of a few House Democrats wasn’t enough to make a needed course correction to a national path that will surely lead to economic collapse, chaos and anarchy.

The government and the takers seem hell-bent on propelling us into oblivion, and there is no current political will to change the suicidal direction we are on.  So how do we trigger a course correction that will truly be effective in restoring our freedom, our national pride and prevent the dissolution of American sovereignty?  We can’t seem to do it by votes.  The takers have an apparent plurality.  And even if all 545 politicians were replaced with new blood, would that by itself be enough to slow down the runaway train we are on?  Not if the politicians pander to the takers in order to keep being re-elected, because the takers have the most votes.

So the solution becomes changing the national mindset on a large enough scale such that the politicians will end up doing the right thing in the interest of saving America from murdering itself ….. OR, the solution could simply be a dedicated minority that will “Declare Open Resistance” against growing government tyranny and will have the commitment and courage to stir the pot so vigorously, at every level of government, that the national mindset will have to shift towards survival rather than self-induced suicide.  That’s a tall order but it has already happened in small parts of America.

It happened at the Jarbidge River in Nevada with the Jarbidge Shovel Brigade.  It happened on the Klamath River in Southern Oregon and Northern California with the Klamath Bucket Brigade. It happened at the Bundy Ranch in Nevada just recently. It is going to happen in Washington State shortly when it is anticipated that over 5,000 gun owners will openly defy the new “I-594 Background Check Initiative” that was just another egregious deception by government and the billionaire backers of the Initiative.  The Initiative was nothing more than a back door into pure gun control.

To not recognize that America is in a state of moral decay and cultural decline and headed for national bankruptcy is putting one’s head in the sand.  However, if you are a taker, you don’t care, just as long as the government checks arrive at your mailbox and you get to vote to keep the checks coming.  This does not apply to Social Security or Medicare recipients because they were forced to pay into the account that now pays them.

However, as a producer, with your income steadily declining to pay for the takers, the problem is paramount.  You know that even if government took all of your income, it would never be enough.  This runaway insanity has to stop and stop soon if national collapse is to be avoided.

If you recognize the problem and the dire implications it has for the nation and for the future of your children and grandchildren, how can you not “Declare Open Resistance” against this growing government tyranny?  America’s salvation rests in the hands of a dedicated minority that WILL “Declare Open Resistance” and has the commitment and courage “to stir the pot so vigorously, at every level of government, that the national mindset will have to shift towards survival as a free nation, rather than self-induced suicide ….. or abject slavery.”

If you are ready to do these things, and we are sure that many of you are, we strongly encourage you to take that pledge and make that declaration in writing, HERE.  This is one simple action (that costs nothing) you can take that will let government know where you stand as a sovereign American citizen.  On a grand scale this action will succeed.  On a small scale, it is doomed to fail.

Ladies and gentlemen, because we care so much about this country, we have taken the lead on this Declaration.  We have sent a signed copy to some high-profile elected officials at the federal level to start, including the de facto President.  We will continue to send our signed Declaration to more politicians and bureaucrats across the country over time so that they know exactly where we stand.  We have made our Declaration.  We have told them, “Not just NO!  But HELL NO!”  Will you?

As our second President said: “Remember, democracy never lasts long.  It soon wastes, exhausts, and murders itself.  There has never been a democracy that did not commit suicide.”

It remains to be seen whether John Adams’ prediction will hold sway for America.  America’s survival could very well rest on those who have the courage to “Declare Their Open Resistance” to the tyrants, educated idiots and political hacks that now rule us.  If you do not think they are tyrants, educated idiots, or political hacks, you do not know history, or you haven’t seen MIT Professor Gruber on TV yet.

But then if you are satisfied with what Obama, our government, the United Nations and the environmentalists are doing to America, no action is required.

One Response to "We Declare Open Resistance To Obama’s Tyranny!"