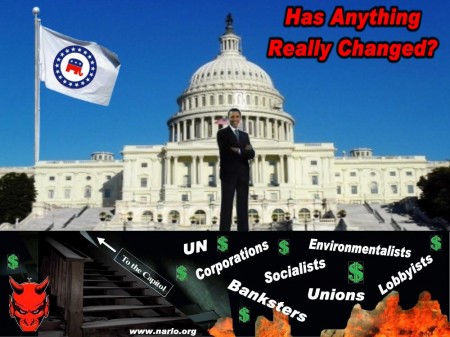 Over half of the American people put Obama into the White House in 2008 and 2012 because they bought into the shimmery mirage of Hope and Change.  They elected an inexperienced narcissist, obsessed with a white-hate complex and convinced that America is evil because of past transgressions.  The voters negligently overlooked his past and associates (that the media covered up), were mesmerized by his flowery words of unity and transparency and taken by the mulatto color of his skin.  They thought by electing a black man they might be healing the wounds of past and present racism.  Now, as the man behind the curtain, Obama’s leadership inadequacies, inexperience and the open sore of racism have been exposed like a bleeding wound, the people switched to the other side on November 4, 2014 in the hope of repairing the damage they caused by their bad decision six years ago.  It remains to be seen if the change they have wrought will make a difference.

As Republicans celebrate their apparent wave of revulsion by the voters for Obama and his party, has anything really changed?  The lobbyists are still there, the ideologues continue to spread their propaganda and the money still flows to those who bend to the will of their own self-aggrandizement and personal enrichment.   Our institutions are corrupt, the country is deep in debt, government spending is out of control, our borders are still wide open, our public schools and colleges have become houses of social and environmental indoctrination and the world is coming apart at the seams in violent conflict, careening wildly towards what could be a Third World War, triggered by radical Islam.   Will the Republicans be able to fix all this, or will they succumb to the siren call of power for power’s sake, as have the Democrats for the last 100 years?  History has told us they will probably succumb.

If there be no party that will fly the flag of liberty, no matter what the cost, then there can be no free America.  If the people themselves do not demand that one party or the other fly that flag with honor, they are responsible for their own enslavement.

It is preordained that the pundits, the Democrats and the Republicans will spin the grand, mid-term election of 2014 from the perspective of their own biases.  Whatever the nature or color of their “spin,” however they shape the tone of their oratory, it only masks the hidden world of power and money that the average individual never sees and which is purposely hidden from them.  We call it the “Moneypow!” underworld.  It is a shadowy world where men (mostly men) pull the strings of the puppets that tell themselves they have power over the masses.  These powerful “Moneypow!” men use money as the lever and greed as the fulcrum and enrich themselves when the money flows, with every flick of a switch or the push of a button.

Mass sums of money are moved back and forth between the “Moneypow!” men by the technology of ones and zeroes that few understand.  A trillion here and a trillion there go completely unnoticed except by those who push the buttons.  Millions and sometimes billions of dollars are earned by an elite few (central bankers), who take a sliver of the monies transferred back and forth.   One-quarter of a point interest adds up to $2,500,000,000 (that’s billion) with a single transfer of a trillion dollars.

It has been reported that America’s Federal Reserve moved $16,000,000,000,000 (that’s trillion) around the world during the financial crisis of 2008, just before Obama took office.  Where did the Federal Reserve get $16 Trillion?  It was magically created out of nothing in the form of zillions of electrons moving through conduits of copper and glass and through the air at the speed of light.  There was no substance behind the fiat money they created and continue to create.  It is backed up by nothing more than the alleged good faith and credit of some country whose good faith and credit could be as ephemeral as a midsummer night’s dream.

People kill other people for a minute fraction of what is earned by the world’s central bankers in less than a second, and as long as the central bankers are free to move money around, they care not who makes the laws, or who is killing each other in the planet’s plethora of wars.  It is in most governments’ interest to allow the central bankers the freedom to move vast sums of money around the world.  It is definitely not in the interests of the pawns that find themselves under the control of the “Moneypow!” men, a closed club of the powerful that only abide by the unseen rules governing a quantum river of fiat money.

So, ladies and gentlemen, will anything be different under the leadership of our Republican representatives in Congress?  Will the flow of vast sums of fiat money stop?  Will Republicans be able, all by themselves, to form the words in Obama’s mouth and cajole him into being a true, defiant and wise leader of the free world, ready to take whatever action is necessary to protect Americans from all enemies, foreign or domestic?  Will they get him to stop Iran from getting nuclear weapons?  Will they get Obama to agree to balance the budget and rein in government spending?   Can the Republicans get him to give up the idea of granting amnesty to 12,000,000 illegal aliens?  Will they get him to firmly close the borders, abide by all immigration laws and quit releasing tens of thousands of criminal illegal aliens onto an unsuspecting public?  Will they convince him to prohibit all flights from the Ebola-torn countries of Western Africa?  Will he sign Republican-backed legislation and finally approve the XL Pipeline?  Will he reverse course on Obamacare?  Will he repeal a lot of the legislation that has killed our economy and driven America’s entrepreneurs into the shadows and corporate monies and jobs over seas?  Will the Republicans be able to get Obama to rein in the IRS, fix the VA, or expose the truth about Fast and Furious and Benghazi?  Will Attorney General Eric Holder’s complicity in the administration’s cover-ups and openly breaking the law be revealed?  Will anyone be fired or go to jail?

After watching Obama’s press conference following the midterm election, we’re not holding our breath.  Obama is as openly defiant as ever and true to his radical ideology.  He will not be moving to the center in his last two years as president and may even move farther left.

Is it possible that the Republicans will embarrass themselves instead, in proxy fights and jurisdictional or ideological disputes?  Or will they, in the spirit of cooperation, cross the aisle to get things done in the interest of the American people and America’s security and prosperity?  Will they live up to their ideals of less government, less regulation, balanced budgets, realistically restrained capitalism and free markets?  Or, will it just be business as usual in the corrupt capitol of what is slowly becoming the American banana republic?

Or worse, will Americans once again, two years from now, switch parties in a landslide to the Democrats because the party in power is not doing what is best for America or isn’t handing out more free goodies to those with their hands outstretched and begging?  Or, will the voters throw out the Republicans because Republican policies are attempting to wean Americans off of government dependency in order to return to fiscal sanity?

In two years, or maybe even less, we will get a sense of the direction of the party of Lincoln and whether they will have the courage to put restraints on Obama’s pen and ‘phone, break the bonds of corruption, resist the temptation of money and the obsession with power.  Will they vigorously take on those who openly undermine and oppose a vibrant, prosperous, free and a sovereign America, including the President?  What the Republicans do and the results obtained from their actions will determine the direction of the presidential election in 2016.

Yes, the Republicans have won this time around, but the question is, what will they do with this apparent victory and what will the positive or negative effects be on the future of America?  What happens in November of 2016 will illuminate the successes or failures of the Republicans who suddenly and unexpectedly found themselves in control of the Congress in November 2014, during the too-long reign of King Obama, the Omnipotent.

2 Responses to "OK, So The Republicans Won. What’s Changed?"