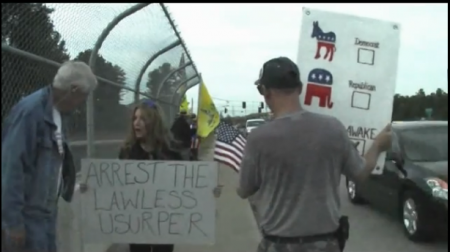 (Nov. 14, 2014) — At an Overpasses for America rally on November 8 in Buford, GA, citizen journalist and eligibility activist Carl Alfred Swensson spoke with numerous attendees as to why they were there and which group, if any, they represented.

Several individuals attended in camouflage carrying firearms, while others held “Don’t Tread on Me” Gadsden flags.

One woman, identifying herself as from “Georgia Security Force 3%,” held a sign which she explained protested “the usurpation of the fraud that is in the White House,” referring to the man known as Barack Hussein Obama.

Others protested the entry of the Ebola virus into the United States, border insecurity, the ailing economy, and infringements on the Second Amendment.

One person held a sign which read, “Impeach Obola.”

Swensson organized the first citizens’ grand jury early in 2009, which found evidence that Obama had committed treason and other crimes against the United States by his alleged usurpation of the presidency.  Three years later, a law enforcement investigation declared that Obama’s long-form birth certificate and Selective Service registration form are “computer-generated forgeries,” about which the White House has made no comment.

Obama’s constitutional eligibility was questioned beginning in December 2007 when MSNBC commentator Chris Matthews stated on air that Obama was “born in Indonesia” in a discussion of Democrat presidential primary contenders, specifically, Hillary Clinton.  During the discussion, Matthews raised the possibility that Clinton would use that alleged fact “in an attempt to undercut his candidacy.”

Obama has been proven to have lied about Obamacare, which has further been exposed as a hoax on the American people by “architect” Jonathan Gruber in recent days; the terrorist attack on a CIA compound in Benghazi, Libya, where four Americans were killed; his commitment to “the Constitution” whereby he promised not to circumvent Congress as he claimed his predecessor, George W. Bush, had; and the IRS’s targeting of Obama’s perceived political enemies.  Rather, in February, Obama said on national television that there was “not even a smidgen of corruption” at the IRS.

Discussion of Obama’s impeachment is now in the mainstream, with some Republicans rejecting it and others suggesting that if Obama declares, by executive fiat, that millions of illegal aliens will not face deportation proceedings in accordance with existing federal law, the grounds for impeachment would be constitutionally firm.

Articles of Impeachment have been written by the United States Justice Foundation (USJF) and the North American Law Center (NALC) and submitted to the House Judiciary Committee.

Democrat members of Congress have suggested that the Republicans in the House will vote in favor of impeaching Obama.  The charges set forth in Articles of Impeachment would then have to be taken up by the Senate, which acts as the trial court during impeachment proceedings.

On November 4, Republicans won a majority of seats in the Senate and increased their majority in the U.S. House of Representatives.  Republicans also gained governorships in Massachusetts, Maine, and Maryland as well as seats in state legislatures formerly long held by Democrats.

On Friday morning, a comment on Twitter reads, “BHO’s entire presidency has been a continuing stream of lies/walk backs, starting w/OCARE & ending w/OCARE.”

Overpasses for America was founded by James Neighbors and has become a national movement.

The title of Swensson’s video is “America is finding a voice.”

4 Responses to "“Arrest the Lawless Usurper”"