FOCUS ON STOPPING GLOBAL WARMING IS UNSCIENTIFIC AND IMMORAL 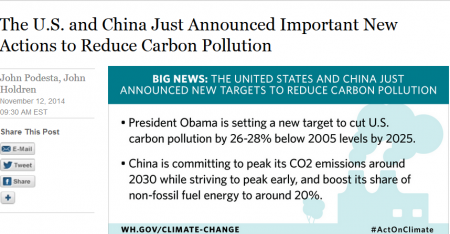 (Nov. 13, 2014) — A glance at the White House web site reveals the degree to which the administration is misrepresenting the global warming issue. Under the headline, “A Plan to Fight Climate Change“, we are told that “We have a moral obligation to lead the fight against carbon pollution.”

President Obama’s more important moral obligation is to inform the American public about the actual state of this poorly-understood field. The last thing he should be doing is using the misleading language of Greenpeace and Al Gore.

Yet that is precisely what the administration did on Wednesday concerning the new greenhouse gas emission reduction agreement with China.

Highlighted in Wednesday’s “Top News” section on the White House home page appears the article “The U.S. and China Just Announced Important New Actions to Reduce Carbon Pollution,” co-authored by John Podesta, Counselor to the President, and Dr. John Holdren, Obama’s science advisor. “Carbon pollution” is referenced repeatedly in the article as it is in the President’s speeches and in his climate change action plan. Obama even mentioned “carbon pollution” during this week’s joint press conference with Chinese President Xi Jinping.

But “carbon pollution” is doublespeak, what the Merriam-Webster dictionary defines as “language used to deceive usually through concealment or misrepresentation of truth.” By “carbon pollution”, Obama really mean carbon dioxide (CO2), an invisible, odorless gas on which all life depends. Grade school students know that CO2 is not pollution; it is aerial fertilizer.

That’s why commercial greenhouse operators routinely run their internal atmospheres at up to 1500 parts per million (ppm) CO2 concentration, a consequence of which is that plants inside grow far more efficiently than at the 400 ppm in the outside atmosphere. “Biological Impacts”, a report from the Nongovernmental International Panel on Climate Change that cites over 1,000 peer-reviewed studies, documents rising productivity of forests and grasslands as CO2 levels have increased, not just in recent decades, but in past centuries.

Increasing CO2 levels pose no direct hazard to human health either. CO2 concentrations in submarines can reach levels well above 10,000 ppm, twenty-five times current atmospheric levels, with no harmful effects on the crew.

Podesta helped guide environmental policies under President Clinton, and Holdren holds advanced degrees in engineering and physics, so it is difficult to believe that they do not appreciate CO2’s true nature. It appears that they are calling the gas “carbon pollution” to sway the public into thinking of CO2 as something dirty, like graphite or soot, solid substances that really are carbon. No one should buy into this trick. It must always be called ‘carbon dioxide emissions,’ ‘CO2 tax, ‘CO2 treaty,’ etc., to help people remember that, independent of its possible impact on climate, CO2 is an invisible gas essential to plant photosynthesis.

Obama, Podesta, and Holdren should also explain to the public that we are actually near the lowest level of CO2 in Earth’s history. During a multi-million year period around 440 million years ago, CO2 was about 1400% of today’s level while Earth was stuck in the coldest period of the last half-billion years. At other times it was hot when CO2 levels were high. At still other times, it was neither unusually hot nor cold. The geologic record, in addition to the recent 18-year hiatus in global warming, a period during which CO2 levels have risen 9%, indicates that Earthly temperatures are not driven by CO2. Not surprisingly, there is no hint of any CO2-induced warming in greenhouses either.

Besides the waste of billions of dollars and the loss of thousands of jobs as America’s coal-fired electricity generating stations are closed to supposedly stop climate change, there is another tragedy unfolding. As a result of the unjustified confidence that we know the future of climate and, even more outrageously, that humanity can control climate merely by tinkering with our CO2 emissions, relatively little money is available to help the poor adapt to climate change today.

Of the roughly one billion U.S. dollars spent every day across the world on climate finance, only 6% of it is devoted to helping vulnerable societies adapt to climate change. The rest is dedicated to trying to stop climatic events that may someday happen.

This week’s U.S.-China Joint Announcement on Climate Change will reinforce this situation since, aside from a very brief reference to “building resilience” towards the end of the agreement, adaptation was completely ignored.

This mistake, the valuing of people yet to be born more than those suffering today, is the real moral issue that should concern the President.