“JUDICIAL TYRANNY WILL DESTROY US ALL”

In a radio broadcast, Hoyt said that at Trussell’s arraignment on Thursday, which Hoyt attended in person, Hankinson denied Trussell a requested Bill of Particulars detailing the allegations against him.

Hoyt reported that Hankinson insisted that Trussell have a government-appointed or other attorney to represent him.  Trussell said that he had expected that as a pro se defendant, the court would cooperate with him and “make allowances” for his non-lawyer status.  Instead, he said that Hankinson indicated that “they will fight me every step of the way.”

Trussell was impaneled into the Dixie County grand jury in April and volunteered to be the foreman. Trussell observed that state’s attorney Jeffrey Siegmeister kept the other grand jurors’ identities secret and called the group of citizens “my grand jury.”

On August 1, the Dixie County grand jury was to deliberate over evidence of a crime brought to Trussell by a concerned citizen during which Siegmeister insisted on being present with other court personnel in violation of Florida statute.

The common-law grand jury produced two True Bills, which Trussell brought to court clerk Dana C. Johnson, who stamped and filed them, assigning each a number.  In the ensuing days, two Florida Department of Law Enforcement (FDLE) officers interviewed Trussell, with one producing an affidavit claiming that Trussell had committed ten felonies relating to “simulating a legal process.”

On September 2, Trussell was arrested and spent a night in jail, after which he made bond at $500. 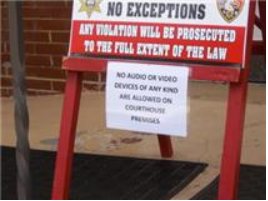 A similar sign was erected outside of the Monroe County, TN courthouse after CDR Walter Francis Fitzpatrick, III (Ret.) attempted to take notes with a fountain pen at the trial of George Joseph Raudenbush, III in August 2011 but was forced to leave the courtroom.  A reporter with a hand-held recorder known to be friendly to the government in the Tenth Judicial District was allowed to remain.

Raudenbush spent more than two years in state prison when a Tennessee appellate court found that now-retired Judge Carroll Lee Ross denied Raudenbush his constitutional right to defense counsel.  His case is scheduled to be retried in Monroe County this month, with Raudenbush represented by a Tenth Judicial District public defender.

Raudenbush and other missionaries attempting to distribute literature about local corruption were physically threatened, with Raudenbush almost losing his life at the hands of unknown assailants suspected of having been dispatched by then-Monroe Sheriff Bill Bivens.

The Post & Email has likened Monroe County to “a penal colony.”

Fitzpatrick has described Monroe County and McMinn County, both part of Tennessee’s Tenth Judicial District, as ruled by a “dictatorship of the judiciary.”  Fitzpatrick is now imprisoned at the Bledsoe County Correctional Center (BCCX) after having been convicted of “aggravated perjury” and “extortion” for trying to bring to the attention of the McMinn County grand jury that judges, prosecutors, the grand jury foreman and law enforcers have been breaking the law.

After the grand jury turned on Fitzpatrick and issued an indictment with four charges against him, Fitzpatrick’s constitutional attorney, Van Irion, was not immediately provided a Bill of Particulars.  When the document was provided, it was vague and contained no specific dates and times on which he allegedly committed crimes.

At the trial, no evidence was presented that Fitzpatrick had committed perjury, and no police report or criminal complaint had ever been filed, at the admission of chief witness Jeffrey Cunningham.

North Korea and Cuba both jail political dissidents or anyone suspected of being disloyal to the Communist Party.  North Korea operates prison camps in which slave labor is performed by prisoners, including children, who are routinely beaten, starved, tortured and murdered.

Cuba is well-known for its torture and imprisonment of political dissenters and repression of its people since Fidel Castro became dictator in 1959.

During the August 19 sentencing, Judge Jon Kerry Blackwood declared Fitzpatrick “a moral coward” and said he would prefer to have been slapped in the face than accused of wrongdoing in a grand jury submission such as Fitzpatrick’s.  At the sentencing hearing, Blackwood said that Fitzpatrick had not “learned his lesson.”

The court has not allowed a copy of the audio-recording to be released to this writer or to a resident of Tennessee who requested it under the Tennessee Open Records Act.

On October 20, Blackwood denied Fitzpatrick’s motions to suspend judgment and requesting a new trial for lack of jurisdiction by the court.

In an interview with Trussell after his release, Trussell said that he received “letters from all over the country” while he was incarcerated for 21 days, for which he said he was very grateful.

Trussell said that there are numerous statutes and rules which contradict each other which the judiciary uses against “the people.”  “Only we can fix it,” he said of the “corrupt” judicial system.  “We simply have to stand up and say ‘No, no more; this is it; you’re done,'” Trussell said.  “We can turn this around.”

Trussell also described his jailing at the arraignment hearing on October 9, during which Hankinson charged Trussell with “failure to appear” after Trussell “shouted out” several times, “I am here” when his name was called in court.  “Then he declared me absent,” Trussell said, after which the bailiffs removed handcuffed him and led him out of the courtroom.

Former prosecutor, constitutional scholar, speaker, author and radio host KrisAnne Hall appeared on Hoyt’s show and stated that Trussell’s treatment was “a complete insult to due process.”  She said that prosecutor Willie Meggs had “falsely prosecuted [Liberty County Sheriff] Nicholas Finch,” who was exonerated of alleged wrongdoing by a jury exactly one year ago.

Hall addressed Hankinson’s assertion that Trussell “is not competent” to represent himself shows that he is not familiar with the U.S. Constitution.  Hankinson evidently said he would hold with a “one-sided trial.”

“Can you imagine living in a society where the government is so corrupt that every attorney is in fear of retaliation from the government and then you can’t get defense?” Hall asked.

In Tennessee’s Tenth Judicial District, Fitzpatrick has found that defense attorneys, including those in the public defender’s office, are part of the corruption which jails citizens in a “prisoners-for-profit” scheme, whether or not there is evidence that they committed a crime.  Grand juries are illegally constructed with the presence of judicially-selected foremen who are acquainted with the criminal court judge making the selection, although court rules state that the foreman “must possess all of the qualifications of a juror.”  By state law, jurors cannot serve consecutive terms.

Hall said that Trussell should have offered bond and that Meggs carried out a “vindictive prosecution,” the same claim made by Irion in Fitzpatrick’s latest case in McMinn County.

Hall said that the denial of a Bill of Particulars to Trussell showed that Hankinson “doesn’t understand the Constitution.”

An observer to Thursday’s arraignment said that the judge is carrying out “judicial tyranny.”  “I hope that this judge winds up in jail for what he’s done,” the observer said.  Of the judge’s attempts to declare Trussell “incompetent” to represent himself, the observer said, “They think they’re God.  They think that they have the power over the people; it’s the other way around.”  He said that Hankinson’s behavior is the same as that of the British Crown over the 13 American colonies which rebelled and fought a revolution for the sake of liberty.

“Judicial tyranny will destroy us all…just because you object to something…They’ll claim some bogus charge on you that they’ve made up and they’ll arrest you, and you’ll be subjected to this kind of judicial tyranny and probably wind up in prison…Time for the people to rise up,” the observer said.  He added that Hankinson claimed that he had not “seen” Trussell raise his hand and state that he was present in the courtroom on October 9.

Fitzpatrick was jailed six times in Monroe County after he exposed long-serving grand jury foremen and rigged juries put in place by corrupt judges.  After the McMinn County grand jury issued its indictments in March, Fitzpatrick was jailed and made bond.  Following the sentencing hearing on August 19, he was handcuffed and jailed in McMinn County, then transferred to BCCX.  He is eligible for parole on March 4, 2015. 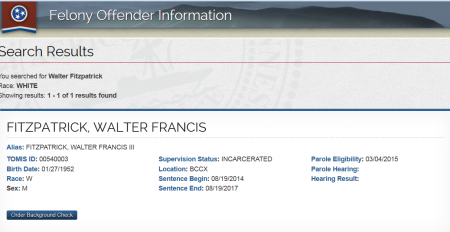 “It’s going to take large numbers of people,” Fitzpatrick had told The Post & Email and others on numerous occasions, to awaken Americans to the tyranny of today’s judiciary, which extends to the federal level.  Over the last five years, only a relatively few number of people have appeared to understand why Fitzpatrick was willing to go to jail and prison to demonstrate the corruption in the courts which has deprived not only him, but thousands of Tennesseans and citizens of other jurisdictions their freedom without due process.

What Do Dixie County, FL and Monroe County, TN Have in Common? added on Saturday, November 1, 2014