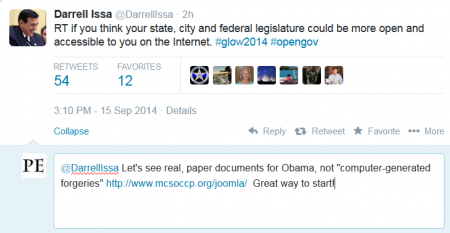 (Sep. 15, 2014) — On Monday, Chairman of the House Oversight and Government Reform Committee Darrell Issa asked followers to retweet his tweet if “you think your state, city and federal legislature could be more open and accessible to you on the Internet.”

One of the hashtags to which Issa linked in his tweet was #glow2014, which stands for “Global Legislative Openness Week.”  The other was #opengov, which leads to another tweet of Issa’s which states, “I’ve made an open US Congress one of my top priorities to increase citizen participation in lawmaking.”

On July 17 of that year, Zullo and Arpaio held a second presser in which they stated that the forgery of the birth certificate image had surpassed the criminal standard of probable cause.  In May 2013, Zullo told The Post & Email in an interview that the image was fabricated “with the intent to deceive.”

The mainstream media has failed to report the findings of the posse except on the internet and refused to ask questions about Obama’s background.

Whether or not Obama is a “natural born Citizen,” as Article II, Section 1, clause 5 of the U.S. Constitution requires for the president and commander-in-chief, is still unknown.  Obama claims to have been born to a father who was never a U.S. citizen in Honolulu, HI on August 4, 1961, but no hospital in Hawaii, or anywhere in the United States, has claimed his birth.

In February of this year, Zullo announced on Carl Gallups’ “Freedom Friday” show that a second criminal investigation had been opened by Arpaio to delve into matters related, but not focusing on, the long-form birth certificate forgery.  Zullo also stated that the posse had discovered that several Obama operatives are employed at DARPA, a division of the U.S. Department of Defense which develops robotics, artificial intelligence and psychological warfare strategies.

Since Obama’s ascension to the White House, internet personalities have populated various websites in an apparent attempt to spread propaganda to quell suspicions that Obama is hiding information about his past.

Although Zullo and Arpaio urged a congressional investigation in their second press conference, none appears to have been launched.  Members of Congress who oppose Obama’s policies have chosen instead to challenge him there rather than seek the truth about his background and eligibility.

Several weeks ago, a very reliable reader of The Post & Email reported that while engaged in a conversation with a congressional staffer, the staffer told him, “We know the birth certificate is a fake.”

Chairman of House Oversight Committee Asks for Input From Citizens on Accessibility of Government added on Monday, September 15, 2014