This Is a Call to Action! 3 Minutes of Your Time is all I Ask – For 3 Phone Calls pb

WITH THE WORDS TO SPEAK PROVIDED 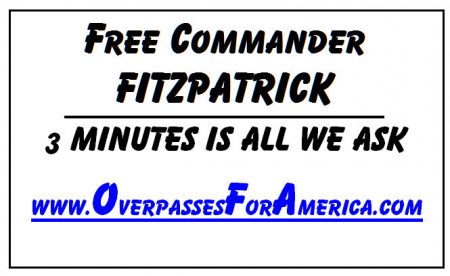 (Jul. 25, 2014) — [Editor’s Note:  The following has been sent to James Neighbors, president of Overpasses for America, with the request that signs such as that which is shown at right are held up by participants in the next protest against illegal aliens in the country on August 2 and displayed on his website.]

Citizens for the Constitution;

This is a call to action! 3 minutes of your time is all we ask – for 3 phone calls … with the words to speak provided.

On June 24, 2014, a judge in Tennessee held a ‘Kangaroo Court Show Trial’ wherein the grand jurors were intimidated and compromised; the prosecutor misrepresented the facts; the judge (Jon Kerry Blackwood) was predisposed and biased against the defendant, LCDR Walter Fitzpatrick USN (Ret); and there was no accuser!  Unbelievably, it concluded with a verdict of Guilty of ‘extortion’ (although nothing was ‘extorted’ from anybody) and ‘aggravated perjury’ (although the only persons who lied were the Judge and the prosecutor)!

LCDR Fitzpatrick was found ‘GUILTY’ of these crimes that were never committed, and is to be sentenced on 19 August 2014 … for trying to exercise his (and your) Constitutionally guaranteed 1st Amendment right to report crimes of Judicial Misconduct to a Grand Jury.

We all must be outraged by this gross miscarriage of justice and attack on our 1st Amendment rights! You can read the details as reported by Sharon Rondeau of The Post & Email here: www.thepostemail.com/2014/06/30/should-judge-blackwood-be-criminally-prosecuted/

3 minutes of your time is all we ask – for 3 phone calls … with the words to speak provided.

We are therefore asking everyone who is physically and mentally able to make three quick calls, preferably weekdays between the hours of 10:00 am and 4:00 pm EST (so you get a live person to talk to):

Suggested words for a statement to the telephone receptionist for each of these two committees:

“My name is ___________.  As a concerned Citizen, I feel it is my duty to report to you that a jury in Tennessee’s Tenth Judicial District has recently criminalized a citizen’s attempt to take a petition for the redress of grievances to a grand jury.

On June 24, 2014, honorably retired US Navy Lt. Commander Walter Fitzpatrick was found Guilty of crimes that were never committed: ‘extortion’ – where nothing was extorted, and ‘aggravated perjury’ – where there was no proof of any perjury.

All other State agencies and the Knoxville FBI have refused to take action against these and other well-documented cases of civil rights violations against Tennessee citizens. It is the duty of your committee to investigate and take appropriate action concerning these violations of Constitutionally guaranteed rights of American Citizens.”

Suggested words for a statement to the telephone receptionist for Judge Blackwood:

“My name is __________. As a concerned Citizen, with certain Constitutionally guaranteed rights, I demand that the June 24 verdicts in the Lt. Commander Walter Fitzpatrick case be vacated. Because of the egregious violations of law, lack of evidence and conflict of interest exhibited during the trial, the entire case should be dismissed and the jurors prosecuted for malfeasance. Thousands of us concerned Citizens have also so notified both the U.S. House and Senate Judiciary Committee Chairmen of this miscarriage of justice.”

3 minutes of your time is all we ask!

One Response to "This Is a Call to Action! 3 Minutes of Your Time is all I Ask – For 3 Phone Calls pb"