“THIS IS GOVERNOR PATRICK’S FAULT!” 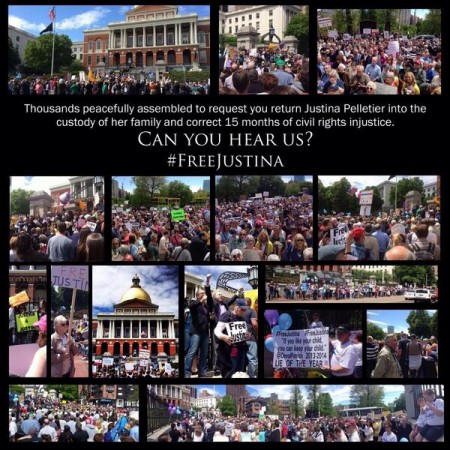 (May 26, 2014) — On Saturday, Justina Pelletier celebrated her 16th birthday at a facility in Thompson, CT, instead of with her family from West Hartford while a rally was held on the steps of the Massachusetts statehouse in Boston’s Beacon Hill section.

Mahoney said that parents know what is best for their children, not the government. “Shame, shame, shame!” the crowd responded.

“Things are beginning to happen,” Mahoney stated.  “For the first time, they have put a reunification plan together…On May 30th, there is a critical meeting that the Pelletiers hsave with the medical team and DCF.  If things go well, a motion will be filed and there is the hope and possibility that Justina could be returned as early as the first part of June.”  Following raucous applause, Mahoney told attendees to “continue to call the governor,” Deval Patrick, who he speculated “was probably hanging out by the pool.”

In February of last year, Justina was forbidden to leave Boston Children’s Hospital after two doctors who barely knew her determined that her parents were not following the proper course of treatment.  Justina’s father Lou described the hospital as having “kidnapped” his daughter when he was not allowed to discharge her to return her medical care to Tufts Medical Center, which had diagnosed her with mitochondrial disease two years before.  The BCH doctors believed she had somatoform disorder and reportedly sent her to a “locked psychiatric wing” of the renowned children’s hospital which then became Justina’s prison after Massachusetts DCF assumed legal custody of her.

The parents were placed under a gag order; however, seeing his daughter’s health rapidly deteriorating, Lou spoke to the media in late winter, and the story became headline news in the national and international media.

Massachusetts gubernatorial candidate Mark Fisher attended Saturday’s gathering.  Fisher has vowed to “free Justina” on his first day in office if he is elected in November.

At about 23:00 into the video, Mahoney said a prayer for Justina and other parents “facing a similar situation.”  Justina has grandparents who she has not been able to see for 16 months.  Mahoney reported that Justina has not been allowed to attend mass or receive education while she has been a captive of Massachusetts DCF.

Despite her move to the facility in Thompson, CT approximately two weeks ago, Justina is still housed in a psychiatric wing which her family says is inappropriate for her given her medical needs.

Mahoney introduced Massachusetts State Rep. Jim Lyons, who provided 16 pink roses for Justina’s 16th birthday. Lyons blamed Deval Patrick for “deciding without a trial, without a jury” that the Pelletiers were unfit to care for Justina.  He accused Patrick of circulating “bad things that were lies about Lou and Linda Pelletier.” “This is Governor Patrick’s fault!!” Lyons shouted emphatically.  Lyons praised Lou Pelletier for “standing up to the bureaucracy in Massachusetts.”

Lyons said that Patrick violated the civil rights of Justina’s parents and then commanded him to “Let Justina speak!” a chant then taken up by the crowd.  He shouted that separating children from their parents “is not America.”  “That is Governor Patrick’s America…” he said.

The crowd then chanted, “Deval must go!!!”

A month ago, Mahoney confronted Patrick while he was going into a meeting in Boston about Justina’s separation from her family.  Patrick responded that he would speak with Mahoney off-camera and that the courts, not he, had authority to return Justina to her home.

Obama has begun promoting Patrick as a presidential candidate for 2016.

A local Fox station provided coverage after the rally.

Lou Pelletier then spoke emotionally about how Justina was taken away from his wife and him.

Pelletier said he met in Washington with his U.S. congressman, John Larson, who reportedly told him that he had encountered a similar situation “with his own son.”  “If he wasn’t a congressman, his son would have been taken away,” Pelletier said.

At 38:00, someone “Lou for Congress!” someone shouted.  “You gotta go to Congress,” another laughed.

“If you’re the president, you don’t need any credentials!” someone else shouted.  “Obama’s showing a birth certificate!!” someone else said.  “It’s OK now; what do you want?” Lou responded.

He later said that “Unfortunately, Justina, as we’ve all found out, is the tip of the iceberg.  It’s happening every day in every state in this country.”

“The abuse of power by government has got to end,” Pelletier said.  He then said that Justina has suffered “chipped teeth from force feeding” and other abuses at the hands of Massachusetts DCF.

When Fisher spoke, he said “common sense” is all that is needed to return Justina to her family.

There will be another rally for Justina’s return to her family on Wednesday, May 28 at 12:00 p.m. outside of the Massachusetts DCF office at One Ashburton Place, Boston, MA 02108.

Kuhner later decried the fact that Patrick “honestly thinks he can be the next president of the United States.”  “I’m giving you a warning…If something should happen to Justina Pelletier because you did not release her from the clutches of DCF, God forbid, I will hold you personally responsible!” he said to raucous applause.  “I’m going to call for you to be charged as a criminal and sent off to prison.”

At 1:10, the crowd sang “God bless America,” with one long singer hitting the high “do” at the end.