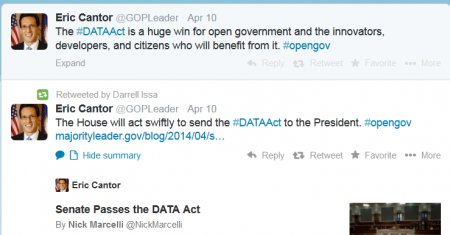 (Apr. 16, 2014) — On Wednesday, a tweet by House Majority Leader Eric Cantor (R-VA) celebrated the passage of the “Data Act” in the U.S. Senate last Thursday and stated that “The House will act swiftly to send the #DATAAct to the President.”

The Data Act seeks to “transform the U.S. government’s spending information from inaccessible documents into open data.”  It will make available to the general public financial reports, provide for “better transparency,” and will reportedly “allow Big Data analytics to illuminate waste and fraud.”

Cantor added in another tweet that “The #DATAAct is a huge win for open government and the innovators, developers, and citizens who will benefit from it.”

On March 1, 2012, Obama’s long-form birth certificate and Selective Service registration form were announced to be fraudulent by a six-month criminal investigation carried out by the Maricopa County, AZ Cold Case Posse.  More than two years later, a second investigation into related matters has been revealed to have been conducted by Maricopa County Sheriff Joe Arpaio, who reportedly will announce “universe-shattering” discoveries in the near future.

Virtually, if not all, members of Congress have been made aware of the posse’s conclusions through the distribution by volunteers of “Sheriff’s Kits” last fall as well as through the U.S. mail.  Not one member of Congress has publicly said that he or she will launch or has launched an investigation into why fraudulent documentation would have been presented to the public on Obama’s behalf “with the intent to deceive,” according to lead investigator Mike Zullo.

The mainstream media has refused to publicize the posse’s findings and continues to refer to Obama as if there is no problem with the forgery which is still posted on the White House website.  In fact, mainstream outlets still characterize the forgery as “a conspiracy theory” having to do with Obama’s place of birth rather than the falsification of a government document, which is a felony.  “The president was born in Hawaii.  The White House has released Obama’s long-form birth certificate,” reported The Washington Examiner after Obama joked about the controversy last week while addressing the National Action Network.

Zullo has stated that members of the media have been intimidated, threatened with their jobs, and worse, if they were to report on the posse’s findings or conduct independent investigations of Obama’s documentation.  Earlier in the investigation, he reported that one journalist left the country with her family after receiving some type of threat over her possible examination of the issue.

Veteran reporter Sharyl Attkisson told Bill O’Reilly last week in an interview that she perceived that the Obama regime had sought to quash certain reports from being published which it viewed as “controversial.”  In 2009, Obama’s former communications director, Anita Dunn, had proudly said that the campaign had “controlled the media” and the message it put forth about Obama’s candidacy.

As of press time, neither Cantor nor Issa’s spokesmen have issued a response to our question.

Whether or not Obama is constitutionally eligible to serve remains unresolved, as any American needing a certified copy of his or her original birth certificate should be able to obtain it for between $10.00 and $35.00 from the registrar’s office in the state of his or her birth.

On April 22, 2011, Obama’s attorney, Judith Corley, reportedly traveled to Hawaii to obtain two certified copies of Obama’s long-form birth certificate to presumably prove his eligibility to hold the office of president, but the image posted on the White House website on April 27, 2011 has been declared a “100% forgery.”  Questions remain as to whether or not Obama is even a U.S. citizen, let alone the higher standard of “natural born Citizen” required by Article II, Section 1, clause 5 of the U.S. Constitution.

Rather than probe why Obama has presented forgeries as his official documentation, members of Congress have proposed various pieces of legislation in an apparent attempt to have the courts force Obama to observe constitutional limits.

If Obama is not a “natural born Citizen,” he has not observed constitutional requirements from the day he declared his candidacy in February 2007 and possibly before.  If the “universe-shattering” information proves that he was never eligible to hold the office of president, then everything he has signed or done would presumably be nullified.

When will the “U.S. government” investigate and make public that “fraud?”