“TO THE BRINK OF WAR AND ECONOMIC COLLAPSE” 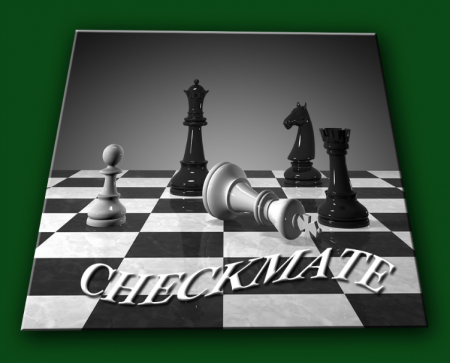 If some alien being were to drop in here on our planet and see this smoldering mess we call earth, after his first reaction of get me the heck out of here, he might sense the feeling of sorrow for any civilized world leader who was in charge of fixing it.  It would, no doubt, appear that the place is in such calamity, there just isn’t any way out.

But what our space-traveling observer would not know is this mess was caused by the very individual who seems to be responsible for fixing it.  And unfortunately, responsibility is an alien concept to this leader.

As in every chess game ever played the situation always arises when there is no viable move. And now America and her allies find themselves in a tumult from which escape may mirror the inevitable consummations of the chess end game.  Alas, the Grand-master will always defeat the checker player and the community organizer’s own evil will always crumble in the face of the proficient one.   In this real world game, your team gets no trophy for just showing up.

This incompetent, dishonest, deceitful narcissist who has illegally usurped the Presidency of this once great country had no credentials for taking on the job of leader of the free world.  He knew it, his socialist supporters knew it and we the people knew it.  Now, we as well as the rest of the world, are and will be paying for it.

Posterity, if there will be posterity, and they are able to ask, “My God, how did they ever let this happen?” we can only pray they will understand enough to avoid its recurrence.

Let us look back now at how this inexperienced, unqualified amateur was allowed to take this country and the world to the brink of war and economic collapse:

At the end of this article we have listed his lies and deceptions, not quite in chronological order but in two parts. The first part enumerates lies known before he was elected.  The second part, after.  We understand that most of us know of  these and don’t need to read them again.  But for those who may not, they are there in all their glory.  We have also made a document which can be downloaded and presented to your Obot friends.

Facts of human nature and life:
The one time presentation of information for the purpose of education or  in support of a position or an idea which has been proffered without due diligence regarding the facts, would direct the recipient of such deficient data to future skepticism.   That purveyor, if such carelessness or errors were not repeated, and if it was believed not to have been an intentional deception, could recover and regain the respect of those he must convey information to or communicate with.

But:
Not so with an intentional lie.  The liar possesses a deep character flaw, one that shouts to the universe and travels for infinity through space and time, never to dissipate.  Once deceived, never again believed.

If he lies about something, he will lie about anything.

In one’s personal life, involving family and friends, a known liar disrupts his small environment with minor consequences.  He may in fact pass through his existence oblivious to  how he is perceived.  In the business world the distrust one earns with dishonesty has deeper ramifications, but again, without any significance outside his or her localized domain.

However…..When a liar leads a country and that country is looked up to and relied upon by other countries, his character flaw imperils not just his own nation but all other nations as well.  If anyone should doubt that peril, just have them look anywhere, home here in America or abroad.  In just six short years the world has begun to deteriorate round us.  No world leader, good, bad or the very bad, either respects today’s American leader or believes a single word read from his teleprompter.  How could they?

President G. W. Bush for example, found himself relentlessly under attack and called a liar by the Socialist Democratic Party and their propaganda ministry, better known as the Main Stream Media.  This onslaught resulted because no significant discoveries of weapons of mass destruction were found in Iraq.   Some may say Bush was wrong. Bush did not lie; he told the people what he was told by various intelligence organizations around the world.

It now appears he neither lied nor was he wrong.  The truth is now coming out.  There were plenty of weapons of mass destruction in Iraq.  But that is another story.  While George Bush may have disappointed many of us with his watered-down conservatism and his failure to stay in the fight his last few years, he will always be respected for his honesty and integrity.  History will treat President Bush well.

Not so, the impostor now misleading the planet into economic destruction and a possible world war. A little edification for the Obots who will be emailing.  There is a big difference between an error and a lie.

Webster’s Dictionary describes a lie like this:
1. A false statement made with deliberate intent to deceive; an intentional untruth; a falsehood.

Obama has a certified history of lies, falsehoods and deceptions.  One might forgive the Socialist Democratic Party and the news media for supporting this leftist darling of theirs if his character was not known or if it was hidden prior to them giving him their support.  Unfortunately his lying ways were not hidden.

His Lies Defile the Worth of a President and Imperil the World added on Monday, March 17, 2014