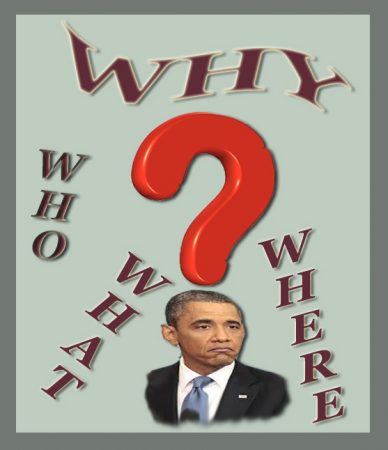 (Mar. 7, 2014) — Over these past six years this country has witnessed the most unbelievable “sticker shock” imaginable.  As we awake this morning and face yet another new day filled with more unemployment, America’s health care system eroding to third world-ism, the danger of growing Islamic terrorism, despots and Communist dictators threatening and invading their neighbors, even those who drank the first few batches of Kool-aid are beginning to ask, “Why?”

The WHY question should not be directed at the news media for their failure to properly vet the most incompetent, inexperienced phantom ever to run for the US presidency.  Their actions, or lack of actions, have been and continue to be ruled by the color pallet. Brown complexion, red politics.

The WHY question need not be applied to the Socialist Democratic Party, which has long ago expelled God and replaced Him with a new religion of power, control and political skulduggery.  Everyone and everything has become expendable in this “creed of greed.”

The WHY question is evident when applied to the Judicial system and those impostors posing as the protectors of the rule of law. Intimidation, extortion and fear of an all-too-powerful government have transformed those entrusted with balancing the scales of justice with balancing on the edge of a metaphorical or physical precipice.

The WHY might also be wasted when presented to the GOP, so-called Conservative commentators and talk show hosts.   Clearly, all their bluster and all their rantings are performed under the close supervision of those empowered to keep the boat from rocking, while ignoring the iceberg for which the ship of state is headed.

So if the WHY is known and understood for the above-referenced entities, where, then, should it be asked?  Let us start here.  Barrack Barry Hussein Soetoro Obama,  WHY?

All of these things are deceptions, lies and manipulations of fact and history.  A few of them are crimes, punishable by huge fines and long terms in prison.  What is it, then?   What could be dwelling in this impostor’s past that is so bad, that he would risk breaking all these laws and possibly going to prison for, in order to hide?

Talk show hosts, judges, politicians and the whole miserable lot of enablers and traitors, the WHY may be on menu.

Beware, the Ides of March.

*Proven to be forged. Zero doubt.