OPEN YOUR EYES, USE YOUR COMMON SENSE, EXAMINE THE FACTS, AND APPLY SOME INTELLECTUAL HONESTY

by TPATH Contributor “The American Patriot” 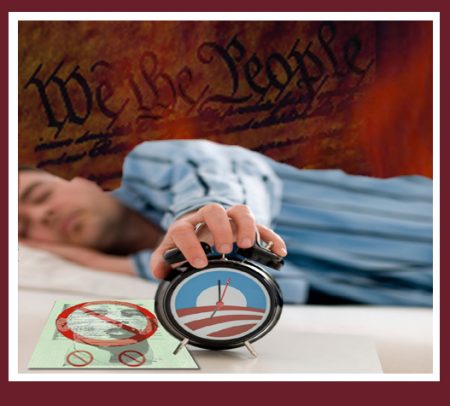 (Feb. 26, 2014) — Somehow, some way, I would hope that this article would be disseminated throughout the land and read by all Americans.  No doubt read enthusiastically by those patriots who fully understand the frightful course our country is taking, this essay will nevertheless be ignored by the vast majority of citizens who blissfully go about their lives unaware that their country has been hijacked and that their freedom and liberties are being stolen by the very people that have been entrusted to preserve and protect them.

Many of these unenlightened can be characterized quite simply as stupid and ignorant; constituting the vast majority of the Democratic/Socialist/Communist Party’s voting base here in America.  They are the clueless who go to the polls and negate the votes cast by the informed voter. They are the brainwashed or brain-dead; the “me first” voters.

Then there are the haters; those who will simply deride and demean this message.  These are the spiteful, malevolent Marxist/Communists types, the “give me more” entitlement voters, the social justice aficionados, the intolerant anti-life, anti –Christian crowd, the self-professed victims,  the global warming fanatics and the myriad of progressive social engineering freaks and miscreants who are waging a vicious and unrelenting  war against traditional American Christian and family values.   Theirs is a nasty “win at all costs” campaign driven by intolerance and hate, deceit, lies, insults and intimidation.

This despicable and ungrateful lot is readily discerned.  They are all around you.  Simply put they are the Obama androids.  They are the herd that refuses to look at the truth, refuses to be intellectually honest, ignores common sense and will never allow facts to illuminate or fertilize their  feeble minds lest it interfere or defeat their “at all costs” agenda.

These are the true haters of America; they despise the Constitution and the foundational principles upon which this country was founded and they despise you and any other person who dares get in their way.  They are the Obots and they are led by America’s number one enemy:  Barack Hussein Obama, purported 44th president of the United States and the principal conspirator and perpetrator of the greatest crime ever committed against the American people.

They lack a personal sense of ethics and moral responsibility.  They are incapable of maintaining any allegiance and loyalty to the citizens; they are incapable of accuracy and truthfulness.  They are hypocrites of the highest order, blinded by skin color and their socialist/new world order agenda; they are undoubtedly the biggest reason why the truth about Obama’s identity has not been widely reported in the mainstream media.  There are others who are culpable in this massive cover-up but the mainstream media outlets and these so-called journalists have done a masterful job of hiding the truth from the American masses.  Shame on them.

And then there are the Mark Levin and Bill O’Reilly types who posture and pontificate as they too in their own way provide cover for the illegitimate Obama. More on the media in a following essay.

The sad reality is that Mr. Obama is a 100% certifiable fraud.  He is not who he says he is and he is undoubtedly not constitutionally qualified to be POTUS.  The hard truth is that he has usurped the presidency and created a national security crisis of unfathomable proportions.  Obama’s crimes and overt anti-American policies threaten America’s very existence and increasingly embolden our enemies and endanger the safety and welfare of all her citizens.

Lt. Cdr. Walter Fitzpatrick eloquently and accurately characterized Obama’s ascension to power in a 2009 complaint conveniently ignored by the courts and by Obama himself:

“you [Mr. Obama] have broken in and entered the White House by force of contrivance, concealment, conceit, dissembling, and deceit. Posing as an imposter president and commander in chief, you have stripped civilian command and control over the military establishment. Known military criminal actors – command racketeers – are now free in the exercise of military government intent upon destruction of America’s constitutional government.”

Fitzpatrick continued: We come now to this reckoning. I accuse you [Obama] and your military-political criminal assistants of TREASON. I name you and your military criminal associates as traitors. Your criminal ascension manifests a clear and present danger. You fundamentally changed our form of government. The Constitution no longer works.

But what is even more dismaying is the fact that everyone in Congress; every single congressperson and senator knows full well that Obama is a phony.  I know that because the concerned, law-abiding, freedom-loving American citizens have actually provided irrefutable evidence of Obama identity fraud and his violations of the law to their so-called representatives time and time again; via letters, faxes and town-hall confrontations. Yes, every member of Congress has been put on notice by their constituents and yet these so-called “servants of the people” have done nothing! They refuse to address the issue.

They refuse to uphold their sworn duty to uphold the Constitution.  In fact they have tried to deflect or marginalize the issue with disinformation and outright lies; some have literally hid and run from constituents and many have actually scoffed and insulted citizens when confronted face to face with the people they are supposed to be working for.  The audacity of these politicians is breathtaking. These incidents are frequent and well documented. These politicians are a disgrace and they are not fit to serve the American people.

Now for those who do not know the Obama fraud issue thoroughly and sadly there are many millions who do not (thanks to the lapdog media), let’s apply some common sense, some intellectual honesty and some hard facts as we lay out the truth.  Please note that everything stated here can be substantiated by you, the reader.  If you should have any doubts, I implore you to fact check and research yourself.  The information is out there; do not take my word.  Trust but verify.

The indisputable, irrefutable fact is that the putative president of the United States, the man known as Barack Hussein Obama, is a FRAUD.  He is not who he says is and his agenda is patently un-American, anti-American, anti-Christian, anti-life, divisive, dishonest and intended to do destroy the founding principles that are the underpinning of a free and prosperous society.  If you disagree, then you have not been paying attention.  It’s going on every day, right in front of your very nose.

For those who actually have paid attention it is both obvious and horrifying.  In the meantime, the Congress and the media ignore it as our country is being systematically destroyed.

Simply put, there is a trinity of obvious identity crimes that provide the basic foundation and clearest understanding of Barack Hussein Obama’s serial identity fraud and phony life narrative:

1. Obama’s birth “certificates” both short form and the long form released by Obama on April 27, 2011 and currently posted on whitehouse.gov are obvious and easily provable forgeries;

2. Obama’s purported selective service registration card  (a requirement for Obama’s employment
in the federal government) is an obvious and easily provable forgery, manufactured in 2008;

3. Obama’s SSN used on his recent tax returns does not belong to him. It was issued to a man born in 1890. Furthermore, there are dozens of other SSN numbers associated with his name.

STOP right there.  Doesn’t this give you pause to wonder why the POTUS has completely bogus identity documents? AKA Obama has a forged birth certificate and forged selective service registration card AND is using the SSN of someone else?  This is criminal.  The “common citizen” would be prosecuted and punished.   Is it not reasonable and fair for people to ask why? How can this be?  Is an investigation not warranted?  Of course it is. It’s common sense. The Obots, however, are only blinded by skin color and ideology.  Common sense and facts are something they cannot and will not address.

I’ll say it again. Obama has phony identity papers.  Plain, pure and simple.  If you’re honest with yourself, discerning and open-minded you will come to the same conclusion.  If you do not wish to stipulate to the truth of these contentions, I would urge you to get off your duff and do the research yourself.  Prove the Birthers wrong.  However, I warn you you will be wasting your time. It cannot be done.

And it is for that very simple reason that this issue continues to fester and will not go away. Americans who care about the Constitution, the rule of law, fair elections, freedom and liberty, have seen the facts, know the truth and will not cower and slink away and watch America be destroyed by this illegitimate Communist cabal. Because common sense and facts dictate it, more and more people are learning the truth about the contemptible fraud in the White House and his evil anti-American policies.

As Samuel Adams said: It does not take a majority to prevail…but rather an irate, tireless minority, keen on setting brushfires of freedom in the minds of men.

Freedom-loving Americans who recognize what is at stake, who understand the truth and recognize that our government is one built now on lies and corruption, have lit the brushfire.  Those flames of truth and freedom are now spreading rapidly.  It is time to join the fight and continue to fan those flames.  We cannot afford to allow Obama tyranny to quench the fires of freedom.  The future of your children and grandchildren and in fact America’s very survival is at stake.

An Open Letter to All Americans: Wake Up! pb added on Wednesday, February 26, 2014

One Response to "An Open Letter to All Americans: Wake Up! pb"