(Feb. 16, 2014) — In his Twitter feed on Sunday, Sen. Ted Cruz tweeted an image of a painting by Steve Penley commemorating Presidents’ Day on Monday and discussed on Fox News that morning.

Cruz reportedly may run for president in 2016 and currently is the junior U.S. Senator from Texas.  He was born in 1971 in Calgary, Alberta, Canada to a U.S.-citizen mother and Cuban-citizen father and automatically given Canadian citizenship along with U.S. citizenship.  After releasing his long-form birth certificate in August, discussion ensued on Fox News and at other outlets about Cruz’s eligibility for the presidency given that Article II, Section 1, clause 5 of the U.S. Constitution requires that the president and commander-in-chief be a “natural born Citizen” and not simply “a Citizen,” as is required of members of Congress.

Newsmax and other outlets reported on Saturday that Cruz is expected to be warmly welcomed later this year in New Hampshire and Iowa, which are considered “critical presidential primary states.”  Newsmax is asking readers for their “opinion” about Cruz’s potential presidential run, but there is no area in which comments can be included.

Obama and Cruz appear to share the same eligibility challenge.  While Obama reportedly “lost” his British, and then Kenyan, citizenship upon his 23rd birthday, Cruz pledged to begin the process of renouncing his Canadian citizenship last year.  On January 4, Cruz said that his “lawyers are preparing the paperwork.”

Obama claims that he was born in Hawaii to a U.S.-citizen mother and father who was a citizen of Great Britain, therefore making him a dual citizen, which has been confirmed by the U.S. State Department.

Over the last several years, both Republicans and Democrats have attempted unsuccessfully to alter the “natural born Citizen” requirement.  During the 2008 presidential election, anyone questioning Obama’s eligibility was ridiculed, silenced or threatened.

From more than two centuries ago, the Constitution is silent on whether or not a dual citizen can be considered a “natural born Citizen,” but historically, the citizenship of the parents determined that of the child, not the birthplace, as is commonly believed today.  Sen. John McCain, who also ran twice for president, was born in Panama to two U.S.-citizen parents and awarded Panamanian citizenship, which he never claimed over his U.S. citizenship.

Many scholars believe that the term “natural born Citizen” means a person born in the United States to two U.S.-citizen parents based on the findings in the 1874 U.S. Supreme Court case, Minor v. Happersett.  The Michigan Law Review states that “anyone born on American soil whose parents are citizens of the United States is a ‘natural born citizen.’ Anyone whose citizenship is acquired after birth as a result of naturalization is not a natural born citizen.”

Whether or not McCain or Obama qualifies as a “natural born Citizen” was the subject of two lawsuits filed by another presidential candidate, Cody Robert Judy, in Judy v. McCain and Judy v. Obama in 2008.

Doubts about Obama’s life story and birthplace persisted beyond 2008 and were heightened, not diminished, by the release of the long-form birth certificate image on the White House website in April 2011 which was determined to be “100% fraudulent” by a law enforcement investigation.  Stemming from that probe is a second criminal investigation which has uncovered that a member of an apparent Obama disinformation cabal is employed by DARPA, a division of the Department of Defense which engages in psychological operations and cyber-intelligence.

An incident involving more than 100 law enforcement officers from the local, county, state and federal levels in Madisonville, TN which culminated in an innocent man being sent to federal prison for four years has long been identified by The Post & Email as “going right up to the White House” as a result of discussions carried out by known members of the cabal at The Fogbow.

A second man, Walter Francis Fitzpatrick, III, who had a court hearing on April 20, 2010, the day of the massive officer deployment, has had his military pension cut by two-thirds for the past 27 months without an explanation.  Both Fitzpatrick and the imprisoned man, Darren Wesley Huff, had spoken out about local corruption in Monroe County, TN.

In March 2009, Fitzpatrick filed a complaint of treason against Barack Hussein Obama which was never answered.

In December 2010, Lt. Col. Terrence Lakin was sentenced to six months in prison, loss of pension, pay and a dishonorable discharge for failing to follow orders which he claimed might be illegal because of Obama’s unresolved constitutional eligibility question.  Lakin had first approached those in his chain of command and his congressional delegation with the question of Obama’s constitutional eligibility to no avail.

Almost two years after the Cold Case Posse announced its findings of forgery, Congress has failed to launch an investigation or empanel a special grand jury to examine the evidence compiled by the posse and other analysts.

An email received by The Post & Email in November stated that the punishments of Lakin, Huff, and Fitzpatrick were effected by design and threatened this writer with the specter of jail time for continuing to report on the Obama eligibility/identity issue.  The names of investigators who have carried out the two respective criminal investigations, Mike Zullo and Maricopa County, AZ Sheriff Joe Arpaio, were also invoked.

The Post & Email responded to Cruz’s tweet that with a foreign-citizen father, Obama does not qualify under the U.S. Constitution as a “natural born Citizen” and therefore should not appear in Penley’s painting.

Another Twitter follower commented to Cruz, “He [the painter] should have replaced Obama with Jefferson.” 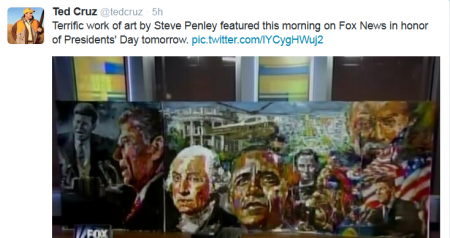 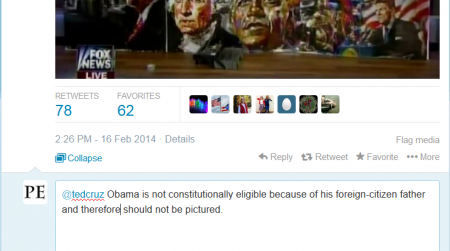 Later in his Twitter feed, Cruz issued a tweet which decried Obama’s “disregard for law.”  Cruz is known as a constitutional conservative who is often vocally opposed to the Republican “establishment” members of Congress.

Cruz’s father has been presented with a “Sheriff’s Kit” produced with information from Zullo on the Obama birth certificate forgery (scroll down).

Last month, The Post & Email contacted Cruz’s press representative to ask about his view of the “natural born Citizen” clause and other matters but never received a response.  Our queries arose after a reader asked if The Post & Email could repost an open letter written to Cruz by Barbara Ketay of the North American Law Center (NALC), whose permission we received at that time.

We now reproduce the letter, as it now seems appropriate:

RE: Your date with Honor

Seldom do we have an appointment with destiny wherein our actions will make history as being either righteous or self-serving.

Seldom, if ever, are we presented with an opportunity to protect and preserve the course of freedom and liberty in our beloved America, by simply doing what we know is righteous, rather than self-serving.

Seldom does one have the national platform to act as God ordains Christians to act…do the right and honorable thing, and leave the consequences to Him.

Senator, you stand on the precipice of true greatness. The above opportunities are yours for the taking.

The God who we worship, has placed you in a truly unique position, and is saying to you,

Senator Cruz, you have been placed in the position to end the greatest fraud ever perpetrated on the United States of America, and to stop the systematic destruction of our Country. The action required is simple – but not easy, for it requires a selfless act of love and concern for others, and calls upon you to do the right thing. Yes, some will call it a true act of heroism.

Senator Ted Cruz, as a true Christian, you must say to the nation and the world…

“It has been the delight and honor of my life that so many Americans have found me worthy of their respect and admiration, and have wanted me to run for president or vice president. But the truth is, I am not eligible for either office according to the United States Constitution Article II, Section I, Clause V wherein only a Natural Born Citizen of the United States, born of an American Citizen Father, can seek or hold these offices. I know that the Founders, in their brilliance, set this standard based on the Biblical principles of Natural Law, wherein the name, citizenship and birthright of a child was always passed by the blood of the father. Knowing this beyond question, a proud son of my Cuban father, I am not now, nor can I ever be, a Natural Born Citizen of the United States. Therefore, based upon unquestionable and prima facie evidence, I state for the record that Barack Hussein Obama, the son of a Kenyan Citizen father, is not now, nor has he ever been, nor will he ever be a Natural Born Citizen of the United States. I call for the immediate resignation of Barack Hussein Obama and the legitimate investigation into all who are involved in the greatest fraud ever perpetrated on the United States and the world, as well as all who have engaged in the greatest political cover-up in the history of politics.”

The gauntlet has been thrown down. Will you, Senator Cruz, pick it up and run with it? What will the annals of history record? More importantly, what will the record of heaven show?

In this wonderful and blessed season of Christmas we are reminded about giving…God gave the gift of His son Jesus; Mary gave the gift of her reputation in order to be obedient; Joseph gave the gift of love to Mary in obedience; the Wise Men brought gifts to honor and worship the new King. In the spirit of Christmas Senator, you alone have the opportunity and the calling from God to give a magnificent gift to millions of Americans, and freedom seeking people all over the world…the gift of returning this Country to what God intended it to be.

We call upon you Senator, to answer what we believe to be a divine calling, to stand like a rock upon the Word of God and the precepts of our Founding Fathers, to call out the evil in our land; to give of yourself for a cause much greater, the cause of freedom, liberty, truth and justice; to stand before God and all of mankind and proclaim the truth; to keep your sacred oath to protect and defend the Constitution of these United States and protect the American people from all enemies, foreign and domestic; to be the light that your father believes you are ordained by God to be…

If you do this Senator, I assure you that millions of Americans will stand with you, protect you, honor you and forever hold you in high regard as a man of great faith, great honor, and unparalleled courage and decency.

I pray for your courage and honor Senator, and await your response. I remain, in His Service…

Respectfully, on behalf of The North American Law Center,