THE POINT OF NO RETURN? 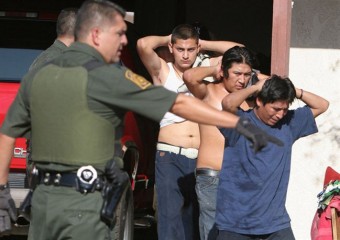 (Feb. 14, 2014) — If Americans allow the federal government to legalize illegal immigration again, they will lose their country forever.

So, the issue of immigration has nothing to do with “racist” views towards immigrants, in the most diverse nation on earth. However, when asked about “illegal” immigrants, Americans who grew up respecting the Rule of Law have a very different view, one also having no connection to issues of race.

The 1986 Act gave a “one-time” amnesty to over one million illegal immigrants. Twenty-eight years later, Congress is trying to grant 20-30 million more illegal immigrants amnesty under the guise of Comprehensive Immigration Reform that passed back in 1986.

Still, organizations like the Chamber of Commerce insist that we “need cheap labor” and therefore, we need to legalize illegal immigration no matter how many American citizens stand opposed.

Imagine what happens once our government grants voting rights to 20-30 million illegal aliens, whose legal family members consistently vote 71% democrat in every election? The communist left won’t even need to steal elections anymore, and pro-constitution Americans will be forever outnumbered by global leftist immigrants.

At the moment, Senate Democrats and House Republicans are in a race to see who can pass some form of amnesty first, a battle for the votes of illegal invaders at time when 90% of American voters don’t trust anyone in Washington, DC.

No one in the Senate is going to stop amnesty in the Senate, which means that the people opposed to amnesty must focus all energies on the House of Representatives.

Before the American people can even hope to regain control of the runaway federal government, they will first have to stop amnesty in any form, dead in its tracks.

To do this, they MUST demand the Rule of Law from their House of Representatives. If the American people fail to stop amnesty, they will not be able to stop anything else that the global left is ramming down their throats.

FORCE THE HOUSE TO STOP AMNESTY IN ANY FORM. We cannot allow our government to reward illegal invaders with our Rights. It’s also time to either stop the Chamber from pushing amnesty, or put the Chamber out of business.

CALL THE CHAMBER TODAY and tell them to step away from amnesty immediately, or face the consequences of their actions. This issue has nothing to do with race, and everything to do with national sovereignty, security, and the Rule of Law.

Americans Must Stop Amnesty in Any Form added on Friday, February 14, 2014