A Play in Two Acts: The Scimitar

WHAT IS THE PRICE FOR SENSELESS MURDER? 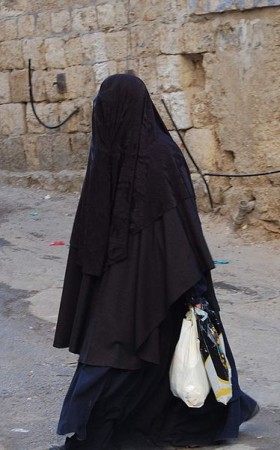 The stage is decorated as if it’s an out-of-control warehouse. The backdrop is tall shelves with all sizes of boxes, some whose contents are spilling out. The floor is covered in trash: rags, buckets and newspapers. Center of stage is a card table with a couple of folding chairs, and one chair is occupied by an old man dressed in overalls wearing a long white beard.

“What is this place? I don’t want to be here,” speaks the man.

“But you are here. Welcome to the Pearly Gates. Let me introduce myself. I’m St. Peter and I’ll be deciding your next destination. Please, have a seat and we’ll start the interview. You women, there’s a lady’s room behind those boxes in the corner. Why don’t you freshen up and then join us?”

“But this is all wrong. A terrible mistake has been made. I don’t belong here,” whines the young man.

“There, there. Calm yourself. Everything will be made clear. This won’t take very long,” says the old man as he gets up from the table, goes to a shelf and returns with a handful of papers.

A large screen drops down in front of the shelves in the rear as the women return. We can now tell the age of the women (3-70) because they’re dressed appropriately for their age in Western garb. Stage hands, dressed in white robes and angels’ wings, place chairs in front of the screen and the women sit, facing the audience. Exit angels (more elaborate productions have the angels exit by way of pulleys, lifting them up out of sight).

“What are they doing here?” the man asks.

“There, now. Please calm yourself. All will become clear,” assures St. Peter.

“Now, have you ever seen the television show ‘This is Your Life?’ Well, this is like that. See that little girl seated at the end? That’s your daughter, the daughter who you ‘honor’-killed because she cried while you were at the market. The two girls next to her, the twins, you ‘honor’-killed because you caught them playing with lipstick when they were ten years old. And then there’s your sister who you beheaded because she liked a Christian boy.  You ‘honor’-killed all of them for various made-up reasons. Anyway, I want to show you a short 16-minute movie.”

The movie “FITNA” is shown.

“Just curious,” asks St. Pete as the movie ends, “Do you have anything to say for yourself?”

“I ain’t sayin’ noth’n! I want a lawyer!” yells the young man as he jumps off the stage and runs up the aisle, by the audience, and out the door.

Stage is now set as a five-star French restaurant. The Eiffel Tower can be seen through the windows in the rear. The tables have white tablecloths and fine shiny crystal and silverware. The place is full. The men dressed in black tuxedos, the women in expensive gowns. Waiters, sommeliers, and stewards are moving silently from table to table on roller skates. A chamber orchestra is softly playing Beethoven’s “Ode to Joy!” Our seven murdered women are sitting at the center table, dressed as they were previously, except for sparkling tiaras. Enter from stage right is the young man escorted by St. Peter.

“What you see is the seven women you ‘honor’-killed. As you can see, they are enjoying themselves, their minds at ease. You never got with the program, what life is all about: helping others, and for this you will pay, and pay dearly. There is no recourse; no appeal; no chance for you: you had your time, and your selfish behavior is over, for good, I’m glad to say.”

A waiter carrying a silver platter approaches the young man and St. Peter. On the platter is a large scimitar which St. Pete hands to the man.

“This is a symbol of your wasted life. You spent your precious moments of life in envy and hate. You murdered innocent wonderful people. So, take this sword and exit where you will enter the Gates of Hell and have your head cut off every day for eternity by this very sword. Have a nice day,” so sentences St. Peter.

The young man exits stage left and, as he walks past the table of the women that he murdered, they laugh at him.

Curtain drops amid sounds of laughter and good cheer from everyone on stage.