“A SELLOUT TO TYRANNY” 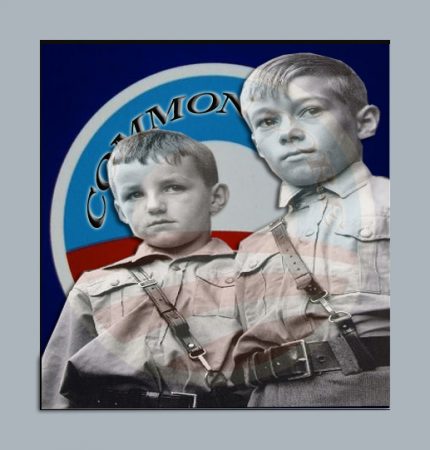 (Dec. 5, 2013) — The other night I watched a PBS special on Kristallnacht (Night of Broken Glass), a series of coordinated attacks against Jews throughout Nazi Germany and parts of Austria on November 9-10, 1938.  These were carried out by Hitler’s forces and non-Jewish civilians and resulted in the death of hundreds of Jews who were incarcerated and sent to concentration camps.  A vast number of Jewish homes, hospitals and schools were destroyed and more than 7,000 Jewish businesses were devastated. Over 1,000 synagogues were burned to the ground.  I was able to find a transcript to further review the two infamous Nuremberg Laws that Hitler initiated during his rise to power. From those, more than 2,000 antisemitic laws were ratified at all levels of government, thereby sealing the fate of the Jews of the Third Reich.

To my utter horror, however, I realized that these laws survived the Nazi regime and are now being implemented against Jews and Christians here and throughout the world.  In the U.S., our students are coming under state control through the Common Core “standards” adopted in the 45 states that succumbed to multimillions in government Race-to-the-Top dollars. When challenged by parents, teachers and administrators who are clearly trained in the community-organizer mode are refuting, bullying, and intimidating these critics. I’ve selected a handful of the 2,000 laws to cite and compare.

April 1, 1933: A week after Hitler came to power, he ordered all Jewish shops, banks, offices and department stores closed. Nazi Propaganda Minister Joseph Goebbels defended this draconian move as a legitimate response to the anti-German “atrocity propaganda” being spread by “international Jewry.” Signs were posted – “Germans, defend yourselves, buy only at German shops!” The Arab League, founded in 1944, began boycotting Jewish goods, and later rejected all who conducted business with the state of Israel.

Today we have BDS – boycott-divestment-sanctions – which are advocated by Muslim students on college and university campuses, and supported by school staff and professors.  Rallies are held with Islamist videos and guest speakers who target companies that conduct business with Israel. The groups submit Israel boycott resolutions to The National Council of the American Studies Association, in journals and academic associations worldwide.  The director of the Center for Peace and Conflict Studies at the University of Sydney is being sued in the Federal Court of Australia because he refused to sponsor a fellowship application from an Israeli academic. France’s Left Party announced its support for BDS.  Britain’s plans to issue Islamic Bonds would de facto discriminate against Israel. Ireland’s BDS activists affix yellow boycott stickers on Israeli products in stores. The Methodist Church of Britain consistently targets Israel with criticism while ignoring the sins of her foes.

The methods are different; the results are virtually identical.

Obama uses the same tactics (also described as Chicago-style brass knuckles) to marginalize and demonize his adversaries, such as with the Republican party, Wall Street executives, Fox News, news commentator Rush Limbaugh, and others perceived as obstacles to his radical agenda.

May, 1933:  One hundred years after German poet Heinrich Heine said, “Where one burns books, one will soon burn people,” members of the right-wing student organization of Wilhelm-Humboldt University in Berlin tossed tens of thousands of books from their library and other sources into a roaring bonfire at the adjacent Franz Joseph Platz. Denouncing the authors, mostly Jewish – such as Albert Einstein, but also Thomas Mann, Jack London, Ernest Hemingway and others – they purged their country of ideas, philosophies, and advancement.

Today, Ireland censors books opposed to Catholic dogma, terrorism and pornography, and in April, 2013, Ireland’s Teacher’s Union relinquished its freedoms of thought, research and growth to collaborate with Islam in banning Israel’s books and choosing to be instructed and indoctrinated by the most violent culture on earth, who are as barbaric today as they were 14 centuries ago.  At the same time, Scotland’s Clackmannanshire Council announced they would rebuff all economic support for Israel.

Throughout America, a select group of left-leaning executives, with not one academic among them, created the Common Core Standards to completely replace all previous textbooks from which our students learned and subsequently formed our exceptional nation, with its advancements in technology, science, medicine, space travel and more. Historical facts have been purged, along with the best in literature. The new lessons destroy individuality and disregard the developmental stages, the children’s maturity, and ethics.  Just as the Fuhrer offered no flexibility and tutored all students to become soldiers for the Reich, these textbooks present a fallacious, whitewashed and glorified Islam while systematically diminishing and distorting Christianity and Judaism. In addition, there are key omissions and false premises about America, her founding and her values.

The methods differ; the results are the same.
Education, because of its impact on future generations,
is among the first institutions targeted by despots.

The 1935 Nuremberg Laws and the 1933 Law for the Prevention of Hereditarily Diseased Offspring were introduced to distinguish Aryans from the untermenschen (subhumans), targeting people for eugenics and to initiate a euthanasia program.  The Nazis implemented a vast racial caste system, where teachers measured their students’ skulls and noses and recorded hair and eye color for classification into the Volksliste, choosing Nordic traits over the “racially impure,” which often humiliated the Jewish and Romani students. Days after the Kristallnacht, Goering decreed to remove Jews from German economic life, thereby destroying 30,000 Jewish-owned businesses.

In addition to registration for Obamacare, Common Core Standards will feature a data-mining system to track test scores, academic progress; information on religion, political beliefs and affiliations, family income, discipline, sexual behavior and attitudes, extracurricular activities, DNA, blood type, psychological evaluations and more, to evaluate the students and entrap them into pre-determined schools and jobs. The private database, inBloom, violates our Fourth Amendment rights and conflicts with students’ rights to pursue happiness. Paralleling the Nazi laws, students will be prevented from choosing and entering specific careers and trades.

Also under consideration is the use of Galvanic Skin Response bracelets to evaluate skin response to emotional stimuli.  Bill Gates admitted the data would enable him to design standards and software to create their steadfast market and train future employees under a socialist system. This is the modern-day social engineering to seek their version of “racial purity.”

May 21, 1935: Jews were banned from serving as Wehrmacht officers.

Since 2009, the current administration has been weakening our military and reducing our power by dismissing highly decorated military officials, Jewish and Christian, most ranked Colonel or above, in the five branches of US armed forces. The allegations vary, with some notably frivolous, but the effect is the same. Former White House Chief-of-Staff Rahm Emanuel explained this as a way of dismissing those who disagree with this government’s ideology.

College and university administrations across America are currently subjecting Jewish students to antisemitic harassment, as their departments sponsor, fund and legitimize BDS events with films and speakers who advocate Israel’s economic destruction. Islamists, aided by left-leaning professors, are threatening Jewish students in schools, making life, at the least, distressing, and their pleas for help fall on deaf ears.

Parents of K-12 students across America are choosing homeschooling in record numbers, as they see the decline of public schools. But the current administration is taking aggressive steps to  stop homeschooling in the United States.

Christian students throughout the Islamic Middle East and Africa have been attacked and killed in their dormitories in the name of Islam.  The result is the same as in Berlin, now with Jewish and Christian students experiencing exclusion and danger. Palestinians have intentionally fired rockets at Jewish schools and school buses; Islamic separatists targeted the Beslan school in the North Caucasus region of the Russian Federation on September 1, 2004, capturing 1100 hostages, including 777 children, and killing 380.

July, 1938: Jews are prohibited from owning gun stores or trading weapons, enacted within days before Kristallnacht (again proving the event was planned).  In 1922, Hitler said, “An evil exists that threatens every man, woman, and child of this great nation. We must take steps to ensure our domestic security and protect our homeland.”

The Weimar Republic had already legislated gun registration to disarm Nazis and Communists. Hitler reinforced the existing German law, banning Jews from obtaining a license to manufacture firearms or ammunition and then prohibiting Jews from possessing dangerous weapons, including firearms.

After the shooting and mass murder of schoolchildren and teachers in Sandy Hook, CT, in December of 2012, Obama and his minions began demonizing guns and ammunition, and championed eliminating all guns. Yet the US Federal government and Department of Homeland Security (DHS, named for Hitler’s Office of Fatherland Security) purchased 1.6 billion rounds of ammunition for domestic use. The DHS has national, not foreign, authority, yet purchased 450 million rounds of hollow point bullets that are even banned for military use by the Geneva Convention, enough for a seven-year war with Americans, DHS also purchased $400,000 worth of radiation-protection pills, and thousands of bulletproof roadside checkpoint booths.  Might we count on the cooperation of the Occupiers (Wall Street, etc.), the Knockout gangs, and steadfast Obamaphiles to form a domestic army? After all, was it not Barack Obama who said on the campaign trail: “We cannot continue to rely on our military in order to achieve the national security objectives we’ve set. We’ve got to have a civilian national security force that’s just as powerful, just as strong, just as well-funded”?

Senator Dianne Feinstein (D), gun opponent and senior senator from California, introduced the Assault Weapons ban of 2013, to stop the sale, transfer, importation and manufacture of military-style and high-capacity weapons. She is supported by citizens who willingly relinquish their freedom to protect themselves. Her requirements, posted on her website, include many rules from the Nazi-era control requirements concerning sale, transfer, importation, manufacture, registration with photo and fingerprints, and specific features of rifles and handgun, including type and serial number.  The purpose is to weaken political opponents and the masses.

At this writing, I received information that matches Hitler’s Schutzstaffel, his Protection Squadron or defense corps, aka the SS, of which the Waffen-SS was the armed wing.  The latest news is that Louis Gohmert, Republican Representative from Texas, exposed Obamacare’s Secret Security Force.

July 11, 1938:The Reich Ministry of the Interior banned Jews from health spas.

The YMCA of St. Paul, in a timely report, explains that the Minnesota police force supports the creation of a one-hour “Muslim girls only” swim time. This reinforces their disconnectedness and non-assimilation in America. Muslims have always had the right to use the facility alongside Americans of all races and religions, but now the Sharia-compliant authorities have agreed to reserve an hour during which Jews and Christians will be forbidden from this health spa.

The Constitution of the United States is under attack by forces that wish to usurp our soul.  There is no excuse, and we must not allow it to happen. America is a step behind Europe in its current efforts to sell out. The details are different than in WWII, but the similarity is chilling – it was a sell-out to tyranny! Had Europe heeded the signs and acknowledged Hitler’s plan, rather than acquiesced to Hitler’s earlier demands, they might have averted the epic catastrophe of World War II. Now is the time to take back our country and to resist both Islamic and Communist tyranny.

And if not now, when?

One Response to "Nuremberg Revisited"