(Nov. 1, 2013) — The Post & Email has received what could be the last letter from George Raudenbush before his impending release from a Tennessee state prison.

Raudenbush has spent the last two years incarcerated after he was convicted of eight driving violations without any proof and having been denied a defense attorney.  Sentenced to seven years in prison, Raudenbush obtained representation by Atty. Richard Hughes to mount his appeal of the convictions.  He has been assisting other male prisoners in preparing to take the G.E.D. exam and to ultimately achieve “success” upon their release.

Along with Walter Francis Fitzpatrick, III and Darren Huff, who focused attention on the illicit grand juries and court procedures carried out daily in Monroe County, TN and the greater Tenth Judicial District, Raudenbush was labeled a “sovereign citizen” in a training program presented to members of local and state law enforcement.

Raudenbush believes that Monroe County Sheriff’s Department deputies attempted to kill him in May 2006 when he was lured outside of the mission house where he was sleeping in alleged retaliation after Raudenbush accused a man of breaking a contract with Appalachian Youth Missions, with which Raudenbush served as a counselor at the time.  Raudenbush believes that the man hired others to carry out the brutal attack which almost killed him.

Other residents of the Tenth Judicial District have related Gestapo-like police brutality which is virtually never prosecuted.

While incarcerated in the Monroe County jail, Fitzpatrick learned that another man, former Elections Official Jim Miller, was most likely killed in a “government hit” involving the Monroe County Sheriff’s Department for which a woman who could not have committed the crime alone was sentenced to 22 years in state prison last fall.

Despite Fitzpatrick’s having contacted the Tennessee Attorney General‘s office, Tennessee Bureau of Investigation (TBI), FBI, and numerous state legislators with actionable information as to Miller’s assailants, no one appears to have investigated who actually killed Jim Miller and what part prosecutors have played in allowing the perpetrators to remain at large.

An investigation reportedly conducted by the attorney general, TBI and state comptroller’s office into alleged corruption in the District Attorney General’s office resulted in no criminal prosecutions.  However, both chambers of the Tennessee legislature decided to pursue allegations made against District Attorney General R. Steven Bebb, who Fitzpatrick has identified as “a criminal.”

On October 5, The Post & Email published a letter from Raudenbush which stated that Tennessee Attorney General Robert E. Cooper, Jr. had determined that Raudenbush’s convictions were a result of constitutional violations on the part of  Judge Carroll Lee Ross, who had presided over the 15-hour trial and in August announced his decision to retire in August 2014.

The most recent letter from Raudenbush reads as follows: 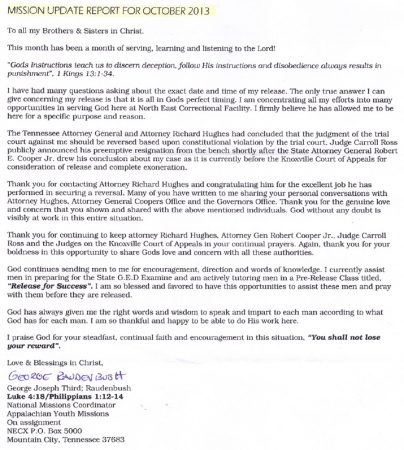 Is There a Sea Change Occurring in Tennessee? added on Friday, November 1, 2013