“HOW IMPERIAL OF HIM!”

(Oct. 4, 2013) — On Twitter, Mark Knoller of CBS News has reported that Obama has rejected any and all stand-alone appropriations bills from the U.S. House of Representatives which would fund parts of the government following the fourth day of a lack of appropriations by Congress.

The shutdown began at midnight on Monday when the House and Senate failed to reach an agreement on funding for the first part of the new fiscal year, which always begins on October 1.

The House had initially provided no funding for Obamacare, Obama’s health care bill, but funded all other aspects of government fully.  The Senate removed the Obamacare provision and asked the House to agree to fund it, which it refused to do, instead proposing a one-year delay in the implementation of Obamacare.  The Senate refused to consider that proposal, and the shutdown commenced.

The Obama regime subsequently shuttered memorials and veterans’ cemeteries which have never been ordered to close during previous government shutdowns.

Since Tuesday, the House has submitted several individual appropriations bills to the Senate to reopen the National Parks Service and Veterans’ Administration so that claims might be processed, but Majority Leader Harry Reid and Obama have refused to consider them.

Constitutionally, Obama’s role is only to sign or veto bills which Congress has passed.

Rep. Steve Stockman, who has pledged to assist with an investigation into Obama’s fraudulent birth certificate as revealed by a criminal probe which began more than two years ago, contends that Obama “deliberately targeted military cemeteries & monuments.”

According to Stockman, Obama believes he is “winning” the appropriations battle by “locks up military cemeteries so veterans can’t visit before they die.”  A National Parks employee told The Washington Times that he had been instructed to “make life as difficult for people as we can.”

While Obama sycophants ridiculed, threatened, defamed and attempted to defraud those investigating Obama’s background since 2008, it has been suggested that Stockman and others are planning on launching a formal investigation into the image posted on the White House website since April 27, 2011 purported to be a certified copy of the original from Hawaii.

Stockman has said that Obama is still able to play golf at Andrews Air Force Base despite the shutdown of many military installations.

Obama may be using a fake identity, and in addition to his long-form birth certificate, his Selective Service registration card has also been found to be a forgery.  Despite the many questions which the White House and Obama himself have refused to answer, some who are politically opposed to Obama’s policies will not allow discussion or admission of the fraud Obama has perpetrated on the nation.

In response to a twitterer who commented on one of Stockman’s tweets, The Post & Email posed the question that Obama is not actually “the president” with a link to the website of the entity which carried out the criminal investigation, the Maricopa County, AZ Cold Case Posse: 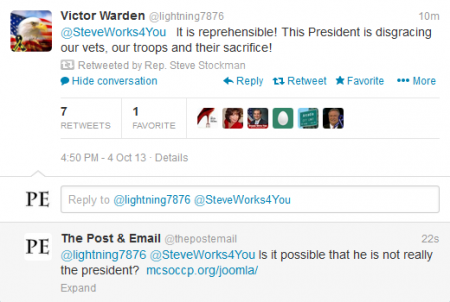 As people continue to note Obama’s un-American stance on a variety of issues, many still do not know or have not informed themselves of the posse’s work or findings.  Cold Case Posse lead investigator Michael Zullo has stated that handwritten or hand-signed letters will make an impact on whether or not Congress ultimately launches an investigation.