ARE WE READY TO RUMBLE?

by Nicolas Purpura, ©2013, blogging at TPATH 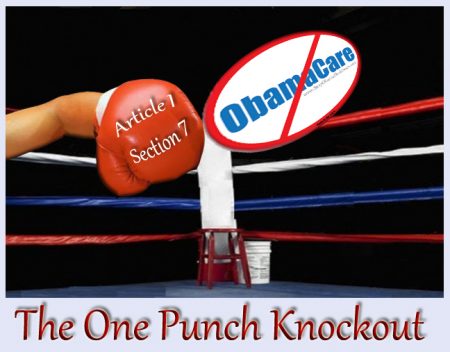 (Jul. 12, 2013) — What prompted me to write this article is the continual moaning over Obamacare. Listening to talk radio, the topic of the day was the “Death Panels.” Yes, there is a death panel that not even Congress has the authority to override in the current legislation. It’s time for a wake-up call!

What if I told you Obamacare was ruled unconstitutional, not once, but twice! Yes, twice; and not a single legal scholar, attorney or judge has had the courage to publicly or legally reveal this to the nation.

It is my intention to be deliberately insulting to get everyone’s attention and at the same time embarrass the reprobates in Congress that failed in their fiduciary duty to read the “Bill” and especially publicize the charade by the 26 Attorneys General who supposedly represented the citizens of their respective states.

Obamacare, by law, could have been legally abolished following the ruling in Florida by the Hon. Roger Vinson. In fact, it could still, even now, be eliminated in one simple legal action. Please read on and you will understand my disdain for our despicable legislators.

One would think that 26 Attorneys General who had instituted a multi-state legal action against Obamacare would be well-versed in constitutional law. If one did think that, he’d be mighty wrong. Instead of being powerful legal eagles, these 26 AG’s proved to be nothing more than useless “yellow” canaries. Not a single one of those morons realized or possibly even cared, that if followed up, the above-mentioned ruling by Judge Vinson in the Florida v. U.S. Department of Health & Human Services would have effectively ended Obamacare.

The fact is, both sides of the health care controversy requested the court address the legislative history of the bill. Justice Vinson concluded and set forth in his decision that the “bill” originated in the U.S. Senate. His Honor also stated that the bill contained taxes, thereby sealing the fate of Obamacare. By law, his ruling rendered the bill unconstitutional.

But did any of the 26 AG’s bother to present this evidence to the Supreme Court? Understanding the cost and time and effort that had been expended on this lawsuit, it is astonishing that they either overlooked or ignored that ruling. Incompetence and buffoonery really cannot address this. The only thing that does make sense is that the lawsuit they collaborated in was just a charade to display in front of their constituents. What else could describe why they would ignore truly potent ammunition when it was handed to them on a silver platter?

On appeal before the U.S. Supreme Court, that disparate group of black-robed extorted pretenders and leftist ideologues also ruled that Obamacare contained new taxes. For a second time, the door to the pathway of ending this legislation was left open. But not one AG had the courage to proceed through the threshold.

The fact is, all three levels of the Federal Court system either failed or refused to apply the clear and convincing evidence standard. That application is termed “law of the case.” Justice Vinson established the ‘law of the case” when he found that Obamacare originated in the Senate.

Where have I been going with this? Once again, our Founding Fathers, in their brilliance, wrote into the Constitution a means to halt tyranny. The U.S. Constitution is specific concerning which body of Congress has the authority to institute legislation that creates a new tax. It is unambiguous and explicit. All revenue-creating bills must originate in the House of Representatives.

Here is how it’s written:

Article 1, section 7, paragraph 1 …all revenue bills must originate in the House of Representatives. No provision exists that grants the Senate authority to originate a revenue raising bill.

Even more frustrating, the Court was informed that Congress was guilty of fraud in the passage of this legislation. With “fraudulent intent,” the House took an unrelated House Bill, HR 3590, titled the “Service Members Ownership Act of 2009,” extracted the entire contents, and replaced it with the Senate version of “Healthy Future Act” (S 1796), a precursor of the Act giving it the appearance of legality. Thereafter, behind closed doors they renamed the “Service Members Ownership Tax Act of 2009” and then re-titled it “Patient Protection and Affordable Care Act” surreptitiously to acquire a “House Designation Number.”

Two additional facts on why this was done quickly and illegally. First, the Democrats were fearful of a Republican filibuster following the election of Scott Brown (R), who replaced Senator Ted (the swimmer) Kennedy. Second, both the Senate and House were fully aware they were circumventing the law. Approximately a month prior, the Senate drafted S 510, which contained revenue-raising provisions and that bill had to be rewritten by the House of Representatives.

Following the Supreme Court ruling, not one of the 26 Attorneys General followed up or even took the time to respond to a letter prepared by www.TPATH.org (*see copy of letter below) informing them of the tax-raising violation.

Also, the Hoodlums in Black Robes in the NJ District, Third Circuit and Supreme Court of the United States refused to address the evidence that proved Obamacare was unconstitutional. So you may ask, why the heck will no one bring a legal action? This issue is still ripe for review. As they say, blackmail and corruption are a way of life in Washington, D.C.

Echelon, PRISM and the NSA just might be controlling factors.

America! A midterm election in 2014 is around the corner. Is it not time to throw every incumbent out of office and elect men and women of moral character?

I leave you with the words of Nikita Khrushchev:

“You Americans are so stupid that we can spit in your eye and you think it is falling dew.”

There are no fewer than 19 violations of the U.S. Constitution contained in Obamacare, “HR 3590,” and my previous invitation to every law professor, judge, and attorney still stands – Do you have the courage to publicly debate me? I think not, since I have put forth this challenge since 2010.

Please call your Representative and ask if what you read here is true,
and just what the heck they are going to about it!

*Copy of letter TPATH sent to the 26 AG’s just days after the Supreme Court ruling.

The Supreme Court ruling this past week which declared the bill known as Obamacare to be constitutional was as shocking as it was egregious.  If the Republicans do not get control of the Senate and or if Obama is re-elected, this country may never recover from the scope and breadth of this bill.

It will do no good to spend any time wondering why Justice Roberts ruled as he did.  Nor will it serve any endeavor to use valuable time name calling and venting.  What we need is a plan, beyond the expectations of November, and we need to implement it quickly.

I just finished watching three state AG’s on Huckabee’s Fox program (you know who you are) as they discussed possible plans for continuing the fight.  It had been my hope that Article I of the Constitution would come up and be discussed. Alas, it did not. As a result TPATH has decided to contact each of the 26 State AG’s in an effort to get some attention on the breach of Article I, Section 7.

As each of you are aware, this ruling can be challenged if it is done so with in 30 days of the ruling.  That will give you until Friday, July 27th to join together with a formal appeal and official notification.  From what I understand, an appeal can be made provided there is new evidence which was not considered or litigated during the process.

It is the opinion of TPATH as well as all of our researchers and contributors, immediately upon ruling Obamacare a tax bill, Roberts could have and probably should have, ruled it unconstitutional under the constraints of Article I, Section 7 of the Constitution.

Just a small review of the history of the Senate Healthcare bill which is the one being challenged.  This bill was written and produced by the Senate and by use of reconciliation passed it on to Obama’s desk.  So not only was this bill not produced by the the House of Representatives as required by Article I, Section 7, but it was never voted on by the full House.

The bottom line is, the Healthcare Bill was deemed unconstitutional, in its entirety, the instant that Roberts declared it a tax bill.  Taxes cannot be raised by the US Senate.

TPATH hopes you will take this into consideration. This fight to save America from this over reach of the Federal Government, is not over.

2 Responses to "One Single Petition Could End Obamacare “HR3590”"