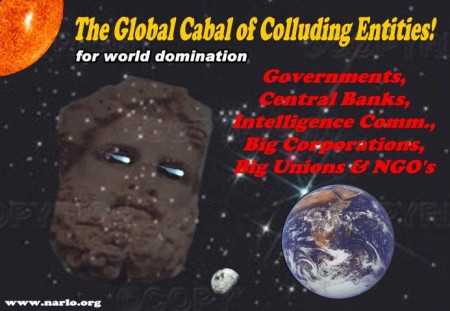 (Jun. 23, 2013) — At the risk of offending just about everyone, we’re going to lay it on the line here because we have been working up to these words for a long time.   This is not some playground spat we’re in.  We are in a war, a battle for our very lives, our freedom and American sovereignty, but most Americans simply don’t get it, or just don’t care, or worse, they like government the way it is because they are getting “free stuff.”

A while ago, in response to one of our explanations of an issue, a reader wrote: ” ….. no one can explain an issue better than you.”  Well, if that is true, then let us explain “IT” to you in terms you will understand because it is apparent that way too many Americans just don’t get “IT,” or if they do get “IT,” they have no intentions of doing anything about “IT.”  What is “IT,” you say?  We will define “IT” for you in the coming paragraphs.  In simple terms, “IT” is the government and why it does what it does or doesn’t do.  Sometimes “IT” is the law and sometimes “IT” is government breaking the law.  Sometimes “IT” is the sheer stupidity, ignorance, or greed of the people.  Unfortunately, nowhere nearly enough Americans get “IT” or are willing to do anything about “IT.”

As a testament to people not getting “IT,” at considerable personal risk, we filed a fully documented, legal Criminal Complaint with the FBI and the Justice Department, requesting them to investigate the Clinton and Obama Administrations, the Department of Justice and the Department of Agriculture on the billions of dollars in illegal payoffs to Black, Latino, Indian and women farmers who claimed racial or gender discrimination by the Department of Agriculture in doling out farm loans. Thousands of those claims were bogus and thousands more were claimed by non-farmers but were paid anyway.  We asked that some of you sign onto the Criminal Complaint to give it more impact.  Four of you had the courage to personally sign our Complaint, out of the thousands who read our article outlining the Complaint.  Just four, mind you!!!!!  As a result, WE will probably be investigated, not Clinton, not Obama, not the Justice Department and certainly not the Department of Agriculture.  Courage?  Where?  But ladies and gentlemen, without the courage of millions of Americans, we will never be victorious over “IT.”  Four people, in the grand scheme of things, have all of the impact of blowing into the East wind.  We were actively trying to right a wrong, but it begs the question; why should we leave the safety of relative obscurity and charge the enemy if no one will back us up?  That’s not just insane; it’s suicidal.  What we can only construe as retaliation for the Complaint, the IRS just levied a huge fine against us for a totally fabricated allegation.  We now have to fight that.  Will you help?  Not likely!  Yes, the IRS is still targeting conservatives.

How many of you gave a hoot when the EPA gave out over 80,000 names, addresses and personal information of American farmers to several environmental groups in response to FOIA requests?  How many of you registered a complaint when a New York State Newspaper published the names of New York’s gun carry permit holders?  The LAW allowed the environmental groups and the New York State newspaper to get this information and publish it.  Or did it?  Could something be wrong with the law, or did the government “bend” the law for political reasons?

Which of you stood up for Wayne Hage of Nevada in his 17-year battle with the Federal Government over their illegally confiscating part of his ranch at the urging of environmental groups?  Wayne won a huge settlement from the government but died four years before the settlement was paid.  It is said that his wife died well before Wayne’s passing from the stress of the fight with government.  If they can get Wayne Hage and his wife, they can “get” you.  If they can “get” conservative groups, they can “get” you.  The sad reality is that tens of thousands (if not millions) of Americans have already been “got,” but you never hear about them because they happen one at a time.

How many of you gave a damn when government took away many of our inexpensive incandescent light bulbs that gave off pleasant white light and replaced them with very expensive florescent light bulbs that give off a pale yellow light and are full of mercury that require special disposal handling?  These infernal lights take three minutes to warm up.  Government punishes the people for the fraud that is man-caused global warming by taking away our light bulbs.  Why did we let them do that?

Why do we let government remove federal and offshore lands from oil and mineral production when one of the greatest sources of America’s wealth comes from our abundant energy and natural resources?  Why are we allowing government to force coal-fired power plants to shut down, power plants that provide almost half of the nation’s electrical energy and then shipping our coal to China where they will burn it in coal-fired power plants?  Are we daft?  Are we touched in the head?  This is nuts!  Why don’t we stop them?

And where were the American people when they allowed Obama and the Demonaughts to abolish the greatest health care system on the planet and replace it with a mediocre, very expensive, one-size-fits-all, Hellcare system, euphemistically known as Obamacare?  But what is even worse, the U. S. Supreme Court, thanks to Chief Justice (turncoat) Roberts, upheld Obamacare as constitutional.  Why?  Have Americans and the Supreme Court lost their collective minds?

Last but not least, how did the U.S. House and Senate Intelligence Committees authorize the collecting and snooping of our phone, e-mail and social media records and give that extreme power to the President and the National Security Administration?  The bigger question is, how could our representatives not know that this was wrong?  How could they not know that by so doing they were violating their solemn oath to preserve, protect and defend the Constitution of the United States, so help them God?

Here is just one example of scaring the people and making them feel guilty.  The designers trumped up this notion that man is a virus on the Earth’s surface and must be dramatically controlled by severely restricting man’s behavior or reducing their numbers.  How do you restrict man’s behavior?  You tell the people that their activities are “killing” the Earth and they must refrain from those activities and it is government’s job, for the people’s own good and the Earth’s well being, to restrict that behavior.  The designers then trot out the so-called “science” of man-caused global warming purportedly caused by the emissions of greenhouse gases from man’s activities, namely CO2.  That is followed by the propaganda of “cut back,” “limit” and “restrict” and then the con game of “cap and trade” to save the Earth, along with the laws to make all these limitations happen.  By the way, the bankers really love “cap and trade.”  Lots of money flows through the banks under this scheme and it is happening as we speak.

Now people, especially Americans, don’t like their behavior being restricted because they have this crazy notion that they are free.  Americans are a different breed because of this notion, and to top it off, they own guns, lots of guns.  Those wanting to control the flow of money and the global economy are threatened by people who own guns, creating the international push to severely restrict or outright confiscate the guns of any human being and especially Americans.  Thus, the United Nations Small Arms Treaty was born.  Who were the designers of the UN Small Arms Treaty?  Guess!  As we mentioned earlier in this article, 44 Democrats and two Independent Senators voted to ratify the UN Small Arms Treaty.

But here is what most Americans don’t get.  The forces trying to control and restrict us and remove our liberties are not only very powerful, they are international in scope.  This Global Cabal of Colluding Entities includes central banks, governments, intelligence communities, large industrial complexes, big corporations, powerful non-governmental organizations (NGO’s) and big labor.  Those forces, in spite of our alleged Constitutional protections, can spy on you, lock you up indefinitely without charging you with a crime, fine you into bankruptcy, take away your property and your money, or literally make you disappear, especially if you threaten their efforts to control the flow of money and the global economy.

Americans have the power, and they are the only people on the planet who have the power to destroy the ambitions of this Global Cabal of Colluding Entities, but only if they operate by the millions in unity on single issue after single issue.  If 10 million Americans got together and applied the power of the masses on one single issue to those who represent us, they could change the direction of America, one issue at a time and almost immediately.  Anything less than this will not overcome the immense power of the Global Cabal of Colluding Entities.  If Americans continue to let themselves be brainwashed and indoctrinated by government and those colluding entities that control government, they will lose the capacity to overcome the almost unlimited power of the cabal.  Until millions of Americans get “IT,” they will be forever at the mercy of those who fully intend to put us in chains.  If the cabal succeeds, American freedom and sovereignty will be but a small entry on a page in some dusty old history book.  It may already be too late.

Nothing in what we have said here takes into account the very serious threat from the meteoric rise in the worldwide Muslim population and the high potential of the implementation of Sharia law in all of our institutions in every Western country.  We will leave that issue for a later discussion.

But, ladies and gentlemen, these are just words.  Only actions by millions of united Americans will save America and possibly the entire world. Words alone won’t do it.

Ron Ewart, a nationally known author and speaker on freedom and property issues and author of his weekly column, “In Defense of Rural America,” is the President of the National Association of Rural Landowners, (NARLO) (http://www.narlo.org) a non-profit corporation headquartered in Washington State and dedicated to restoring, maintaining and defending property rights for urban and rural landowners.  Mr. Ewart can be reached for comment at ron@www.narlo.org 1-800 682-7848.

The Threat of The Global Cabal of Colluding Entities added on Sunday, June 23, 2013