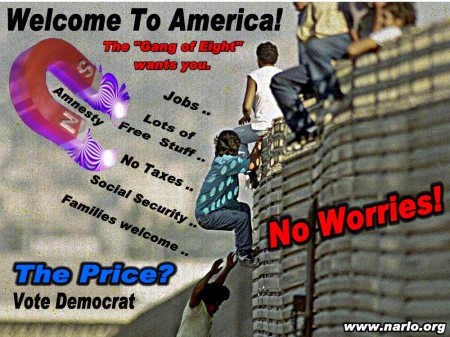 (Jun. 9, 2013) — “But if our hopes are betrayed, if we are forced to resist the invasion of our soil and to defend our threatened homes, this duty, however hard it may be, will find us armed and resolved upon the greatest sacrifices.” — King Albert II

Many of us have been waiting for years for a single issue to awaken Americans from their sloth-like slumber.  Creeping socialism hasn’t done it.  Even radical environmentalism hasn’t seemed to catalyze much anger against government, and way too many fail to see its hidden dangers.  Way too many actually support the aggressive onslaught of environmental regulation that violates our constitution.  In most cases the infiltration of socialism and radical environmentalism has just barely raised a few ho-hums around the country.  Wars have raised some eyebrows, but not on a grand scale.  Maybe the IRS scandal, or even the NSA monitoring our telephones might do it, but if it wasn’t for Fox News and some conservative talk show hosts, these issues aren’t being covered.

Perhaps there is one issue that has all the characteristics of getting Americans to rise up en masse in opposition to the gross negligence and malfeasance of their government.  That issue is illegal immigration and amnesty for lawbreakers.  The problem is, one party in government has not only allowed illegal immigration by ignoring existing laws, but actually encouraged illegal immigration by specific actions or inactions for the sole purpose of entrenching power by buying votes with the promise of amnesty.   It is out there for everyone to see, open, blatant and in your face.

Do you see anyone trying to escape America?  Of course not, unless you are the tax criminal, Marc Rich, pardoned by President Clinton and represented by the current Atty. General, Eric Holder!  Even though America is vilified around the world as empirical, evil and arrogant, they are all trying to get in here, and who wouldn’t?  Who wouldn’t want to come here when not only are there jobs to be had, but generous financial support, free benefits and the promise of amnesty by the Democrats.  Those that came through Ellis Island many years ago mostly arrived with just the promise of freedom and not much else, and they were glad to get it.  That promise held with it the responsibility to take care of themselves, learn English, get a job, become self-supporting and assimilate into American culture.  But the majority of illegal aliens from Central and South America don’t come here to learn English and assimilate into American culture.  They come here for the jobs and the government benefits and the promise of amnesty.  They come here because the door is open and they can get away with it.  Breaking our laws comes with no consequences, and in fact, many in our government want to reward their lawbreaking with a path to American citizenship.

Who among you believes that any comprehensive immigration reform bill will actually close the border and bring 12 to 20 million illegals from out of the shadows?  Who among you believes that the government, which hasn’t done so in 30 years, will actually enforce laws against employers that continue to hire illegal aliens for the sole purpose of cheap labor and higher profits?  Who among you believes that those who do come out of the shadows will take the chance to go back to their homeland to get a visa to return to the United States and get in line?  They are already here, working, buying homes, getting driver’s licenses, free medical care, social security, welfare benefits and a free education for their kids, along with not having to pay income taxes ….. and the promise of amnesty from the Democrats.  Why would they come out of the shadows?  Why would they leave?  After all, as long as the door is open, they have absolutely nothing to lose or fear, and if they do get amnesty, they can bring all their relatives here and then vote for Democrats.

And why does it take over 1,000 pages (Gang of Eight Bill) for a comprehensive immigration reform bill, when Bill O’Reilly managed to get a bill down to one page?  How many special interests have their hooks and their amendments in this bill?  How many legislators look at comprehensive immigration reform as a free ticket to permanent control of power by one political party?  We either fix illegal immigration now, or you can kiss what is left of a free and sovereign America goodbye and maybe even trigger a civil war when the producers finally decide they aren’t going to pay for deadbeats, freeloaders and illegal aliens any more.

President Reagan granted amnesty to 3,000,000 illegal aliens with the promise of vigorously enforcing existing immigration law.  The result was amnesty for 3,000,000 illegal aliens but little to no enforcement of immigration law, creating just another magnet for illegal aliens to cross our borders.  Why does any sane American believe that the Gang of Eight Bill, or any other immigration reform bill, for that matter, will be enforced when the IRS targets conservatives and holds lavish conferences on the taxpayer’s dollar.  Why does anyone think that any immigration bill will do what it is intended when Obama and the Department of Homeland Security make up their own immigration law?  Why would anyone assume that the government is trustworthy when we just discovered that the National Security Agency is now monitoring 121,000,000 Verizon telephone customers in open and notorious violation of the 4th Amendment to the Constitution?

Ladies and gentlemen, the “fix” to illegal immigration is simple.  If we want them to leave or not come here in the first place, remove the magnets.  Close the borders, stop the benefits, enforce existing law and prosecute employers of illegals.  How many pages would that take?  Three?   And if you really want to close the borders, start firing near those illegals when they are crossing the border.  You don’t have to kill them to chase them back across the border.  A few of Obama’s drones would do the job.  If a stray bullet got one, it would punctuate the message … “Stay out of America unless you are invited, or go through legal channels!”  There is nothing like a .50 caliber bullet hitting the ground next to you to deter you from entering an America that doesn’t want or need you.  For those carrying drugs, tightening up the firing pattern could go a long way towards drastically reducing the drug trade.  Illegal aliens take jobs, burn up billions of American taxpayer dollars, and drugs kill Americans and get Americans killed.

What is happening on our southern border is an unprecedented foreign invasion by any definition.  Any other country but an irrationally compassionate America would repel that invasion.  But liberals need millions more votes to clinch a permanent hold on power, and keeping the “magnets” in place and granting illegal aliens amnesty should just about do the trick.

If government won’t stop this illegal invasion of our land because of its lust for power and willingness to violate the Constitution, then it is up to the people to repel the invasion by whatever means necessary.  If government won’t clean up its own messes, excesses and corruption (IRS, FBI, DOJ, DHS, DOE, EPA, etc.), it is up to the people, if they value freedom, to clean up government’s corruption, messes and excesses themselves, that is, if they are “armed and resolved upon the greatest sacrifices to repel foreign invaders and eradicate government tyranny.”  But alas, if that resolve is not manifested in the masses, the power of the government will just get greater by the day until they have reached absolute power and the people will have lost any viable means to resist. The point of no return is approaching rapidly and the snake is growing larger by the day.  Soon it will be able to crush us in its coils.

Ron Ewart, a nationally known author and speaker on freedom and property issues and author of his weekly column, “In Defense of Rural America,” is the President of the National Association of Rural Landowners, (NARLO) (http://www.narlo.org) a non-profit corporation headquartered in Washington State and dedicated to restoring, maintaining and defending property rights for urban and rural landowners.  Mr. Ewart can be reached for comment at ron@www.narlo.org 1-800 682-7848.