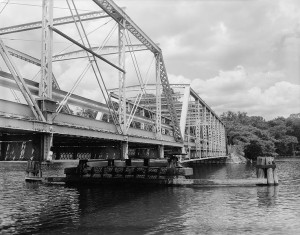 (Feb. 18, 2013) — Infrastructure is the backbone of a nation; it connects people to services, markets and jobs. It provides clean drinking water, access to foods not locally grown and allows for the electricity we take for granted in today’s hi-tech world. One of the biggest reasons America surged ahead during the industrial revolution was the massive expansion of the railroad system which shortened cross-continental travel from months to days. Eisenhower’s push to build the Interstate Highway network unleashed a manufacturing boom that has never been rivaled. But all infrastructures require resources to ensure their everyday running and maintenance. US infrastructure spending peaked in the early 1960’s at 3.1% of the GDP; by 2007 it had dropped to 2.4% and keeps falling. While China, Canada, Mexico, Australia and India are putting greater amounts of money into their infrastructure, the US is system is aging and failing in a downward spiral that has serious long term ramifications for our ability to compete in the world marketplace we once led. [16]

Spanning the Mississippi River in Minneapolis, Minnesota, the I-35W Bridge was a convenient way to get to either the Metrodome or the East Bank Campus of the University of Minnesota. The heavily used bridge was designed by the Civil Engineering firm “Sverdrup & Parcel” in 1961 and opened to traffic in 1967. [1] The bridge consisted of a single steel arched span anchored in place by two load bearing concrete pylons on either end and was designed to carry 66,000 vehicles per day. In the 1990’s the shoulders were converted into 2 additional lanes and an extra 2” of asphalt was added, [3] and by 2004, an estimated 141,000 vehicles crossed the bridge daily. [2]

The bridge was intended to last 50 years, but in less than 30 years, federal inspectors in 1990 rated the bridge as “structurally deficient,” citing significant corrosion in its bearings. In 2001, a study conducted by the University of Minnesota revealed major stress cracks in the cross girders at the end of the approach spans which lead to major overhauls and the adding of support struts to the cross girder to prevent further cracking. In 2005, the bridge was again rated as “structurally deficient” and on August 2, 2007, it was announced that the bridge was scheduled to be replaced in 2020. There was also an internal MN/DOT document in which bridge officials talked about the possibility of the bridge collapsing and worried that it might have to be condemned, [2] as one of the gusset plates supporting the bridge was found to be bowed. [3]

In July of 2007, routine maintenance and safety upgrades closed 4 lanes of the bridge to allow for the construction. On August 1, four of the eight lanes were closed for resurfacing, and there were 575,000 pounds of construction supplies and equipment on the bridge. With rush hour traffic slowed to a crawl the bridge was literally end to end traffic. At 6:05 p.m. Central Standard Time, a witness later testified they heard a thunderous clap and saw dust billowing from the bridge just seconds before they saw the central span collapse into the river below. [4] The southern section of the bridge toppled 81 feet eastward while the northern section crumbled into a rail yard crushing three unoccupied freight cars. [5]

Within minutes it was over, and as the dust settled it revealed a scene from one of the Mad Max films. Vehicles and construction workers were flung up to 115 feet away like rag dolls in a tornado. On one of the broken slabs listing at a crazy angle was a burning truck and a school bus carrying 60 children. Survivors and bystanders began to pull kids from the bus and only ten of them had to be taken to the hospital. [4]

Vehicles lay everywhere, some in the water, some clinging to the road as the slab of road they were on came to rest pointing towards the sky; others were crushed by concrete, other vehicles and road signs. Dozens of vehicles were scattered and stacked on top of each other amid the rubble. Some people were stranded on parts of the bridge that weren’t completely in the water and the cries of the injured came from all over. The final toll was 13 killed and another 145 people injured in what is to date, America’s worst bridge disaster.

The investigation following the disaster revealed three major contributing factors: 1) the primary cause was undersized gusset plates. 2) The addition of the 2 inches of concrete had increased the overall weight by 20%. 3) The extra weight of an additional 578,000 pounds of construction equipment and supplies. [4]  [6]

The investigation also raised the troubling question of why this defect was not discovered in over 40 years of inspections and even more ominously, the specter of this disaster happening again as this same design was used in the construction of 700 other bridges all over the US. Unfortunately, bridges are only one part of the massive infrastructure fabric which is slowly unraveling.

America, we have a Problem

Our power grid is massively overloaded and rapidly degenerating because it lacks basic maintenance and upgrading. It’s only a matter of time until the Northeast blackout of 2003 which darkened an estimated 10 million people in Canada and 45 million in the US is eclipsed by the ever increasing demands on our aged system. [7] Another time bomb is our levee system which catastrophically failed around New Orleans during Hurricane Katrina, allowing massive flooding. [8] In fact, the American Society of Civil Engineers has given the US an overall grade of a “D” for our decaying infrastructure and estimates it would cost over $2.2 trillion in 2009 dollars, to raise it back to acceptable standards. This capital outlay does not make a single improvement to our overwhelmed system. [9]

A sampling of the report card shows that while the grade for bridges was a “C,” one in four of the nation’s bridges is either structurally deficient or functionally obsolete. Our dams received a “D” revealing that of the approximately 85,000 US dams, some 4,000 of them are “structurally deficient,” while the average age is just over 51 years old. [9]

Four other parts of the components of our infrastructure which earned a “D –” are:

“Who goes a borrowing; goes a sorrowing.” Thomas Tusser

Every part of our system has reached the point where system failures are going to increase significantly putting more Americans at risk. But this reality comes at a time in which America is facing a $16.39 trillion deficit along with an almost $122 trillion in unfunded liabilities such as Social Security, Prescription Drug and Medicare/Medicaid liabilities. [10] Our State governments owe another $4.19 trillion and [11] since 2010, there have been thirty-one municipalities and 7 cities declaring bankruptcy. [12] Moody’s rating agency rated the debt of 30 cities, towns, villages, counties, and school districts as “speculative grade,” which is up from 25 last year. A speculative-grade rating for a local government means, at best, its’ debt is risky and, at worst, it could end in default. [13] America is swimming in debt and that debt has increased an average of $3.87 billion per day since September 28, 2007. [14] Eventually, this debt will consume an ever expanding amount of the public treasury, reducing the ability to invest the capital we need to rebuild our failing infrastructure system.

Regrettably, the time to deal with the infrastructure crisis in America without major cutbacks in governmental spending is over. There are no longer easy answers for this situation and the current crop of Uriah Heep [15] like characters infesting our government ensures nothing will get done unless they are forced to.

There are three courses of action the reader can do to meet this challenge and two of them should be done simultaneously. First, get involved in electing those who understand the need to reduce governmental overspending while prioritizing the rebuilding of American infrastructure. Second, have extra food, water, supplies and resources for yourself and/or family on hand should the worst happen. Three, do nothing and wait for the government to be there for you when the chips are down.

“Any man who thinks he can be happy and prosperous by letting the Government take care of him, better take a closer look at the American Indian.”  Attributed to Henry Ford

One Response to "A Bridge Too Far"