OBAMA:   CANDIDATES MUST BE “AN OPEN BOOK” 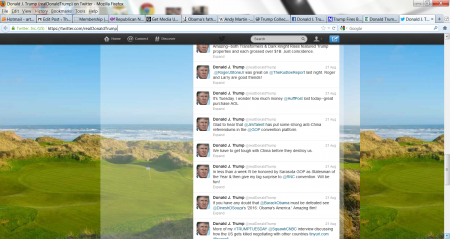 (Aug. 23, 2012) — A Politico article is reporting that the RNC has confirmed an appearance at the convention on Monday by businessman Donald Trump, who early last year questioned why Obama would not release his long-form birth certificate.  The short-form certificate which appeared on various websites in June 2008 had been declared a forgery by some analysts and was never stated by the Hawaii Department of Health to be authentic.

Trump’s name does not appear on the list of speakers for Monday, the first day of the convention, although there are entries entitled “Video,” “Various Speakers,” and “To Be Announced.”  The convention will run from August 27-August 30 in Tampa, FL.  The organizers are calling the event “the most open convention in history” because of its availability to the public through a “Facebook app.”

Tuesday’s schedule also contains several undefined segments, as does Wednesday‘s.  Speakers will include two attorneys general, Pam Bondi of Florida and Sam Olens of Georgia who were asked by their constituents to investigate Obama’s constitutional eligibility but did not so do.

Last night, Trump tweeted that information about Obama’s background which will prove surprising will be unveiled soon.  Trump’s Twitter page indicates that he “can’t wait to meet patriotic small business owners next week in Sarasota and Tampa!”  Trump will be receiving the “Statesman of the Year Award” from the Republican Party of Sarasota at a sold-out dinner there on Sunday.  On August 21, Trump tweeted that he would be giving a “big surprise” at the Republican National Convention on which he said he was working on August 14.

Trump has been in touch with Maricopa County Sheriff Joe Arpaio, whose Cold Case Posse conducted an investigation at no cost to taxpayers into the authenticity of the long-form birth certificate image which Obama released after Trump’s public urging.  The posse concluded that the image is “definitely fraudulent” and that there is “probable cause” to believe that Obama’s Selective Service registration card is also a forgery.

Selective Service Administration Director Lawrence Romo reports directly to Obama and has refused to investigate the allegation, instead referring the posse’s lead investigator, Mike Zullo, to the FBI.

When The Post & Email contacted the FBI about the posse’s findings announced at its last press conference on July 17, 2012, the media spokesperson recommended that “If you think a really serious crime has been committed, go to your congressman.”  The spokesman said he had watched the entire press conference on the 17th.

Trump also made references to Obama’s having mentioning Mitt Romney’s father last month, when the Obama campaign called upon Romney to release more of his tax returns because Romney’s father, George Romney, had done so while serving as governor of Michigan and campaigning for president.  Obama had stated that candidates for president must ensure “that the American people know who you are and what you’ve done and that you’re an open book,” although Obama has refused to release medical records; college transcripts and applications for which Trump has specifically called; passport applications, and an explanation as to why he uses a Social Security number generated from the state of Connecticut, where Obama never worked or lived.

Former White House Press Secretary Robert Gibbs, who claimed in 2009 that he had “posted” Obama’s birth certificate “on the internet,” recently called Trump a “birther in chief” and right-wing nut job.” Newsmax reports that Trump “has been promising to deliver a big “surprise” at the convention in Tampa, Fla., which begins on Aug. 27.”

Trump does not identify “Barack Obama Sr.” as Obama’s father.  There have been growing doubts as to whether or not “Barack Hussein Obama Sr.” is Obama’s biological father.  Constitutional attorneys have contended that a birth in the United States alone does not qualify a person as a “natural born Citizen” under Article II, Section 1, clause 5 of the U.S. Constitution, but rather, that the father or both parents must have been citizens at the time of the candidate’s birth.

Both Frank Marshall Davis, an avowed communist who lived in Hawaii, and Malcolm X, a convert to Islam who was assassinated in February 1965, have been named as possibly being “Obama’s” biological father.  A reportedly “impeckable source” allegedly told a blogger that the Cold Case Posse possessed evidence that Malcolm X is the father.  Blogger and former presidential candidate Andy Martin believes that Davis is the father.

Could Trump’s announcement have to do with the alleged “birth announcements” of Obama’s birth in Hawaii in 1961?

The Post & Email has contacted both Trump’s office and the RNC organization committee to confirm if and when Trump will be giving a presentation.  Since Congress has refused to act on the questions surrounding Obama’s identity and eligibility, will the RNC provide the long-awaited forum for discussion?

What Will Donald Trump Reveal at the RNC Next Week? added on Thursday, August 23, 2012

3 Responses to "What Will Donald Trump Reveal at the RNC Next Week?"