A Letter to the People of America, the Land of the Free and Brave

AND TO THE REST OF THE WORLD 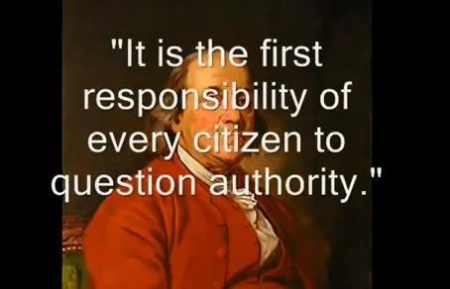 (Apr. 28, 2012) — “Insanity: doing the same thing over and over again and expecting different results.” — Albert Einstein

The source of any government’s authority is from the consent of the governed because the governed usually outnumber the authority.

This means that the government is not the ruler, but the servant or agent of the collective citizens who are being governed; it means that within an organized government, there are no rights except those delegated to it by the lawful citizens for a specific purpose. Today within the government of the united States of America, the State and Federal governments have all been “undermined’ as reported within the following excerpt from THE CONGRESSIONAL RECORD.

If you are one lonely man or woman at the back of the room and you don’t understand, you must stand up and ask the question so that you can understand or you will be a slave to the System for the rest of your life. If you don’t demand the truth, your children will be slaves to the System for the rest of their liVes. If this System is not exposed to the Masses, it will continue another 2000 years, causing wars and International Strife as it was reported within this CONGRESSIONAL RECORD Appendix – VOLUME 86 — PART 17, AUGUST 6, 1940, TO SEPTEMBER 27, 1940:

“Mr. Speaker, in order that the American people may have a clearer understanding of those who over a period of years have been undermining this Republic …”

Please note since 1940 there has been additional documented information which corrects some of the misinformation exposed in the above Congressional Record.

“When you have eliminated the impossible, whatever remains, however improbable, must be the truth.” — Sir Arthur Conan Doyle

You have to eliminate the impossible before you can saved yourself! — Steven Pattison

Are you ready to eliminate the impossible?

Within the proceedings and debates of the 90th congress in the first session reported in volume 113, part 12, dated June 12, 1967, to June 20, 1967 on pages 15309 to 16558 in the CONGRESSIONAL RECORD titled “THE 14TH AMENDMENT-EQUAL PROTECTION LAW OR TOOL OF USURPATION,” it documented the unconstitutional actions that were never questioned. These acts of Sedition need to be questioned now because what is reported within this government document is the creation of the de facto, the current government authority today.  No one has Standing to question it because we are not a party to the de facto government but only subjects of it because we are within its venue and jurisdictions.

When I first learned about this Conspiracy, I asked what happened to the Jurisdiction of the government created by our Founding Fathers. I learned that what we have today is a figment of our imagination bought and paid for by the banklords.

The term ‘de facto’ has been around for some time as defined in Bouvier’s Law Dictionary – 1856 Edition:

Remember: “If You Do Not Know Your Rights, Then You Do Not Have Any Rights!”

Before any good man or woman can question authority, he or she has to understand his or her Rights and how to use them!

All it is going to take is for the People to ask the correct questions for all of us to become FREE! Please review my earlier Postings.

The following information is about the ‘Scheme’ and ‘System’ that were created a long time ago, which is very difficult for most people to understand. It covers all the large amount of FUNNY money and ll the ‘Municipal Corporations,’ including the 50 Union states which are today all de facto.

Our plan is for all the FUNNY money created by the Federal Reserve which is all a fiction created from thin air, to be replaced with the People’s money backed by all the hard assets within our Country. The lawful state governments will be restored and the People will agree on a form of money that they will provide at cost of printing. The de facto CAFR accounts explained here and Your State CAFR Is Just Like Oregon’s. Oregon, the lawful Union state, owns the current government that was created as a de facto government which in 2008 had 500 million dollars of FUNNY money, cash on hand from a total of $4.9 billion which should be an average of the 50 Union states. You should also know that all other government entities and municipal corporations have a second set of books too.

The banklords, with the help of attorneys and accounts, have created a set of books that are all based on FUNNY money created out of thin air by the Federal Reserve which is not part of the lawful United States government. The longer this continues, the larger the numbers become, which are fiction being used to control the People.

We need your help in alerting the people!

This series of videos explains just how they are controlling all of us with their money.  Just think for yourself:  if we the People collectively agreed to print our own money, we would not have the national debt we have today. You will have to understand that the current fifty states are all de facto, and we are no longer one of the People in these de facto governments as in ‘We the People;’ therefore, we have no ‘Standing’ to question their authority.

This fact has to be exposed. The loss of the consent of the governed to question was caused by the new governments known as the ‘de facto,’ and they were all created without lawful authority and therefore are unconstitutional.

Voting in their de facto system will not change anything because they control the voting; see Hacking the Democracy video.

Only the truth will set us free.  With more people learning the truth, it will happen so that one day soon, we all will be able to say, “I thank God I’m free at last!”

“The individual is handicapped by living with the monstrous conspiracy known today as the System, all of their adult life and they will not realize that it really exists until they first listen to President John F. Kennedy’s audio posted on his Presidential Library website and then read the research about the subject.” ~ Steven Pattison

Audio from JFK library or a better Video of the same speech – 19:34 minutes or six-minute clip and his Transcript uses the terms ‘Conspiracy and System’.  JFK also said in this speech:

“The very word “secrecy” is repugnant in a free and open society; and we are as a people inherently and historically opposed to secret societies, to secret oaths and to secret proceedings.”

“And that is our obligation to inform and alert the American people to make certain that they possess all the facts that they need, and understand them as well the perils, the prospects, the purposes of our program and the choices that we face.”

“I am not asking your newspapers to support an Administration, but I am asking your help in the tremendous task of informing and alerting the American people. For I have complete confidence (applause) in the response and dedication of our citizens whenever they are fully informed.”

“There are a thousand hacking at the branches of evil to one who is striking at the root.” – Henry David Thoreau, American author (1817-1862)

WE are completing JFK’s mission of alerting the American people which he had asked ‘The American Newspaper Publishers Association’  to do, and we need your help because the root is so enormous that it will take more than just one to dig it up and get it out of our country. All we would ask anyone to do is listen to JFK and alert others with the research about the subject.

You have to know if we don’t do something soon, we will have what Thomas Jefferson said a very long time ago:

“If the American people ever allow the banks to control the issuance of their currency, first by inflation and then by deflation, the banks and corporations that will grow up around them will deprive the people of all property, until their children will wake up homeless on the continent their fathers occupied.”

We are only asking you to do what you can.

“The good men may do separately is small compared with what they may do collectively.”— Benjamin Franklin

Please do something different today! If you just forward this to one man or woman who wants to learn the truth and they email me or call, then it will be a step in the right direction for the Truth to be known by all! That is all that JFK wanted for the people:  to be informed of the truth.

A Letter to the People of America, the Land of the Free and Brave added on Saturday, April 28, 2012