THE FOUNDERS’ CHECK ON RUNAWAY GOVERNMENT NOW CONTROLLED BY GOVERNMENT

(Apr. 20, 2012) — In Monroe County, TN, a case against a retired Naval commander is scheduled to move forward on April 30 despite an admission by the court clerk that her signature appearing on arrest and search warrants is a forgery.

The Sheriff’s Department Detective, Conway Mason, then took the documents and acted upon them as if they were legally issued, arresting and jailing Walter Francis Fitzpatrick, III following his release just days before and confiscating his computer equipment.  The search and arrest warrants also contained two incorrect addresses for Fitzpatrick.

Above the double line over the words “PROBABLE CAUSE DETERMINATION,” a line designating “Judge/Clerk/Judicial Commissioner” appears, above which is the signature “MM Cook.”  The title “Clerk” is circled.  However, at Fitzpatrick’s probable cause hearing, Cook stated that she did not sign the document and would not or could not identify the person who did. 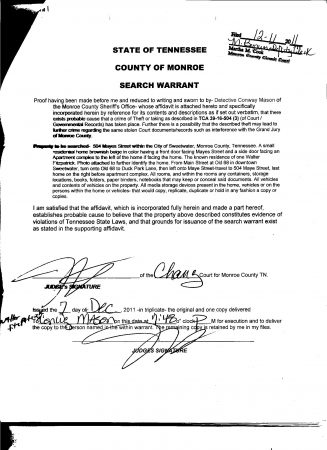 December 7, 2011 Search Warrant stating that “probable cause” exists for theft against Fitzpatrick. The judge’s signature is illegible.

The case against Fitzpatrick involves documents he picked up from a table in a courtroom for which a video allegedly exists, but Fitzpatrick knows of no one who has positively viewed the video.  The Monroe County Sheriff’s Department seized Fitzpatrick’s office equipment to seek electronic reproductions of the documents on his computer, which Fitzpatrick stated they would not find.

At a probable cause hearing on January 17, Fitzpatrick stated that no “criminal intent” was involved because the papers were left on a table with others which were available to the public.  Fitzpatrick has told The Post & Email that the documents in question show evidence of the crime of Judge Amy Reedy hand-pick the grand jury members for the 2012 session because the names, addresses, phone numbers, occupations and family information were contained on the slips of paper.

On the recording, court clerk Martha M. Cook states that “a list” was reported missing, but the papers in question were not a list.  Rather, they were 36 questionnaires containing the person information of grand jurors who were reportedly selected by the judge on December 7, 2011.  Tennessee state law mandates that juror selection be conducted by automated means.

In September 2009, Fitzpatrick originally brought evidence of a crime committed against him while in the military also involving a forged signature to the Monroe County grand jury to request that they examine it along with a treason complaint against Barack Hussein Obama, who has now been named a “criminal” by singer Ted Nugent; a “traitor” by Peter Fonda and Atty. Larry Klayman, who is leading a ballot challenge against Obama in Florida; former Vice President Dick Cheney; Townhall author “John Smith;” and various bloggers, citing Obama’s friendliness with The Muslim Brotherhood and violation of the War Powers Act.  Fitzpatrick told The Post & Email that he also brought information about a Staff Sergeant who had been undergone a court-martial and was the reason why Fitzpatrick had relocated to Tennessee in 2007 from the West Coast.

Upon approaching the grand jury foreman with the information, Fitzpatrick believed that it was a lawfully-constructed body which would provide a response to his request.  Instead, he discovered that the person in the position of foreman had been serving in that capacity for 27 consecutive years, which Fitzpatrick stated was a violation of state law.

The Tennessee Administrative Office of the Courts’ media contact person, Laura Click, had told The Post & Email that the foreman is routinely appointed by the judge serving in a particular courthouse and that there is no limit on the number of terms a foreman can serve.  However, recently, and since Fitzpatrick has raised up the question of impartiality with the grand jury foremen appointed to consecutive terms by the judges, several Tennessee county grand jury foremen have been dismissed following several such consecutive terms.  In January 2011, the Monroe County grand jury foreman was also non-renewed, although the person appointed to replace him has a defective appointing order and is now in her second year of service, having signed an indictment against Fitzpatrick in the case to be heard on April 30.

After conducting a citizen’s arrest of Gary Pettway on April 1, 2010 for over-serving his term, Fitzpatrick was accused of inciting a riot and other transgressions along with Darren Huff, who operated a video camera during the incident.  Fitzpatrick has stated that he believes that Judge Carroll L. Ross issued a handwritten note to Monroe County sheriff’s deputies, who then arrested Fitzpatrick just outside the courthouse.  Eyewitnesses had said that the people gathered outside to observe had been speaking civilly with local police officers while Fitzpatrick went into the courthouse to arrest Pettway.

On October 27, 2010, Fitzpatrick had been arrested by the Monroe County Sheriff’s Department for allegedly missing a hearing involving his attorney of record.  At that time, he sustained injuries including a torn left ear, bruised ribs, a bruised shoulder, and multiple taserings.  In November 2011, during another incarceration, Fitzpatrick was offered better “accommodations” if he agreed to stop speaking with the press about the conditions in the Monroe County jail and the corruption within the sheriff’s department, courthouse, grand jury, and judiciary as a whole.  He refused the offer.  Fitzpatrick had reported numerous threats against his life since he began exposing corruption in Monroe County.  A county elections official was brutally murdered in July 2010 which Fitzpatrick stated was done to intimidate others, including himself, from speaking publicly about what they observed.

Fitzpatrick also discovered that at least one other juror, in addition to the foreman, who participated in issuing indictments against him in June 2010 had served during a prior term within the 24-month preclusion period set by law and contended that the indictments were therefore null and void.  Fitzpatrick’s attorney at the time, Stephen Pidgeon, had argued that point to the court.  He and Fitzpatrick parted ways in October 2010 after Pidgeon stated that the Monroe County judicial system was “hopelessly corrupt.”

Although Judge Jon Kerry Blackwood had stated that the grand jury indictments would stand despite evidence of a person serving unlawfully because there was “no evidence” that it was the same person, in consideration of the personal information collected by the court clerk during the grand juror selection process which The Post & Email has seen firsthand, it should have been possible to check.

The Fifth Amendment to the Bill of Rights is the only place in our nation’s founding documents which mentions grand juries.  Legal scholars and authors have stated that the grand jury was intended to operate without the oversight of a prosecutor and that “Today’s grand juries (especially at the federal level, but no less so in most states) offer little or no check on government power, and no longer protect Americans from improper or unnecessary prosecutions.”

Several states have stopped using grand juries altogether.  One of the grand jury’s roles is to inspect county jail facilities and provide recommendations for improvements, if needed.  The Monroe County jail has been described as “medieval,” placed under a “Plan of Action,” and must either be closed or vastly improved to remain open.  A state official has told The Post & Email that the jail cannot be restored but must be replaced with a new facility.

Recently in Seminole County, FL, a prosecutor bypassed the grand jury and issued accusatory documents herself which some legal analysts have stated are “amateurish” and will not withstand scrutiny.

On March 13, 2012, an alleged special grand jury issued an indictment for tampering with government records against Fitzpatrick with “Faye C. Tennyson” signing as foreman.  Judge J. Reed Dixon had told Fitzpatrick during the probable cause hearing that the entity reviewing the evidence against him would be a different group of people than those chosen for the two regular grand juries chosen on December 7 which Fitzpatrick had witnessed.  No evidence of the alleged crime is cited in the indictment, and a witness originally noted as “Conway Mason” is scratched out and substituted with “Martha Cook.”

In Tennessee, grand jurors are not required to take an oath to uphold the state or U.S. Constitutions, but rather, to perform “according to the best of your understanding.”  With conceivable pressure from judges, a long-serving foreman or a prosecutor, what is the “best” of a juror’s understanding?

The charging document and the arrest warrant are forgeries; we have Paul Rush acting under the direction of his boss, Steve Bebb, naming himself as my accuser; we have Martha Cook, who has been denying the role of accuser.  She has been charged criminally, and look at the report that was filed against her at the federal level for rigging the jury.  Martha Cook is under a criminal accusation that is active; no one has responded to it.  Martha Cook is accused of rigging juries.  We have a Habeas petition which points to Martha Cook, Faye Tennyson and Gary Pettway, and no one has responded to the Habeas.  The state has defaulted on it four times, and now it’s at the federal level.  The federal judge has ignored it.

On January 6, 2011, Fitzpatrick filed a criminal complaint against Cook with the U.S. Attorney for the Eastern District of Tennessee and other parties for “jury pool laundering, extortion, premeditated conviction, fraud, conspiracy and civil rights violations.”

Fitzpatrick claims that the Monroe County judiciary is guilty of treason.

The state is continuing to break the law and operate a government not f0und in our Constitution.  The treason continues.  With all of the information that we’ve collected, the treason continues.  Why does it continue?  Because we can’t stop it.  I’ve been at this for 23 years.  I can’t stop it.  There’s no place to go.  I can’t go to any law enforcement official in the country.  Why?  Because the grand jury is no longer working.  We don’t have a grand jury anymore.  There’s no way to stop it, and people in government are corrupted.  The charge against me is based upon a forged criminal complaint.  How do we stop it?  We have to get the grand jury back together…We the People.

It may be that the country is lost.  It may be that there is nothing else that can be done.  I challenge anybody in this country to come up with the same kind of information that we have, not to mention any more than we have.  It may be that nobody really cares.  I’m told that there are people out there who do care.  I read in Glenn Beck’s “Foreword” to this book that’s now 30 years old that he finds the answer in employing the power of “We the People.  All you have to do is read the book.”  But it ain’t gettin’ the job done.  That isn’t how this is going to happen.

It’s not about me.  It’s about doing something to raise this issue up nationally, and that if you don’t stop this, it’s going to come your way next.  So far, it has not taken hold, and we’re out of time.

The Post & Email can confirm that the documents sought by Monroe County Detective Conway Mason were given to law enforcement officials on February 7, 2012. Both the Knoxville FBI and Tennessee Bureau of Investigation had been contacted twice in December 2011 regarding the possibility that the documents in question were locatable.

Fitzpatrick: “The Grand Jury Has Been Demolished” added on Friday, April 20, 2012

One Response to "Fitzpatrick: “The Grand Jury Has Been Demolished”"