“THAT HIS SACRIFICE WILL NOT BE IN VAIN” 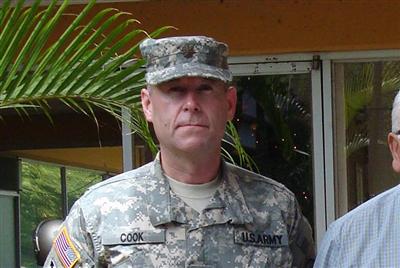 A Patriot’s light has been dimmed, yet not extinguished. His deeds inspire us and his challenge shall long outlast the great USURPER, Barry Soetero, AKA Barack Hussein Obama. A true “hero” and dignified gentleman has run his race to the end.

I witnessed, first-hand, the horrendous, destructive application of the corrupt, unconstitutional use of Federal powers under the hand and direction of the great USURPER:

In September 2009, I attended a hearing in the Federal Court Building in Columbus, GA. Then-Maj. Cook brought charges against Barry Soetoro to certify his eligibility to be “President of the U.S.” and refused further assignment until his “legitimacy” was certified in a court of law. I met the gentleman and his attorney, Ms. Orly Taitz, briefly.

I was witness to what happened “inside” and “outside” the court room. The “FIX” was in and he never had a chance at REAL “due legal process”.  The Department of Defense threatened his civilian employer, a private defense contractor, with suspension of all military contracts, unless Maj. Cook was terminated from his “civilian” job. His ex-employer confirmed, no less, that fact.  He was terminated!!

Outside the courtroom, prior to proceedings within, my party had walked across the street from the court house to a very small coffee shop while waiting for the court house opening.  We were seated at about 8:30 A.M. While seated, to my complete surprise, in walks none other than the U.S. Attorney General, Mr. Eric Holder, without escort. He quickly received his order and left promptly, as if desiring to be incognito. He never appeared in open court to participate publicly in the proceedings and was never to be seen again…..the question is why??? One has to think hard about the relationship of a “Federal Judge” and a visiting AG of the U.S.

My affidavit attesting to these facts is presented herein as an attachment and was filed with Attorney Orly Taitz.

I extend my heartfelt condolences to Lt. Col. Cook’s family. I shall dedicate myself to NEVER, NEVER, let this man’s sacrifice be in vain. I shall attend the hearing before the Chief Administrative Judge, Michael Malihi, in Atlanta, GA on January 26. The subpoena to the great USURPER is attached.  To those who have the courage to step forward, please help me in achieving that goal.

How Can We Pay Tribute to a Fallen Warrior? added on Tuesday, January 24, 2012

2 Responses to "How Can We Pay Tribute to a Fallen Warrior?"