(Dec. 3, 2011) —  Every one of our ‘politicos’ – whether in office, just leaving office (don’t let the door hit you on the way out, Barney), or running for the highest Office in the land – knows beyond a shadow of a doubt, that we have a totally ineligible, unlawful, unconstitutional, non-natural born Citizen(ship-unknown) usurping the Office of President of the United States!

Yet none of them will speak up in defense of you and your Constitutional right to a Constitutionally eligible person in the Office of President and Commander in Chief.

Why, even this week, the most-Constitutional Michele Bachmann had the gall to tell Greta van Susteren that non-natural born U.S. Citizen Marco Rubio would make a great V.P. pick – in direct contravention of your right to a 12th Amendment (ratified in 1804 – last sentence) Presidentially qualified natural born Citizen in the Office of Vice President of the United States.

Obviously just getting Obama out by elections alone will not solve the problem of corruption in government (like publicly naming non-nbC’s for V.P., as above):

Therefore, since those entrusted with job of upholding and defending our rights under the Constitution (i.e. a natural born Citizen candidate for President and/or V.P.) cannot be counted on, it becomes incumbent upon We The People to Restore the Constitution and take our country back, one community, one county, and one state at a time – as pointed out in JB Williams latest article, ‘POLITICIANS “NOT THE SOLUTION” TO AMERICA’S TROUBLES’ posted at www.ThePostEmail.com).

The first step is to do your part to make sure that non-nbC Soetoro/Obama/WHAT’s-his-name is not on the ballot – first in the Primaries in all 50 states, and then, if that is thwarted by corruption, for the General elections on 6 Nov, 2012. Formal challenges have already been filed in 4 states so far: NH, GA, AL, and HI. The depth of corruption has already been seen in the first challenge ‘hearing’ in NH, but the more the exposure, the closer we come to the truth of the cover-up of Obama’s ineligibility.

You can do your part by going to www.ObamaBallotChallenge.com, and join in the effort. There is a link for each of the 50 states there, with lots of instructions on how to get started in your state, – and how to participate in other state challenges also.

There’s no sense in waiting for Sheriff Joe to announce his findings early next year – and possibly only remove the Dictator-in-Chief’s name from the Maricopa County, or all of AZ, ballots; we must start now, as Joe Biden is running around the country filing Obama’s candidacy in all the states as we speak – as he did personally in NH (we’ve got to keep him busy doing something important, now don’t we?).

NOTE: Perhaps anti-illegal immigration-ist Joe Arpaio’s endorsement of pro-illegal immigration-ist Rick Perry (there’s an oxymoron if ever there was) will awaken Mr. Perry to the fact that Arpaio’s endorsement may come with some strings attached – like recognition of the fact that we have Treason in progress at the White House: 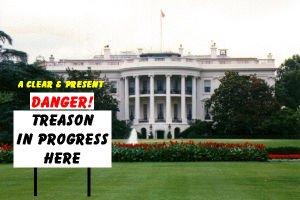 As J.B. concludes in his article linked above:

There are no sidelines. There is no place to sit this one out. Each American patriot is either an active part of the solution, or they are by default, part of the problem.

As American patriot Samuel Adams was heard to say:

“If ye love wealth better than liberty,
the tranquility of servitude
better than the animating contest of freedom,
go home from us in peace.
We ask not your counsels or your arms.
Crouch down and lick the hands which feed you.
May your chains set lightly upon you,
and may posterity forget that you were our countrymen.”

In Liberty and in Truth;

If Ye Love Wealth Better Than Liberty, the Tranquility of Servitude Better Than the Animating Contest of Freedom… added on Saturday, December 3, 2011

2 Responses to "If Ye Love Wealth Better Than Liberty, the Tranquility of Servitude Better Than the Animating Contest of Freedom…"