HOW TO REMOVE THE FEATHERS FROM A “FOWL” WASHINGTON DC TURKEY! 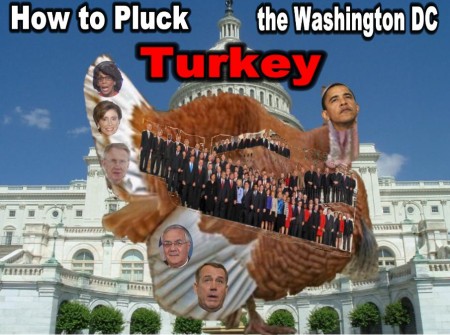 (Nov. 27, 2011) — “The traditional way to clean a turkey is to pluck the feathers off and then gut the bird. This will keep the skin on the turkey which will give it more moisture and flavor after you cook it.  You can also save the “giblets” (heart, liver, gizzard) from the bird and make a traditional turkey gravy later when you cook it.”

“It is preferable to pluck the turkey before removing the entrails.  This keeps feathers from getting inside the bird cavity and in general keeps things cleaner.   If you’ve already field-dressed the bird, don’t worry about it but be sure and rinse out the cavity good to remove any feathers when you are done plucking.”

“The Washington, DC Turkey has about 545 feathers on it and you can pluck them one at a time, or remove them in large chunks by dipping the “bird” in hot water (people resistance).  Some people use boiling water but many people swear that water at 140 degrees is the optimal temperature for plucking the feathers.  Once the “bird” has been dipped in hot water, the feathers will come off much easier and they also are easier to handle since they are damp and they won’t fly around the room.”

All the people need to do is to get a big enough pot (determined resistance) to dip the turkey into the “hot water”!

Putting turkey humor aside for the moment, just about anyone who is paying attention agrees that the U. S. Congress (or all of Washington, DC, for that matter) has reached the level of almost total dysfunction.  There are a few individual exceptions, but not many.  Either the problems have become so large that ordinary men just can’t solve them and we are just passengers on a run-away train, or the widening ideological divide between the two parties and the general population renders them impotent.  We tend to subscribe to the run-away train theory where the locomotive is being fed by the “fowl” smelling, explosive fuel of political and ideological insanity.

The foundation under which the American federal government operates (a Constitutional Republic) is sound, but the “players” have so corrupted the system over the last 100 to 150 years, there are serious cracks running through the building above it.  This “fowl” system that has been built above the foundation has no future other than total collapse, a “turkey” by any other name.

But rather than tearing down the foundation and rebuilding it with who knows what, the only logical answer is to replace the occupants of the “Turkey House” with individuals who have the necessary personal characteristics to restore the Republic, namely honor, integrity and honesty.  These individuals must also be drawn back to the principles of liberty and individual freedom embodied in our Declaration of Independence and the U. S. Constitution, that so many brave and patriotic souls gave their lives to preserve.  The question is, where do we find such individuals and do they even exist today?  And if they do exist, would they be willing to enter the “Turkey” house?  They might if we could clean up the leftover “stuff” deposited on the floor of the “house” these last 100 years.

Now plucking the occupants out of Washington, DC’s Turkey House can either be done one at a time, or by yanking them out of that “fowl bird cage” in large groups.  The large-group-yanking process tends to oscillate back in forth from election cycle to election cycle and has proven ineffectual in “fixing” the system because it seems we never yank enough of the fowl feathers at any one election cycle to do any good.  (i.e. 2010)   The other problem is, once the new occupants are initiated into the “system”, many can’t resist the heavy influence placed upon them by the current occupants to be corrupted.  It seems that once the fledgling congressman or senator is absorbed into the “Turkey House,” they become one of the turkey feathers in short order.

Could it be that we are putting our efforts in the wrong location?  Could it be that a wiser move would be to undermine the turkeys in Washington, DC by undoing what they have done ….. by determined resistance at the local level?  Don’t we always hear that “all politics is local?”

Let’s just say that we have a fairly high, straight wall constructed from Lincoln logs or Legos and they are stacked in an interlocking manner that makes for a pretty sturdy structure.  We’ll name the wall the “Obstruction and Tyranny” wall.  And let’s just say we start at the bottom and pull out just one of the logs or Legos (the local level approach).  The wall will probably still be standing.  But let’s go further and start pulling out more of the pieces at the base (more determined resistance at the local level).  After a certain number of logs have been removed from the base the wall will collapse.  The point being is that we don’t have to blow the whole wall up in a violent event to knock it down, we only have to pull out a few pieces at the bottom.

America is unique in comparison to most other countries.  Besides the centralized Federal Government, we have states, counties and cities, all with their own political power and that political power effectively dampens federal power.  The states have constitutions and the counties and cities have charters, all having the force of law.   In other words, all political power in America is distributed across a wide cross section of government control.  Power in most other countries is held by a centralized government and all laws, rules and edicts emanate from that central authority.

In response to the increasing rise of federal power over the last several decades, many state legislatures are mounting challenges to federal authority under the power granted to the states and the people by the 10th Amendment.  Four states have written their own immigration laws to protect their citizens from the deleterious effects of illegal immigration.  However, the “Turkeys” at the U. S. Justice Department are countering these new state immigration laws with federal lawsuits and the whole dispute will end up in the U. S. Supreme Court for a final determination before too long.

Over half of the states have challenged Obama Care as well.  This issue is now before the U. S. Supreme Court and a decision is expected by June of 2012.  If the court rules in favor of Obama Care, then the federal government will have been successful in obtaining almost absolute power over the people and it only gets worse from there.

Unfortunately, the relationship between individual states and the federal government is clouded by one all-important element ….. money.  The FEDS mandate actions on the states and in some cases provide money to the states to fund the mandate.  In other cases the FEDS mandate specific actions, but provide no money.  Because the states spend more money than they take in, even though they are required to balance their budgets, they rely on the FEDS to make up the difference.  This leaves the states in essentially a blackmail status with the FEDS.  Challenge the FEDS and lose the money or the promise of money, or capitulate to the FEDS with their heads down and their tails (or tail feathers) between their legs.

However, besides the every-two-year election cycle, there is another way to reduce the power of the Federal Government and that is by thousands of small, determined actions by the people at the local level, when the states, counties and cities refuse to challenge the FEDS.

States, counties and cities pass hundreds, if not thousands of laws every year.   Many of these state or local laws are passed in compliance with federal laws, or at the behest of special interests.  A very large percentage of the people know nothing of these new laws and if the laws go unchallenged, they become permanent and woven into the legal fabric of government control, whether the laws are constitutional or not.  We addressed this problem of passing too many laws in an article we wrote in June of 2004 entitled, “Every Time A New Law Is Written“.

If it is true that “Governments are instituted among Men, deriving their just powers from the consent of the governed“, if the “governed” do not exercise their right to provide that consent to those that govern them, government will fill the vacuum, and ladies and gentlemen, government has filled that vacuum in spades because the “governed” have been looking the other way for a very long time.

“The Parallax Prophecies” predicts that “if we do not organize, without a doubt, the Republic that we know and what the Founding Fathers envisioned, is going to die a slow, agonizing and wrenching death.  It is already showing tell tale signs.  If free Americans do not come together in a cohesive fighting unit, our freedoms and liberty will fade into the dark chasm of socialism, radical environmentalism and globalism.  If we will not come together and be willing to join forces with those that are fighting this war against government excesses and abuses, our children and grandchildren will have to live in the invisible chains of the New World Order, perpetrated on us by internationalists and moneychangers who want our money, our wealth, our resources, our land and our freedom.  Make no mistake, they are well on their way to getting it.  Are we going to stop them, or are we going to just sit back and let them do it?  If we are not willing to fight to save this Republic, then we must suffer the consequences and not complain when we come face-to-face with the Government we allowed to exist.  If freedom is to be preserved, we must start a nationwide Culture of Resistance ….. now!”

Most, if not all of our articles are aimed at igniting this Culture of Resistance.  Soon we will be announcing the launch of our “County NRC” initiative and it is our firm hope that we can add to the process already underway of challenging government at the local level so as to start pulling the individual pieces out of the “Obstruction and Tyranny” wall and pluck a few more feathers out of the Washington DC Turkey.  When we launch our initiative you will be able to find the details HERE.  As our first order of business we will commence the process of “Purging America of International Influence” at the local level.  We encourage those that follow “The Parallax Prophecies” to check back often.

Plucking the Fowl Feathers Out of the Washington, DC Turkey! added on Sunday, November 27, 2011