WHO POSSESSES “STANDING,” AND WHY? 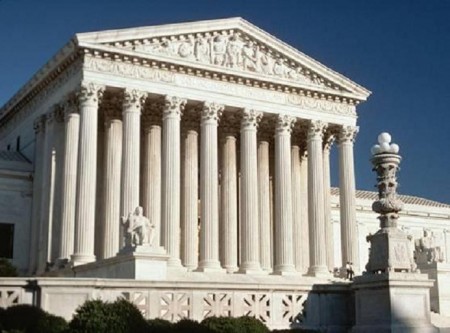 (Jun. 29, 2011) — The U.S. Supreme Court on June 16, 2011 decided Bond v. United States, 564 U. S. ____ (2011). The Bond decision does not say anything that has not been expected regarding filing a case which can establish standing to challenge Putative President Barack Obama on his legitimacy to be President.  It has always been my position that a criminal defendant or someone being compelled to pay money challenging an Obama-endorsed Congressional statute which is the basis for the criminal charge against him or her or the money payment requirement will have standing to attack that law and in so doing also to challenge Obama’s legitimacy to be President.  This is not to say that this is the only way that our courts should recognize someone like the plaintiffs I represented in Kerchner v. Obama, 612 F.3d 204 (3rd. Cir. 2010), cert. denied, 131 S.Ct. 663 (2010), who raised legitimate claims of injury to their Fifth Amendment right to life, liberty, safety, security, and tranquility, to have standing to file an action challenging Obama’s eligibility to be President under the “natural born Citizen” clause of Article II, Section 1, Clause 5.

In the Bond case, Congress passed 18 U. S. C. §229, a law regulating the possession and/or use of certain chemicals and passed to implement a chemical weapons treaty ratified by the United States. Bond argued that Congress sought to regulate conduct that is strictly local in nature and should be left to the States to control. Bond therefore argued that the federal statute violated the 10th Amendment and that Congress therefore had no right to regulate the conduct which the statute prohibited. That was the basis for the attack against the charging statute.

Both the District Court and the Third Circuit Court of Appeals found that Bond had no standing to challenge the statute because the State was not a party to the litigation. In the Supreme Court, the Government changed its position and conceded that Bond did have standing to challenge the criminal statute. The Supreme Court appointed an amicus curiae attorney to defend the position of the Third Circuit Court of Appeals that Bond did not have Article III standing. The U.S. Supreme Court, reversed, finding that Bond, a criminal defendant, has Article III standing to challenge that law in the District Court and on appeal to the Third Circuit. It said that “incarceration . . . constitutes a concrete injury, caused by the conviction and redressable by invalidation of the conviction.’”

Amicus curiae also argued that Bond was raising the rights of third parties (the State), and therefore principles of prudential standing also prevented the Court from exercising jurisdiction. The Supreme Court ruled that Bond actually sought to protect her own constitutional rights. Hence, it found that, even if State’s rights were involved, she raised her own constitutional rights and so prudential standing was satisfied. The Court said that the key is whether a litigant can show that he or she has suffered an “injury that is concrete, particular, and redressable,” regardless of the context in which the challenge is raised (i.e. 10th Amendment federalism or even separation of powers doctrine). The Court’s discussion of separation of powers as we shall see below becomes very important in the context of challenging a law signed by Obama and thereby Obama himself.

Applying the Bond decision to a case challenging Obama’s eligibility, one would have to be criminally charged or be compelled to pay money under a statute passed by Congress when Obama was President. One would argue that under Article I, Section 7, Clause 2, laws passed by Congress need the action or inaction of the President (the veto power) before they are allowed to become laws. This requirement satisfies separation of powers and checks and balances doctrine. One would argue that Congress passed the charging statute,  with the President’s action or inaction. One would argue that a legitimate President must satisfy the eligibility requirements of Article II, Section 1, Clause 5, which contains the “natural born Citizen” clause. Then one would argue that the law is not valid because it never was presented to a legitimate President for consideration under Article I, Section 7, Clause 2, arguing that Obama is not a legitimate President because he does not meet the requirements of the “natural born Citizen” clause. Hence, one would argue that separation of powers and checks and balances have been violated. Obama’s eligibility to be President under the “natural born Citizen” clause would be the basis for the attack against the charging statute. Since the office of the President is a constitutional office, the de facto officer doctrine (that we should treat Obama as the President by fact even though he is not by law) should not be an obstacle to this argument.

Support for this argument is found in the Court’s explanation of how a litigant can file an action under a separation of powers argument. The Court said:

“In the precedents of this Court, the claims of individuals—not of Government departments—have been the principal source of judicial decisions concerning separation of powers and checks and balances. For example, the requirement that a bill enacted by Congress be presented to the President for signature before it can become law gives the President a check over Congress’ exercise of legislative power. See U. S. Const., Art. I, §7. Yet individuals, too, are protected by the operations of separation of powers and checks and balances; and they are not disabled from relying on those principles in otherwise justiciable cases and controversies. In INS v. Chadha, 462 U. S. 919 (1983), it was an individual who successfully challenged the so-called legislative veto—a procedure that Congress used in an attempt to invalidate an executive determination without presenting the measure to the President. The procedure diminished the role of the Executive, but the challenger sought to protect not the prerogatives of the Presidency as such but rather his own right to avoid deportation under an invalid order. Chadha’s challenge was sustained. A cardinal principle of separation of powers was vindicated at the insistence of an individual, indeed one who was not a citizen of the United States but who still was a person whose liberty was at risk.”

It is important to understand that the Court is willing to grant standing in these situations because the litigant can show that he or she has otherwise suffered “justiciable injury.” In the Bond case, the injury was the real potential for criminal conviction, incarceration, and the loss of liberty such government action brings.

But the Bond Court also cautioned so that its decision is not misinterpreted. It said:

“An individual who challenges federal action on these grounds is, of course, subject to the Article III requirements, as well as prudential rules, applicable to all litigants and claims. Individuals have “no standing to complain simply that their Government is violating the law.” Allen v. Wright, 468 U. S. 737, 755 (1984). It is not enough that a litigant “suffers in some indefinite way in common with people generally.” Frothingham v. Mellon, 262 U. S. 447, 488 (1923) (decided with Massachusetts v. Mellon). If, in connection with the claim being asserted, a litigant who commences suit fails to show actual or imminent harm that is concrete and particular, fairly traceable to the conduct complained of, and likely to be redressed by a favorable decision, the Federal Judiciary cannot hear the claim. Lujan, 504 U. S., at 560–561. These requirements must be satisfied before an individual may assert a constitutional claim; and in some instances, the result may be that a State is the only entity capable of demonstrating the requisite injury.

In this case, however, where the litigant is a party to an otherwise justiciable case or controversy, she is not forbidden to object that her injury results from disregard of the federal structure of our Government.”

The Court also said that the ultimate issue of the statute’s validity turns in part on whether the law can be deemed “‘necessary and proper for carrying into Execution’” the President’s Article II, §2 Treaty Power and that the Court expressed no view on the merits of that argument which the Court of Appeals would address on remand.

So, in a Bond-like case, the law is attacked as invalid because Congress did not have constitutional power to pass it (relying on principles of federalism). In an Obama case, the law is attacked because it was never submitted to a legitimate President (relying on separation of powers and checks and balances principles). In both cases, the charging law is being attacked as unconstitutional. In both cases, the challenger, under threat of criminal indictment or having to pay money, being the basis of a threat to his or her individual constitutional rights, should have standing to attack the statute.

The point is that with Obama, one charged with a criminal offense or compelled to pay some money because of a law passed by Congress and allowed to pass into law by the action or inaction of Obama, acting as the President, would have standing to challenge the constitutionality of the law based on the law lacking the action or inaction of a legitimate President which is needed under Article I, Section 7, Clause 2 of the Constitution for laws to be passed. The standing argument would be made in the context of separation of powers and checks and balances.

Bond v. United States and Standing to Challenge Putative President Obama on His Eligibility to be President added on Wednesday, June 29, 2011