SO WHEN WILL THE PEOPLE TAKE ACTION?

The Post & Email had filed a complaint against Denise Barnes in January 2011 for failure to provide a court document after having been sent payment for it as well as charging what we perceive to be unreasonable costs for transcripts.  Mr. Fitzpatrick was told that the transcript relating to his trial on December 1, 2010 would cost $1,600, while The Post & Email was given a price of $1,200.

The transcript in question emanates from an arraignment hearing for Fitzpatrick on June 28, 2010 which he himself was not able to obtain.  The Post & Email finally received the transcript in late January 2011.  After sending Fitzpatrick a copy, Fitzpatrick claimed that the transcript did not accurately reflect the proceedings of that day.  Other criminal defendants have claimed the same in regard to their court transcripts in both Monroe and McMinn Counties.

The first page of the transcript stated that the hearing took place in McMinn County (page 2), which is incorrect.  It occurred in Monroe County at the Madisonville courthouse.  There were other alterations from an initial version posted on the internet watermarked “Friends of Politijab,” one of which was that it appeared unsigned by Ms. Barnes.

There also is no signature on the “Politijab” version of the arraignment of Darren Wesley Huff, whose arraignment was held the same day as Fitzpatrick’s in the same courtroom.

The version which The Post & Email received contains a final page with the signature of Ms. Barnes, a penned-in date change from “October 6th, 2010” to “1-21-11,” and the following certification:

I, the undersigned Denise E. Barnes, Official Court Reporter and Notary Public for the 10th Judicial District of the State of Tennessee, do hereby certify that the foregoing is a true, accurate, and complete transcript, to the best of my knowledge and ability, of all the proceedings had and evidence introduced at the arraignment in this case, in the Criminal Court for Monroe County, Tennessee, heard on the 28th day of June, 2010.

I do further certify that I am neither of kin, counsel, nor interest to any party hereto.

Therefore, the first page of the transcript states that the hearing took place in one county, and the last page states that it happened in another.

Page 7 of the transcript reports Judge Ross saying, “I have never appointed a Grand Jury foreman in McMinn County.  I will never appoint one.  That’s not one of my duties.”

However, an appointing order from McMinn County signed by Ross contradicts that statement:

Could that be why Ross made the reference to McMinn County while he was holding court in Monroe County?  Did he recall that he had appointed a grand jury foreman approximately two and one-half years before and lie about it?

The text of the complaint reads:

To: Federal Grand Juries #1 and #2 sitting in Knoxville, Tennessee

1.  The proffered “official” transcript of the arraignment hearing of 28 June 2010 is received by way of Sharon Rondeau (Enclosed)

2.  The transcript statement is knowingly falsified.  The doctored transcript is a criminal instrument.  Carroll L. Ross, Denise E. Barnes and Martha M. “Marty” Cook are named partners in the outlawry their tortured transcript works to protect.

5.  The necessity regarding federal Grand Jury intervention in the exercise of the POWER of PRESENTMENT is urgent.

Fitzpatrick has accused the FBI and other law enforcement personnel with treason for abrogating their responsibility to enforce the U.S. Constitution to protect the citizens from government overreach.

Recently Fitzpatrick received an invoice for court costs from his December 1, 2010 trial in the amount of $4,776. 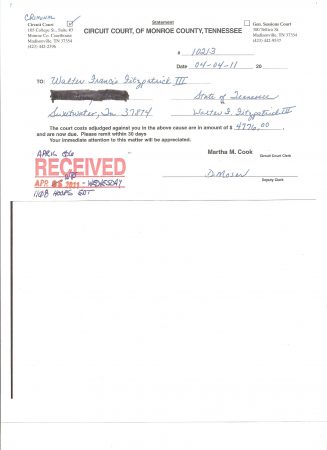 Invoice received by Walter Fitzpatrick for court costs in regard to his case stemming from an illegally-serving grand jury foreman.

Fitzpatrick has supplied evidence that in Tennessee, grand jury foremen are serving numerous consecutive terms, contrary to the law, and that the grand jury, which was included by the Framers of the U.S. Constitution in the Fifth Amendment to “protect against abuse of government authority in a legal procedure” have been overtaken by the government, thus denying defendants their right to a fair trial.  The judges in the Tenth Judicial District in Tennessee have been allowing tainted grand juries, along with foremen hand-picked “from wherever they choose,” to issue indictments against citizens.  One former grand jury foreperson stated that she had served “20 years of total dedication to that position” and that the decision not to reappointed her for another two-year term “was handled in a cold, lowdown & impersonal way.”

Fitzpatrick has stated that there is nothing in the Tennessee Code Annotated, Section 22-2-314, which allows for any member of the grand jury to serve consecutive terms.

The Tennessee Constitution states in Article I, Section 6:

That the right of trial by jury shall remain inviolate, and no religious or political test shall ever be required as a qualification for jurors.

That the people shall be secure in their persons, houses, papers and possessions, from unreasonable searches and seizures; and that general warrants, whereby an officer may be commanded to search suspected places, without evidence of the fact committed, or to seize any person or persons not named, whose offences are not particularly described and supported by evidence, are dangerous to liberty and ought not be granted.

That excessive bail shall not be required, nor excessive fines imposed, nor cruel and unusual punishments inflicted.

Today The Post & Email contacted the Department of Justice regarding the apparent inaction on the part of the Knoxville FBI office in regard to Monroe County corruption.  After speaking with four different people, we were given an email address to which we sent the following complaint:

Good afternoon.  I have spoken with several people at the press office of the Department of Justice today, who advised me to send an email regarding extensive corruption which my newspaper has been investigating for close to a year and which appears to have been ignored by the local FBI office in Knoxville, TN.

I own and operate The Post & Email (www.thepostemail.com), an electronic newspaper dedicated to exposing corruption in government and violations of the U.S.. Constitution, of which there are countless examples today.  We have been focusing on several things, one of them being blatant criminal activity in Monroe County, TN.

I have spoken with members of that community who have been beaten, tasered, injured, falsely arrested and imprisoned by sheriff’s deputies, then denied medical attention while in the Monroe County jail.  I have hard evidence of jury-rigging, witness-tampering, and wrongdoing on the part of defense attorneys, judges, court clerks, and grand jury members.  The judges hand-pick the jury foremen so that they will obtain the desired result of either convicting an innocent person or exonerating a guilty one.  The court transcripts do not reflect what transpires in the courtroom, and the court reporters charge exorbitant fees for their doctored products on top of receiving their regular salaries.  There are flagrant violations of the law each and every day, and many of that county’s citizens are living in abject fear.  It is reported that 70% of them are on some kind of probation, which is a statistical improbability unless innocent people are being hauled into jail.

I have spoken to people who have been terrorized, had their lives threatened, had vehicles and other property seized unlawfully, and inmates who have reported a jail that is unfit for any human habitation, let alone 200 inmates.  The plumbing doesn’t work and state health codes are violated with regularity.  These complaints have been sent to the Tennessee Corrections Institute, which has done next to nothing about them, in violation of Tennessee state law.  Many inmates die in the jails in Tennessee or shortly after they are rushed to the hospital or released due to endemic black mold in the jails.

Yesterday I spoke to a man who had been incarcerated in the Monroe County jail who reported that there is substantive evidence that Monroe County Sheriff Bill Bivens is deeply involved in the drug trade.  While his deputies round up and bring in drug producers and agents, the sheriff himself is profiting from it.  The corruption is so deep that people are bribed to testify to certain things in court and innocent people are fined thousands of dollars to fill the coffers of the Monroe County government officials.  Inmates’ trust accounts are set up without their knowledge in the name of Sheriff Bill Bivens, and most of them never even know that there is money there.

I have extensive evidence of the aforementioned crimes posted at the newspaper, www.thepostemail.com.  Simply perform a search under “Monroe County,” and dozens of articles will appear.

Your attention to this matter is greatly needed.  It is my understanding that all FBI agents must swear an oath to uphold the U.S. Constitution.  Will you do this in the case of Monroe County, TN?  And can you explain why the Knoxville FBI has done nothing?

I would appreciate hearing from you at your earliest convenience.

The Post & Email received the following response from the Department of Justice:

Thank you for emailing the Office of Intergovernmental and Public Liaison at the U.S. Department of Justice in Washington, D.C. Your issue or concern is very important to us. Someone from our staff will respond to your email within 7 – 10 business days.

While incarcerated last year, Fitzpatrick was sent a total of $75.00 which was placed into a commissary account without his consent and of which he became aware only after The Post & Email informed him of the donations.  He had requested that the funds be turned over to him upon his release from the Monroe County jail, which did not occur.  The Post & Email filed a complaint with the Knoxville FBI and, in a check dated December 28, 2010, was sent to Fitzpatrick at his home and received on February 8, 2011.

An interview with LCDR Walter Fitzpatrick will be published shortly as an addendum to this piece.

What are the people of Monroe County waiting for?