An Open Letter to Herman Cain

IS HE A SUPPORTER OF THE U.S. CONSTITUTION OR JUST ANOTHER POLITICIAN? 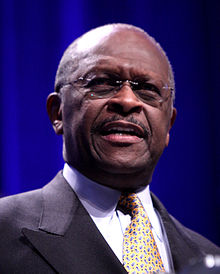 Herman Cain was born in 1945 and was the chairman and CEO of Godfather’s Pizza. He is also a radio show host.

(Apr. 10, 2011) — Hey, Mr. Herman Cain. So now you’re an Article II Constitutionalist? Perhaps you would like to expand on some of the comments you made in your interview with Shark-Tank.net?

Below are some excerpts from a report at WorldNetDaily on that Shark-Tank interview, together with a few comments and questions of my own – questions that are on the minds of at least 275,000,000 Americans (91%, according to polls).

Here are some extracts, with my comments and questions in italics:

Cain continued, “It’s just not an issue that I have studied enough to have a view on one way or another. I’ve been on the radio for five years fulltime. That wasn’t an issue, quite frankly, that I spent a lot of time studying. And I respect people who believe he should prove his citizenship.”

Hey, Mr. Cain!  How can any of us respect you when you don’t respect the 275 million Americans who think that this is an issue worth studying – for the last 3 of your 5 years fulltime on the radio?

“If I were president and someone were challenging me on that, I’d produce my birth certificate. End of discussion (-NOT! The biggest question on the minds of 275,000,000 Americans, and you say ‘End of discussion’?),…

“I, frankly, have not looked at all the facts.” (If you haven’t looked at the facts by now, Mr. head-in-the-sand, then why should we look at you for leadership of this Constitutional Republic – whose so-far unamended founding documents require that only a natural born Citizen shall be eligible to the Office of President and Commander in Chief?  And where were you when LTC Terry Lakin was sent to Leavenworth for just demanding that the facts – that  you haven’t been bothered to look at – were presented to show that Obama could issue anything other than unlawful orders?)

Perhaps you will now be willing to step up to the plate and start telling us what you are prepared to do about resolving the Treason of a usurper in our White House, instead of just telling us that you will show us your Birth Certificate!

And perhaps you will be willing to show us that you are not like the pusillanimous prevaricators who surround us – such as Rep. Darrell Issa and Glenn Beck and John Boehner and U.S. Supreme Court Chief Justice John Roberts – who all know that Obama is completely ineligible for the Office, but are afraid of the repercussions of exposing him. Let me assure you, the repercussions will become even greater with each day that the truth is covered up by the likes of you and ‘W’ and the Congress and SCOTUS – and the Enemedia.

14 Responses to "An Open Letter to Herman Cain"