(Mar. 8, 2010) — According to The Sonoran News, when two people requested Obama’s Selective Service registration through the Freedom of Information Act, each received a computer printout with different information.

In a televised interview with George Stephanopoulos on September 7, 2008, Obama stated, “I had to sign up for Selective Service when I graduated from high school…in 1979.”  However, the requirement to register with the Selective Service had been suspended in 1975 and was not reinstated until 1980.

According to the Selective Service, “Federal and many state laws require registration-age men to be registered with Selective Service to remain eligible for applying for the following benefits: student financial aid, government employment, employment with the U.S. Postal Service, job training, and U.S. citizenship for male immigrants.”

The Sonoran News reports that “The Military Selective Service Act required men born in the calendar year 1961 to register on any of the six days beginning Monday, July 28, 1980.”

Mr. J. Stephen Coffman sent in a request for Obama’s Selective Service registration form on October 13, 2008.  When he received the information along with a letter from Mr. Richard S. Flavahan, Associate Director for Public Affairs and Intergovernmental Affairs, he noted that the computer date stamp showed “September 9, 2008,” which was more than a month before he made his FOIA request.  It also happened to be two days after Obama’s televised interview with George Stephanopoulos.

The accompanying computer printout which Coffman received was labeled “RIMS History Inquiry Screen.”  The registration number on the Selective Service form was 61-1125539-1.

Mr. Kenneth Allen sent in a FOIA request for Obama’s Selective Service registration form in February 2009.  The computer printout he received was entitled “Registrant File Inquiry Report.”  The registration number was 61-1125539-1, the same as on the form Coffman received.

The Sonoran News also stated that while the computer printout which Allen received showed an update to Obama’s record was made on June 25, 1991, the information Coffman received did not.

A WorldNetDaily article dated November 7, 2009, quotes Mr. Flavahan explaining that the “089” at the beginning of the DLN for Obama’s Selective Service form indicated that it had been keyed in by the Internal Revenue Service.  However, that explanation does not shed light on why the computer printout which Coffman received showed a DLN beginning with “808.”

This is not the first time that Obama’s purported Selective Service registration has been questioned.  Debbie Schlussel, an attorney and blogger, reported shortly after the presidential election that the Selective Service registration form provided to “a retired federal agent” showed signs of forgery.  At that time, the requester made the following statement regarding the documentation he had received:

Having worked for the Federal Government for several decades, I know that the standardization of DLNs have the first two digits of the DLN representing the year of issue. That would mean that this DLN was issued in 2008. The DLN on the computer screen printout is the exact same number, except an 8 has been added to make it look like it is from 1980 and give it a 1980 DLN number. And 1980 is the year Senator/President Elect Obama is said to have timely registered. So, why does the machine-stamped DLN reflect this year (2008) and the DLN in the database (which was manually input) reflect a “corrected” DLN year of 1980? Were all the DLNs issued in 1980 erroneously marked with a 2008 DLN year or does the Selective Service use a different DLN system then the rest of the Federal Government? Or was the SSS Form 1 actually processed in 2008 and not 1980?

Ken Allen made the following statement to The Post & Email on March 7, 2010 regarding the differences in the documents which he and Coffman received several months earlier and reported on by The Sonoran News:

I didn’t know what to expect when I got the SS records. So I compared them to Debbie Schlussel’s and found a few differences. The document I got should have been identical to all the others but they weren’t.   Then Linda (Bentley, reporter at The Sonoran News) and I started emailing, talking about the SS documents and I sent her a copy to compare with any that she might get from her FOIA’s. You read what she found, all I know is that every document regarding Obama has some serious flaws. That’s another reason I filed my suit.  A question for anyone, why would Obama seal “all” of his records and then let Selective Service release these documents? This is proof that not all documents regarding Obama are Exempt under the FOIA, these are considered personal records and according to Judge Zapata are exempt.

According to The Sonoran News, “Once issued, DLNs do not change.”

However, at some point after 1980, DLNs were extended from ten digits to 11.  As reported by WorldNetDaily, “The government reports at the signing by Obama in 1980, Document Locator Numbers were only 10 digits, an identifier that later was changed by the Selective Service to be 11 to help track them.”  The same agent who responded to both Allen and Coffman, Mr. Flahavan, told WND:  “The field was later expanded to 11 digits to accommodate the decade change in 1990 and subsequent decades to avoid duplication of some Document Locator Numbers.”

The Sonoran News stated that the 11-digit configuration “appears to be consistent with registrations added after 1980, and possibly not until 1982.”

The Sonoran News reports that it recently received 17 Selective Service records through a FOIA request filed within the same time frame as Obama’s required registration.  All 17 records contain a four-digit year in the date stamp on the Selective Service System Registration Form, while the same form sent to both Coffman and Allen on Obama contains a two-digit, off-center date stamp.

Allen’s Version of the Documents

The documents below were extracted from PDFs released to The Post & Email from Ken Allen:

On December 29, 2008, The Obama Conspiracy compared the signature on Obama’s purported SS form to his signature on a presidential candidate form: 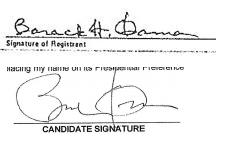 Did Obama actually ever register with the Selective Service? If so, did he register late?  If he registered at all,  which birth certificate did he present?  Would the COLB shown during the 2008 presidential campaign have been enough?

The Sonoran News has stated that “It became obvious records were created after the fact for Obama and were later changed.”

Why has this record been made available to the public through FOIA requests, but his birth certificate, college records, school records, medical records, and passport records have not?

Was an amendment to Obama’s Selective Service file made in 1991 or not?

Why are there two different DLNs for the same SS record?

Why was the record accessed on September 9, 2008, two days after Obama appeared on national TV during the campaign discussing his registration with the Selective Service?  Could any FOIA requests resulting from the television interview already have been received at that time by Mr. Flahavan’s office?  Was someone trying to cover for Obama and therefore accessed his file soon after his public misstatement of fact?

Are there multiple records of Obama’s Selective Service registration? added on Monday, March 8, 2010

17 Responses to "Are there multiple records of Obama’s Selective Service registration?"