Election irregularities in NY-23rd too great to be ignored

(Nov. 27, 2009) — The news out of New York State bodes ill for the survival of the American Republic.  The widespread fraud involving voting tallies the night of the Election has given way to reports of election-machine tampering via a virus, consistently anti-Hoffman biased tallies, and other such irregularities that make one thing certain:  there was no democratic election in the New York 23rd Congressional District.  There was an un-democratic selection aided and abetted by Election Officials and workers who are so sloppy with their mathematics and ethics and the observance of the law, that in truth no number in the results to-be-certified remains undoubtable.

The latest news comes from St. Lawrence County, the northernmost in the district, lying along the St. Lawrence River and the international border with Canada.  On Tuesday, Nov. 24th, the Country Board of Elections has certified election results in several precincts in which — get this — there are more votes counted for candidates than ballots cast!

Talk about a new twist on “stuffing the ballot box”!

Writing for the Gouverneur Times, Dr. Richard Hayes Philips, whom the paper describes as,

. . . one of the leading election fraud investigators in the United States.  His book on the 2004 Ohio election, Witness to a Crime: A Citizens’ Audit of an American Election, based on examination of some 30,000 photographs of actual ballots, poll books, and other election records.

explains in detail how the results certified in St. Lawrence country are mathematically impossible, even though the ytally up.  Impossible because they clearly indicate that the voting machines tallied more votes than the paper ballots which went into them.

For six election districts in St. Lawrence County (the 2nd, 4th, 6th, and 7th districts in Canton, the 14th district in Massena, and the 2nd district in Oswegatchie) negative numbers appear in the column for “blank” ballots, known in other states as “undervotes.”

Blank vote counts are ballots in which the voter did not choose any candidate in a given election and are determined by subtracting the total number of votes cast for the candidates from the number of voters who completed ballots.  The remaining number would be those voters who didn’t cast a vote for that election.

In Canton’s 7th district, the certified results show a total of 148 ballots cast. The results of those votes were counted as 88 votes for Owens, 11 votes for Scozzafava, and 80 votes for Hoffman.  The problem is that these numbers add up to 179 votes counted for the candidates, and there were only 148 ballots cast;  St. Lawrence County certified these numbers to the state as accurate with the number of ‘blank’ ballots reported as -31.

Since these results have been certified, it is evident that the Election Board has consented to fraud, and is no longer legally incupable of prosecution for use of their authority under color of law to deprive the civil rights of voters in the said districts.

This is so, because there can be no excuse in accepting that machines tallied more votes than ballots cast, unless you consent to the very fact that the machines are recording a tally which ostensibly never occurred, and thus in accepting such a tally they are certifying the candidates’ votes not as the people voted, but as the machines voted. And that is not an election, it’s a selection.  Whoever is responsible with tampering with the machines is involved in voter fraud, since they are attempting to make the vote appear differently than it would be, but the Board in certifying has committed Election Fraud, because it is giving its authority to patently erroneous results.

In the comments on the article another noted investigator has given her opinion how such fraudulent results can be achieved. Bev Harris, founder of BlackBoxVoting.org, a “national nonpartisan nonprofit elections watchdog organization,” writes:

So one would expect that IF there was fraud in a New York election that had just converted to software-driven systems, the same “roll back the odometer” tactic might be used with the software.

And with impossible numbers, NEGATIVE numbers appearing in some NY-23 locations, it raises questions about what precise code was on the machines and memory cards in all New York locations. Technicians were visiting some — but not all — machines to put in a fix, shortly before the election. They fixed something. But not always.

We just don’t know what they fixed. And probably, we never will know. And this is precisely the problem with concealed counting: We just handed ultimate control of our elections to some technician whose name we do not even know.

You can read all of Bev Harris’ commentary in the comment section of the article itself.

The Post & Email will now comment on the results that the St. Lawrence County Board of Elections certified, to highlight other anomalies which point to voter fraud and which should have been the basis for the Board to call for a paper recount.

At 3:05 pm on Nov. 6, the unofficial tallies of votes for Congressional Special Election were as follows: 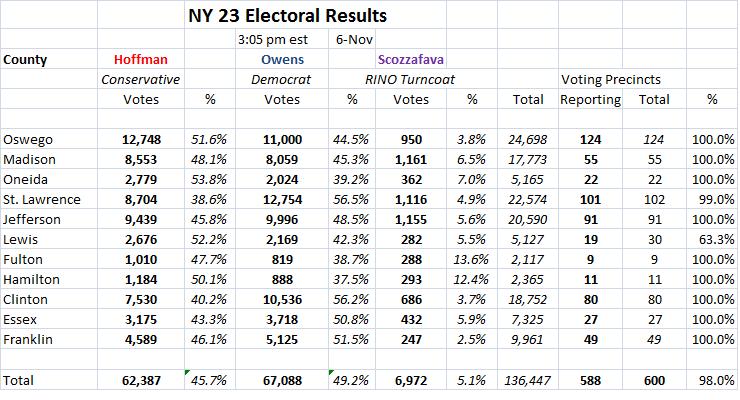 St. Lawrence county is indicated as having tallied the votes in 99% of the precincts.  This being the case, you’d expect the final tally to be very close to those numbers, but statistically it is not.

UPDATE (Dec. 15, 2009): According to the NY State Board of Elections, Owens was the endorsed candidate of the Democrat and Working Family Parties, Dede Scozzafava of the Republican and Independent Parties, and Hoffman of the Conservative Party.

And in a race in which Hoffman quite unexpectedly conceded on the grounds that he trailed by more than 3,000 votes, St. Lawrence County’s discovery of 273 more votes for Owens than for Hoffman meant that without that discovery Hoffman would have “lost” with 546 less votes.  But St. Lawrence county is only 1 of the 11 counties, and its voter representation was only 16.54% of the tallies in the election.  In other words, if the same rate of vote-discovery occurred elsewhere, there would be nearly 6 times the discrepancy in the vote count, for more than 3000 vote swing, enough to give Hoffman the election, fair and square.  Though one cannot make such an extrapolation, because every county has a different voter turnout, it does show that someone in St. Lawrence County did their fair-share of the job to ensure an Owens victory.

If the vote-discovery had nothing to do with human intervention, one would expect that in other races on the same ballot in the same county, that 7.2% of the vote would have also been discovered after Nov. 6th.

Let’s take a look at each county-wide race, in St. Lawrence Country, considering simply the total votes counted, and comparing this to the total votes in the Congressional race on the same ballot:

These are the races which all used the same 102 voting machines.  Since the entire county voted for each race you’d expect nearly identical numbers, if there were identical interest in the different races.  And while that nearly never happens, the Owen-Hoffman-Scozzafava race was surely the most followed in the national and local press.

In the race for County Coroner — a race in which you could vote for 2 candidates — the results, as tallied, were as follows:

In this race all other candidates got only 20 votes according to the tally.  That means, if the results are to believed, that some 2,846 voters — nearly all Conservative party members — only selected one candidate, even though they could choose 2 (though perhaps only Lawrence was endorse by their party).

Evidently the Coroners job and the District Attorney’s job are held by different parties.

In the race for State Supreme Court Justice for the 4th Judicial district, a race in which each voter could select 2 candidates, the results, as tallied, were as follows:

This means that some 499 Democratic voters, 2,259 Republicans and 293 Conservative voters failed to vote for 2 candidates.

In the Congressional Special Election the vote tallies were as follows:

Did all these voters cross over and vote Democratic?

Alternatively, considering that the Congressional race had apparently 9,517 more voters voting than the County Coroner’s race, one must assume that either 2,314 Democrats voted Republican in the Coroner’s race, or that all those  4,423 Republicans/Conservatives/Independents abstained from voting in the Congressional Race.  In the first case you still have 3,155 missing votes (2,109 votes if Working Families Party’s voters crossed lines in the Coroners race).

Finally, when one compares the results of both races in which all parties could ostensibly vote, the Congressional had 4,363 more votes cast than the Supreme Court race.  But Owens got 4,033 more votes than the Democratic candidates in that other race.  Where did these come from?  Are we to believe that the only individuals who did not vote in the Supreme Court Justice race were Owen’s supporters? That is just not credible. Statistics would say that the difference in votes between the races would be distributed similarly to the overall results of the Congressional election, 60-40% for Owens/Hoffman.  Not 90% for Owens alone.

Since Hoffman “lost” the election by little more than 3,200 votes, discrepancies of these sizes (2-5k) are disturbing. It appears that in the Congressional race some 2,200 Republican/Conservative votes disappeared, and at least an additional 2,000 Democratic votes appeared.  That’s a discrepancy of 4,200 votes in total, 1,000 votes more than the number by which Hoffman is said to have lost the race.  And this in only one county!

However, until one knows more about the election rules in NY, a more certain conclusion cannot be had.

* In these races a voter could select 2 candidates; but whether they did or not is not indicated in the vote tallies on line. (In the previous edition of this report, I missed that notation in the online results.)

Election irregularities in NY-23rd too great to be ignored added on Friday, November 27, 2009