(Oct. 14, 2009) — What most people know is that the Associated Press (AP) is one of the largest, internationally recognized, syndicated news services.  What most people don’t know that is in 2004, the AP was a “birther” news organization.

How so?  Because in a syndicated report, published Sunday, June 27, 2004, by the Kenyan Standard Times, and which was, as of this report, available at

the AP reporter stated the following:

Kenyan-born US Senate hopeful, Barrack Obama, appeared set to take over the Illinois Senate seat after his main rival, Jack Ryan, dropped out of the race on Friday night amid a furor over lurid sex club allegations.

This report explains the context of the oft cited debate, between Obama and Keyes in the following Fall, in which Keyes faulted Obama for not being a “natural born citizen”, and in which Obama, by his quick retort, “So what? I am running for Illinois Senator, not the presidency”, self-admitted that he was not eligible for the office.  Seeing that an AP reporter is too professional to submit a story which was not based on confirmed sources (ostensibly the Obama campaign in this case), the inference seems inescapable: Obama himself was putting out in 2004, that he was born in Kenya.

The difficulty in finding this gem of a story is hampered by Google, which is running flak for Obama:  because if you search for “Kenyan-born US Senator” you wont find it, but if you search for the phrase without quotes you will find links which talk about it.

For those who believe what they see, here is the screen capture of the page from the Kenyan Sunday Standard, electronic edition, of June 27, 2004 — Just in case that page is scrubbed from the Web Archive: 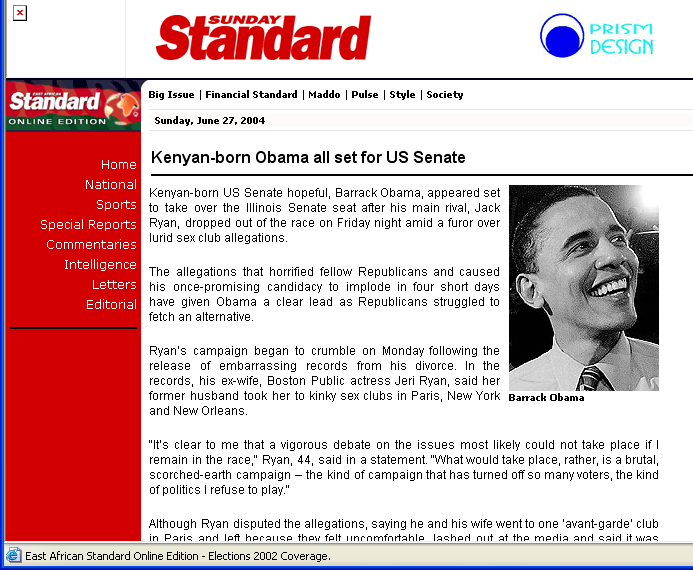 Readers should take note that this AP story, was syndicated world-wide, so you should be able to find it in major newspapers, archived in libraries world-wide.  If any reader does this, please let The Post & Email know, so that we can publish a follow up-story.  You can scrub the net, but scrubbing libraries world-wide is not so easy.

Hanen of Sentinel Blog Radio broke the public news of the existence of this AP story at on October 14, 2009 at 12:31 pm.  However, The Post & Email can confirm that a professional investigator had uncovered this story months ago, and that certified and authenticated copies of this report, meeting Federal Rules of evidence, have already been prepared and archived at many locations nationwide.

It should be noted that on January 8, 2006, the Honolulu Advertiser also reported that Barack Hussein Obama was born outside the United States.

A Chronology of Deceit

One can now ask an important question which has not yet been emphasized enough:  “Just when did Obama begin to publically claim he was born in Hawaii?” This question is distinct from the question, “Just where in fact was Obama born?”, and from the other question, “What do official documents say about where he was born?”

Regarding his claims, we can summarize what is known:

1. As of Monday, Aug. 28, 2006, Obama’s Campaign was putting out that he was born in Hawaii.  This is known from the introductory speech given by Prof. George A. O. Magoha, Vice-Chancellor of the University of Nairobi, on the occasion of a speech given there by Senator Obama that day. (One presumes that the Vice-Chancellor was given notes from the Obama campaign, as is customary on such occasions)

2. From the newspaper reports above, it is clear that the Obama campaign was putting out that he was born in Kenya, or overseas, during the period of June 27, 2004, until January 8, 2006.

3. In October of 2004, during the ABC Chicago Affiliate’s broadcast of the Obama-Keyes debates, Obama openly admitted — he conceded — that he was not a natural born citizen. (C-Span aired the uncut version of the debates, which contained this exchange, in the second half of April, 2005)

4. It is known from a classmate of Obama at Harvard University, that while at Harvard, Obama at least on one occasion admitted that he was born in Kenya. (This friend went on record on a call in radio program in Idaho in early July, 2009)

If any reader can find a link which documents a claim to a birth location before Aug. 28th, 2006, which differs from this timeline or which supports it; please let The Post & Email know of it, by posting it in the comment section below.

In a follow up report, The Post & Email has published a brief analysis of the Google Newspaper archive, which shows that Obama’s story changed after June 27, 2004.

Finally, that the AP did cover this story, reprinted by the East African Standard, can be seen from the citation made to AP stories about it (Jack Ryan dropping out of the race), in the following contemporary news articles, which however are incomplete:

(Oct. 17, 2009) — As a supplementary update to this article, The Post & Email adds the following report, which confirms the attribution of the above article to the Associated Press, and repeats the claim.

Modern Ghana published an AP report on Nov. 4, 2008, which claimed Obama was “Kenyan-born”.  You can read it for yourself at:

To forestall internet scrubbing, David Crocket at “Oil For Immigration” has screencaptured the page:

The article reads, in part:

After almost two years of campaigning, Democrat candidate Barrack Obama, Republican, John McCain yesterday brought their train to a halt in their respective home states to await the verdict of Americans.

So far, the odds favour the once underdog in American politics, Obama, the African-American Senator from Illinois State .

A Congressional Quarterly (CQ) politics monitored on BBC put the Kenyan born American ahead of his rival, Senator McCain.

This report has been supplemented by the following reports at The Post & Email:

Obama concedes he’s not a NBC, in Obama vs. Keyes 2004 Debate