(Sep. 26, 2021) — An article dated September 23, 2021 in “Natural News” invokes independent journalist and “Fox News Nation” host Lara Logan as a source, but Logan claims she played no role in the story and was never contacted by the outlet.

Prepare for a flood of intel in today’s Situation Update podcast shown below. Beyond the world bombshell DARPA document leaked to DRASTIC, which shows that EcoHealth Alliance and Fauci conspired to release aerosolized, skin-penetrating spike protein nanoparticles into wild bat populations in China (which would immediately leap to humans as planned), we also have bombshell intel about something else that makes it even worse.

DRASTIC has confirmed that Daszak and Fauci, working via the Wuhan Institute of Virology (WIV) were able to create 180 strains of coronavirus bioweapons and put them under the control of the communist Chinese (an act of treason). We now know from other sources that CCP-run bioweapons deployment teams have crossed the US border, carrying MERS-augmented biological weapons with at least a 30% fatality rate, with plans to release them in major US cities when commanded to.

“DRASTIC” is an apparent reference to “Drastic Research,” which released a 75-page document appearing to describe a grant request of the U.S. government by Ecohealth Alliance president Peter Daszak in March 2018 titled, “Project DEFUSE:  Defusing the Threat of Bat-borne Coronaviruses.”

Some sources say the grant proposal was not funded.  However, the Ecohealth Alliance conducts research on bats and other wild animals to determine if certain viruses are transmissible to humans, and Daszak figures prominently into the COVID-19 “pandemic.”

Investigative journalist Lara Logan has confirmed all this through her own sources, as she is now warning that the migrant crisis in Texas is the “perfect cover” for America’s enemies to sneak in a dangerous biological weapon. Our sources, who have been in touch with Logan, have confirmed she knows much more but isn’t yet at liberty to go public with the full details.

Logan refuted those claims.  “…I had nothing to do w this,” she tweeted on Sunday. “I’ve never even been contacted by these people.”  In both that tweet and one which she claimed Twitter blocked, Logan appeared equally angry with Twitter as with what she said was a “BS article.” 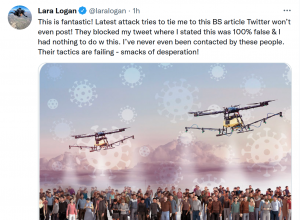 The 20 port-of-entry stations, the CDC states, are “managed by CDC’s Division of Global Migration and Quarantine” and “are part of a comprehensive system that serves to limit the introduction and spread of contagious diseases in the United States.”

Logan, who was born and educated in South Africa, resides in Texas with her family.  While covering the resignation of Egyptian president Hosni Mubarak in 2011, she was brutally attacked and “almost died,” according to an interview she gave Newsmax last year.

She is the recipient of numerous awards in the field of journalism and worked for CBS as a war correspondent between 2002 and 2018.

In a comment to the article’s claim as to Logan, “Rob Cunningham” wrote on Saturday:

Serious issue you need to address ASAP. Lara Logan has NEVER spoken with you, nor has she confirmed any of this “Intel” you’re claiming she has – I have 100% confirmed this fact. As they say, Fraud vitiates everything – including the credibility of this entire article. YOU have a serious issue on your hands.