Why Don’t Democrats Care That Joe Biden Is Hopelessly Corrupt? 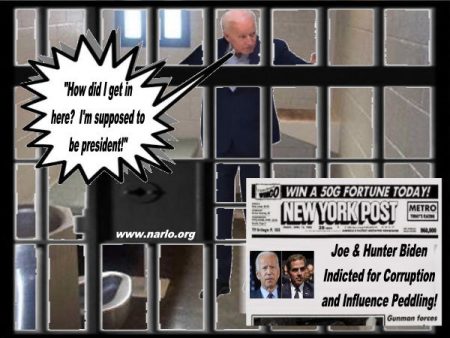 “I have consistently made it very clear that I will vote a straight Democratic [Republican] ticket, just like I do every election. From the local Constable to the President, I will be voting for every Democrat [Republican] on the ballot.  I don’t care to which policies they subscribe or how corrupt they might be.  My party, right or wrong, my party.”

Joe and Hunter Biden should be in jail, but they are not. The corruption and influence-peddling evidence is overwhelming and yet they are allowed to walk free.  The damning information is scuttled by social media and the mainstream news and hidden from view.  The questions about the corruption are never asked and the answers are never forthcoming.

From all appearances the Department of Justice is absent, the FBI won’t investigate and the news media is complicit in the cover-up of Biden family corruption.

John Durham’s investigation into the FBI Trump-Russia coup d’etat won’t be released before the November election.  If Biden is elected president, the Durham probe will most likely conveniently disappear.  The American people will never know the depth of deceit, deception and illegal activity perpetrated by politicians in the Democratic Party or high-level government operatives in the FBI, DOJ and the CIA to take down a sitting U.S. president.  The FIX is in and the American people can do nothing to stop it, short of armed revolution!

Unfortunately, no matter how corrupt, daft, gaffe-prone, or dishonorable a candidate might be, no matter how long he or she has served as a politician, the stupid voter will continue to vote that same person into public office, election cycle after election cycle, such that the same persons perpetrate the same indignities and injustices on the American people.  Somehow that just doesn’t seem very bright.

Johann Most, a German-American Social Democrat, stated that, “Whomever looks at America will see the ship is powered by stupidity, corruption and prejudice.”   Given Biden’s 47-year questionable history in public office, Johann wasn’t far off the mark.

But it is the people themselves who have allowed America to descend into the sewer of depravity, drug abuse, racism, rioting, violence and stupidity.  It is the flawed ideology of Progressivism that has infiltrated all of our institutions and brainwashed several generations.  It is the public school system and academia that have shoved Progressivism down our collective throats and perverted the minds of our young ones.

Dan Crenshaw, current representative of Texas, stated that, “Well-intentioned liberalism always leads to Progressivism.  There’s no choice.  Once that action is taken, the only thing left to run on is totalitarianism.”  If Biden wins the presidency, Crenshaw’s prognostication could be realized.

One might ask, how is it that Democrats believe in Climate Change (man-made global warming) and Republicans are skeptical?  If the science is clear and irrefutable, then the party with which you affiliate won’t change the science.

But the problem is, the science is not clear and irrefutable and those who believe in so-called Climate Change have been brainwashed with a fraudulent environmental agenda.  (See “Climate”)  The agenda is that man is evil and has damaged the planet beyond repair.  He must be reined in with strangling regulations and egregiously high taxes to pay for his alleged transgressions.  Man is guilty and must bow down to the all-wise, all-knowing, all-seeing, national and international environmental oligarchs.

Any normal, reasonable and prudent person, Democrat or Republican, would question the science and not be so hasty about capitulating to the Climate Change propaganda.  Sadly, most Americans are just plain stupid.  Their total amount of knowledge could be contained in the first inch of the ocean.  They know not of what lies below that first inch.

The same science argument can be applied to the Coronavirus.  Some science points one way.  A different science points another way.  The questions abound: lockdown or no lockdown; mask or no mask; school or no school; kids are immune; old people are vulnerable; vaccine or no vaccine?  What are the people to believe?  President Trump has tried to make policy to control the virus, but some argue his efforts were either mismanaged or not enough.  Could Biden as President do any better?  No one knows, but because there are so many unknowns and competing influences, it is highly unlikely.  The virus, like the weather, is a non-linear dynamic system and defies predictability.

Why is it that Democrats have moved so deeply into socialism and renounced the very foundation of our freedom and God-given, unalienable rights?  Why are they so anxious to tear down a system of government that has been the envy of the world for 250 years?  Is it just power for power’s sake?   Are they using the ignorance and stupidity of the masses to advance their goal of absolute power?  Is totalitarianism their final end game?  We may very well find out if Joe and Kamala win.

But alas, ladies and gentlemen, stupidity reigns.  Stupidity and blind party affiliation are why Democrats will vote for the hopelessly flawed, corrupt, morally challenged and intellectually deficient candidate, Joe Biden, and his power-hungry, racial zealot of a running mate, Kamala Harris.  The people may just get what they deserve.  The following story could be that unwanted wish:

“One night, you are sitting at the dinner table with your wife and two daughters when a lone, masked gunman crashes through the front door and threatens you with a gun, right at your own dinner table.  If you don’t turn over all your valuables, cash, checkbooks, your keys, your two young girls and your car, he will shoot the whole family dead.

”Paralyzing fear grips you. Your mind is racing, adrenaline surges through your body, sweat breaks out on your forehead and your heartbeat accelerates to a dangerous level.  You can’t think clearly. In a halting voice you try to talk the gunman out of what he is demanding you to do, but he is adamant and becomes even more threatening and irrational.

“You search desperately in your mind for other actions you could take against this real threat, but you come up empty. You sit there, drained of your ability to act in any meaningful manner.  You have no way to defend yourself, much less your family.  What choice do you have but to capitulate to the demands of the gunman or bring certain death to you, your wife and daughters?  As your car races away with the gunman at the wheel, you watch as your valuables, your checkbooks, your cash and your two young, innocent girls disappear into the night.  All you can do is to call the authorities and hope they can retrieve the most precious things in your life, your two beautiful daughters.  The rest that the gunman stole doesn’t matter.  It can be replaced.

”Despair overwhelms you.  Your ‘good’ life has just been shattered, and depending on the outcome, your life may be permanently torn to pieces.  You fight with your wife and she blames you for not doing anything, when in fact there was nothing you could do.  She cries uncontrollably and you try to console her.  However, she blames you because there is no one else to blame in the high emotional, irrational state in which she finds herself.

”The authorities search for the gunman but he is never found and your girls are lost in the shadowy world of swarthy men and white slavery.  You beat yourself up in your mind, asking over and over and over again, ‘What could I have done?’ No answer echoes back to take away your guilt and that sinking feeling of utter helplessness.

”Finally, anger and guilt consume you and you drift in and out of sanity.  Your wife leaves you because the glue that bound you together was your love and your two lovely girls.  You lose your job and your friends abandon you.  A serious threat suddenly entered your life and you were totally unprepared and had no way to defend against it.”

Beware of pending threats and be careful, voter, what you wish or vote for.  That unintended wish just might come true.

Now you can vote for Joe Biden for president, but don’t be surprised if the masked gunman who breaks into your home at night while you’re eating dinner to take your possessions, your guns and your two daughters turns out to be a Biden SWAT team, led by none other than Biden’s police force general, Beto O’Rourke.  Remember, Beto said he was coming after your guns.

But Biden is going to raise your taxes, regulate you to death with the Green New Deal, get rid of fossil fuels, steal your health care under “Medicare For All” and give free health care to illegal aliens and maybe even the vote, along with opening the borders, stopping all deportations and dismantling ICE.  He and his Democrat colleagues are going to pack the U.S. Supreme Court and repeal the Senate filibuster rule.  He’s promised to give all you ignorant millennials free college and forgive all college tuition debt.  He says he can do all this by raising taxes on the wealthy, but don’t kid yourself.

All this notwithstanding, Joe Biden is corrupt to the core and lies through his teeth.  So why on earth would Democrats vote for Joe Biden?   It would appear that stupidity knows no bounds and party blindness replaces logic, reason and common sense.

3 Responses to "Why Don’t Democrats Care That Joe Biden Is Hopelessly Corrupt?"