(Oct. 17, 2020) — A group of physicians from around the country terming themselves “America’s Frontline Doctors” is giving a live press conference Saturday afternoon similar to one it held in late July to much mainstream-media criticism given its position on the manner in which the coronavirus pandemic has been handled domestically.

A doctor speaking at 3:15 p.m. EDT said that urging Americans to “stay home” and not seek treatment is a failed regimen.  “We have treatments for coronavirus,” he said.

Another physician, who said he has founded a new charter school in Orange County, CA, reported that a total of 72 children have died from coronavirus in the U.S. as compared to more than twice that number from the flu during the 2019-2020 season.  Quoting several media reports, he said, “Schools in the United States must be open…we must open the schools and we must stop spreading unnecessary fear into our children.”

He cited “suicide” and “depression” as outcomes of school lockdowns.

Founder of “America’s Frontline Doctors” Dr. Simone Gold was suspended from Twitter for a week for reporting in July that from her experience, hydroxychloroquine is effective against the virus, which is also know as “COVID-19.” Both Gold and the first physician noted above are also lawyers, they have reported.

Both on Friday and earlier on Saturday, Gold tweeted that a second summit would take place on Saturday morning.

After participating in the first summit, Gold lost her position at a Los Angeles hospital, she reported, after which she became a client of Atty. L. Lin Wood of Atlanta, GA, who often assumes cases involving reputational damage such as that which occurred with then-Covington Catholic High School student Nicholas Sandmann.

Gold reiterated her loss of her job after speaking at the first summit.  “We took an oath to help other human beings…I say to you now that the evidence that early treatment works is overwhelming…”  She said that the “nearly one million” doctors in the U.S. should take a stand against “upside-down medicine” and that “there is no reason to be living in fear.”

AFD’s first “White Coat Summit” was largely banned by social-media outlets Facebook and Twitter with the claim that the doctors who participated were disseminating false information about COVID-19.

“The media and a lot of fake doctors on television will tell you hydroxychloroquine does not work,” another physician said at 3:22.  Citing the early intervention President Trump received after his COVID diagnosis, he said, “Early treatment is the key, and there is an inexpensive alternative.”

“We’re losing our country,” another said, faulting “the isolation, the lies…fear has never been virtuous; it has never helped anyone.” 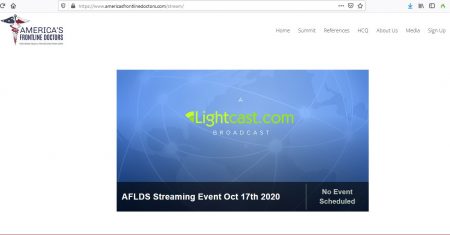