What Progressivism and Liberalism Mean (RR)

“Good evening, ladies and gentlemen, and welcome to ‘The Pulse of the Nation,’ the place to hear it here first. I asked Roving if I may speak to you – one on one – and he graciously said to take all of the time I want. Thank you, Roving. I want to address the concept of Socialism and why it is an impossible goal.

“First of all, people may say one thing yet mean another, and there’s no better example than ANTIFA and BLM goons looting and then burning down businesses owned by minorities. So this I ask you: would you trust them to run a country? I didn’t think so; if they can’t be trusted to do the right thing now, they sure as heck can’t be trusted in the future.

“And that brings us to the topic at hand: what Progressivism and Liberalism mean. The Democrats’ platform is based on the concept of being progressive, but how can one be progressive by eliminating liberties, such as the Bill of Rights, starting with the Second Amendment? The reduction of anything is, if anything, regressive.

“The Democrats refer to themselves as liberal by increasing control, adding rules and regulations and by raising taxes, but how can one be liberal by exercising more control? Supporting more regulations and increasing taxes actually means a reduction of current freedoms: more control and less liberalism is called illiberalism, a political condition known as Totalitarianism, another name for Communism where censorship reigns supreme.

“Life’s reality is that there will always be adversaries from any quarter, regardless of the date on the calendar. One must accept that fact and plan for the future. The implementations of draconian edicts, such as what Governor Newsom lays on Californians, is the modus operandi of a Socialist State, where churches are closed but drugstores (liquor and marijuana) are open. It is not supposed to make sense; the entire ridiculous rules emphasize control, complete control.

“The new religion is the State. Churches will be closed forever; Bibles will be confiscated. People in Michigan, Iowa and California will be the first to receive the wrath of out-of-control bureaucrats who answer to like-minded losers. Imagine all the judges as morally corrupt as Judge Emmet Sullivan; welcome to the future if Biden wins.

“So what we are looking at is negating all of the advances of freedom during the past four thousand years, freedom where a person can choose where they live, what to do with their life and how to explain the unknowns, such as why we are here, how did the universe come about, and what are our responsibilities towards members of our own species as well as other life forms that are part of the spaceship that we call Mother Earth.

“Over many millennia, we humans have come up with about every explanation of how to live in unity and harmony, just as we’ve invented ways to not get along, which we seem to have perfected to a ‘T.’ On one side we have the Golden Rule; another side wants to kill those who believe in the Golden Rule; and a third side doesn’t believe in anything. Those who protest, loot and burn are truly the lost souls of our nation, believing in nothing.”

“Excuse me, but we’ve got to take a commercial break.”

“Okay, we’re back. Take it away, Professor.”

“A vote for nothing, a vote for the insanity of the Left is to submit to the belief that progressivism means gaining; doing better; advancing where, in reality, the way the Democrats are using the word means surrendering; giving up; rendering those who died on the Normandy Beaches on D-Day as having died for nothing.

“The Democrats also describe their cause as liberalism, as if curtailing the freedom of speech is somehow beneficial. The truth of the matter is that if the DNC would describe their platform as regressive and suppressive then they would be truthful; until then, forget it. 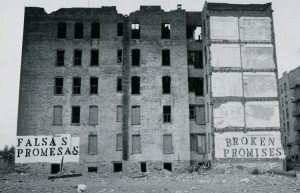 “The DNC says it’s for education, yet the inner-city kids are falling farther and farther behind. I judge by results and not some meaningless campaign promises: give the kids charter schools.

“One last point: I already mentioned our many worthless judges, but I want to say a word about all the morally corrupt district attorneys and the cops that do whatever the DA asks them to do to get a conviction. It’s wrong: stop it. The job of law enforcement is hard and dangerous enough without adding additional hurdles, such as following illegal orders from Democratic mayors and governors, and being gophers for morally corrupt DA’s.”

“Excuse me for interrupting, Professor Zorkophsky, but your time has expired.”

“Thank you for listening and we’ll now say goodnight: Goodnight.

“Good show, Zork. I wonder if anyone is listening. Burger time: my treat.”

What Progressivism and Liberalism Mean (RR) added on Saturday, October 10, 2020