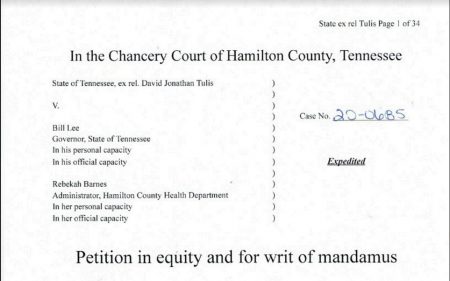 (Oct. 9, 2020) — The state response against the purported pandemic of “Covid 19” is probably the worst damage done to the people of Tennessee in the 81,937 days (as of Friday) since it was founded in June 1796 — worse, perhaps, than the War Between the States and its division of the state’s people between North and South. A petition for writ of mandamus in Hamilton County chancery court seeks to halt this 205-day-old state-caused economic, legal, social and cultural disaster of shutting down state of Tennessee.

An investigative reporter is demanding a judge nullify the state of emergency on grounds that Tennessee Gov. Bill Lee is refusing to obey the health law amid what he decries as a “health pseudo-crisis that has humiliated the people and aggrandized the state.”

The filing Oct. 2 by David Tulis, the self-styled “blogger with the biggest pen” and “smartest guy with a bow tie” at 92.7 FM, alleges Gov. Lee ignored the law for epidemic outbreaks and has since March imposed “an unlawful and damaging emergency regime” upon the state’s 6.8 million people.

“This petition is effectively a class action to halt the sun-blotting overgrowth of ‘government by emergency,’” said Tulis of Soddy-Daisy, father of four homeschooled children who runs Tulis Report 1 p.m. weekdays at NoogaRadio.

“In this lawsuit I represent the state of Tennessee, slashing miles and miles of kudzu smothering local economy. ‘The Good People’ have put tens of thousands of cooks, waitresses and service people out of jobs, behind on their IOUs and destroyed confidence.”

The pleading asks Hamilton County chancery court to issue a writ of mandamus and order the governor to obey the law and to end all emergency powers as they have not been lawfully evoked.

Tulis said “the so-called pandemic” is a “gross abuse and a fraud, a mass tort” because no determination has been made as to the complex of symptoms called Covid-19 and its nature and origins, “nor have these public servants found the contagious element” of this flu, Tulis said, “the effects of which in most cases are mild.”

“I have been studying the law and reporting this story for months,” Tulis said. “The state’s mass house arrest of the people and its insane, arbitrary controls and chin diaper demands — are boldly lawless,” Tulis said. “Gov. Lee and Becky Barnes at the Hamilton County health department have no basis on which to do a single thing against these symptoms. These people have not established the basis upon which to mitigate the purported disease. They haven’t identified the underlying disease under the rubric of SARS-CoV-2 or Coronavirus or Covid-19. That’s required by law.

“Their illegal regime has devastated the lives, finances, property rights of hundreds of thousands of people, separating children from elderly parents, shuttering small minority businesses by the thousands, oppressing healthy people with germ-factories on their faces. We are taking part in a gloriously vain health theater, and are wearing our tickets on our chins.

“Apart from the civil war, this state-caused disaster is the worst emergency ever faced by Tennesseans. The governor’s great sin is that he has directed the state’s police powers promiscuously and violently upon the broad mass of healthy people in our state, in violation of oath and law. He refuses to use his executive power properly — to use it narrowly and specifically upon the sick. That’s what he’s got wrong, and that’s what I aim to fix.

“I am asking the judge to close the doors of emergency management and compel the governor to determine which coronavirus they’re fighting, and, if a certain one is identified, to order his health officials to direct their attention to the sick and to use effective mitigation. CV-19 is the first of a likely series of false-flag 9-11-type medical attacks in this country using foreign law and foreign advice. We have time, with the judge’s help, to compel obedience to the law and to secure all our lost due process rights.” 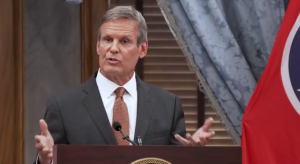