(Oct. 5, 2020) — No, it’s not “the economy, stupid.” In spite of the bipolar stock market since the China virus hit the world last March, our remarkably resilient economy––thanks to President Trump––is now on the ascent, employment rates growing once again, and consumer confidence increasingly robust.

And no, it’s not domestic policy, where, among his unprecedented accomplishments:

And no, it’s not foreign policy, in which Pres. Trump has succeeded in having:

NONE OF THE ABOVE

Why? Because Democrats simply don’t care for policies that benefit America and Americans.

The only thing Democrats have cared about for the past hundred years is winning elections at any cost, the better to inflict their strangulating socialist/communist and now Islamist style of government on the American people.

And in the past four years in particular, all they’ve been maniacally obsessed with is deposing, impeaching or insuring that President Trump not be reelected even if the perpetual sore losers of the left have to buy the guns they say they hate to wage a Civil War!

Why? Because the business mogul and non-politician Citizen Trump won the last election by exposing:

As I often and regretfully state because of space limitations, the above is the short list.

THE METHOD TO THEIR MADNESS

Dozens of books have spelled out in scandalous detail how Democrats have stolen elections over the past many decades by enlisting the votes of illegal aliens, absentee voters who simply don’t exist, and of course dead voters. 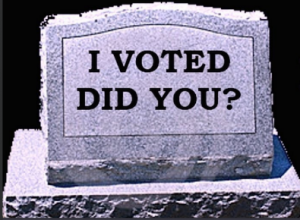 Among the most riveting are:

Eric Eggers’ Fraud: How the Left Plans to Steal the Next Election

Then there is Ballot Harvesting, a scheme exclusively used by Democrats to, ahem, win elections. How does it work? According to CA political commentator Stephan Frank, anyone––campaign workers, minors, illegals, et al––go door-to-door to “help” people fill out ballots that strangely favor Democrats, and refuse to collect ballots from anyone they suspect of voting the “wrong” way. They even pay them to vote the “right way.”

Intimidation is common and nothing stops them from altering ballots or throwing out ballots for the undesired candidate.

According to the National Conference of State Legislatures, currently 26 states allow this fraudulence, a practice being aggressively and successfully challenged by Tom Fitton of electionintegrity@judicialwatch.org.

Not to omit the now-defunct ACORN (Association of Community Organizations for Reform Now), a massive group of over 500,000 members which operated nationwide since 1970, registering voters and helping people sign up for government-financed programs.

ACORN was exposed for its criminal activities in 2009 by James O’Keefe, founder of The Veritas Project, resulting in multiple convictions for massive voter fraud in several states, and it closed its doors in 2010, although it is believed that splinter groups formed and are active to this day.

LET ME COUNT THE WAYS

The following is a tiny example of the vote-rigging methods used exclusively by Democrats:

Here’s a beauty from Doug Ross@Journal:

In PA, MI, MN, and WI, Democrat activists dressed in black robes have fundamentally rewritten state election laws. Among them are:

Mail-in ballots can be received up to seven days after the election and still be counted.

These ballots can be missing postmarks and still be counted.

The signature on the ballot doesn’t even have to match with that of the registered voter.

As a bonus, they have banned the Green Party from the ballot to prevent erosion of the Biden vote.

All these illegal proclamations directly contravene state law and are a clear violation of the U.S. Constitution.

More than 534,000 mail ballots were rejected during primaries across 23 states this year — nearly a quarter in key battlegrounds for the fall…(Washington Post).

In June, Democrats in NY signed into law a plan to give driver’s licenses to the state’s 725,000 illegal aliens, giving them the ability to vote.

In NC, voters reported receiving two ballots in the mail.

A top PA lawmaker called on the state to immediately expunge the names of 11,198 non-citizens whom the state confirmed are registered to vote despite not being eligible. 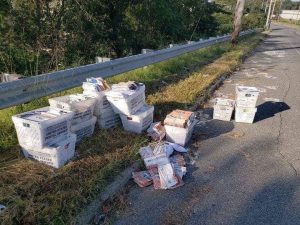 Reports in WI of three trays of mail containing absentee ballots found in a ditch.

The Public Interest Legal Foundation (PILF) of IN found the following: there may be as many as 350,000 dead people still registered to vote in U.S. elections; NY, TX, MI, FL, and CA accounted for 51 percent of the dead registrants; 40,000 likely duplicate voters may have voted twice; many state registrars have been forbidden to cull their voter rolls by the courts because hysterical Democrats claim some voters might be disenfranchised; NV’s largest county sent out more than 200,000 mail-in primary ballots to the wrong addresses, while 84,000 mail-in presidential primary ballots cast in NY City were disqualified.

Hillary Clinton: Biden “Should Not Concede Under Any Circumstances”––Mmm…does this pathologically sore loser know something We the People don’t know? 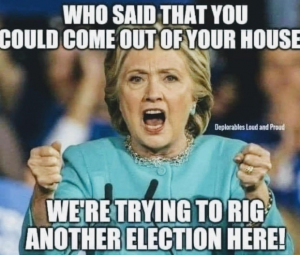 Study: 12 Percent of Voters in VA Could be Registered Illegally.

IL Sued After Refusing to Disclose Statewide Voter Data (the above six items reported by Joe Schoffstall of The Washington Free Beacon).

CA Man Finds THOUSANDS of Unopened Ballots in Garbage Dumpster, Workers Quickly Try to Cover Them Up Cover Them Up.

Not that proof is needed, but recently a Democrat operative told The NY Post’s Jon Levine: “You have a postman who is a rabid anti-Trump guy and he’s working in Bedminster or some Republican stronghold … He can take those [filled-out] ballots, and knowing 95% are going to a Republican, he can just throw those in the garbage.”

Not satisfied to leave voter fraud in the hands of paid lackeys, ACORN splinter groups, or state governors, the new Masters of the Universe in Big Tech have let their fellow leftists know that they’re all in.

According to a Google whistleblower in Allum Bokhari’s new book, #DELETED: Big Tech’s Battle to Erase the Trump Movement and Steal the Election, “When voters find out what Big Tech companies have done to meddle in the coming election, they’ll be rightly furious” at the attempts of Google, Facebook, Twitter, and other tech companies to sway the coming election in Biden’s favor.

“There is even a one-hour recording of Google’s co-founders and executives lamenting Trump’s election and vowing not to let it happen again,” according to Bokhari.

Democrats Sen. Charles Schumer and Rep. Nancy Pelosi are closely aligned with groups like Majority Forward (created in 2015) that funnel millions in secret cash into 2020 elections, according to FreeBeacon.com. While Democrats “have long railed against dark money in politics, they now outpace Republicans in its usage.”

Linda Goudsmit, author of The Book of Humanitarian Hoaxes: Killing America with ‘Kindness’, sees the upcoming election as another “sinister leftist, Islamist, globalist attack on America.” We are only weeks away from the election,” she said, and “the enemies of America are desperate and behaving like cornered animals poised for attack. Their survival is at stake because if POTUS is reelected, he will take down the Deep State and expose them all. They know it and Trump knows it.”

Goudsmit’s point is really the crux of the Democrats’ desperation these past four years. With a Trump victory, you can be sure that over the next few months, both Attorney General Bill Barr and U.S. Attorney John Durham will be handing out indictments to the many criminals from Barack Obama’s Federal Bureau of Investigation, Department of Justice, Central Intelligence Agency, Homeland Security, State Department, and every other department of our government, including the Military, in which he implanted his hate-America agents to commit either sedition or treason in the name of actualizing a genuine coup d’état against both a sitting president and America the Beautiful itself

It must be incomprehensible to them––they with all their prestigious college degrees, high IQs, impeccable credentials, fancy job titles, and positions in the highest reaches of the American government––that every ploy they used in the past, every arch machination, every exquisitely formulated plan of action…all resulted in four years of crashing failures.

Notwithstanding the fake polls showing the president’s faltering opponent ahead, it is clear that the internal polls of the president’s enemies tell them that he will win a second term handily, in fact in the proverbial landslide. 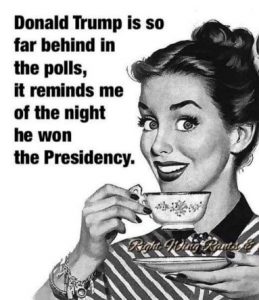 But now, quite suddenly and quite chillingly, President Trump is in the hospital fighting Covid-19. Is this the Deep State’s last malevolent attempt to prevent his reelection…and to save themselves from Leavenworth? Sounds about right to me. I only hope the president has several private armed guards and a food taster!