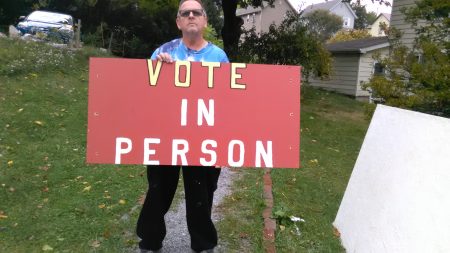 (Oct. 4, 2020) — For more than a decade, former Sgt. of Marines Jeffrey Harrison has been engaged in educating his fellow citizens about the meaning, as he understands it, of “natural born Citizen,” the term of art appearing in Article II of the U.S. Constitution reserved for the president and commander-in-chief.

Since at least 2010, as part of his activism, Harrison has frequently contacted his local, state and U.S. representatives over concerns that Barack Hussein Obama ran for and later, was elected to, the presidency while lacking the “natural born Citizen” qualification. In 2016, Harrison supported pursuing Articles of Impeachment against Obama prepared by the North American Law Center (NALC).

In the past, Harrison has purchased radio time at a local station to speak about the “eligibility” issue; made large signs and stood on street corners, contacted his congressman, Glenn Thompson; and handed out literature.  He is now focused on what he believes to be the ineligibility of California U.S. Senator Kamala Harris, Joe Biden’s vice-presidential nominee.  Harris was born in Oakland, CA on October 20, 1964 to foreign-citizen parents present in the United States on student visas, her mother from India and her father from Jamaica.

Harrison believes a “natural born Citizen” is an individual born in the United States to parents who are citizens, by birth or naturalization, at the time of the birth.  On Saturday he informed us that he distributed a signed letter he wrote along with copies of The Post & Email’s August 14, 2020 article, “Citizen Seeks ‘Court Order’ to Kamala Harris to Prove Constitutional Eligibility.” He has also requested a meeting with his district attorney, Ryan Sayers, to discuss Harris’s eligibility.

Harrison perceives a need for vetting of presidential and vice-presidential candidates as well as those running for Congress.  To illustrate the point, he recounted an experience from early in his military service wherein he faced discipline over a traffic ticket incurred prior to his service.  “One day before the graduation, they pulled me from the unit and said that I fraudulently enlisted,” Harrison recalled.  “I had to watch my platoon graduate from the bleachers.  A staff sergeant came by and said, ‘Where’s Pvt. Harrison?’ and I said, ‘Here I am,’ and then my platoon was marching by, and he said to the drill instructor to let me in so I could do the ceremony, but my drill instructor said, ‘He didn’t practice so he can’t.’  But I did graduate that day,” Harrison said, laughing at the recollection many years later.

“What happened to the ticket?” The Post & Email asked.

“They just let it go; they said it was cleared,” Harrison responded.  “I reported it when I enlisted but they overlooked that fact. So I was vetted, wasn’t I?  We need to vet those guys coming in to office.  Why don’t they get a background check, because who knows what they’ve done? We need to vet not only the president, but also Congress.  They’re privy to top-secret documents, and they need to be held accountable when they do what they do.  That includes backroom deals, on both sides.  They also live by a different standard as the rest of us, and we need to change that.”

Some of the steps that should be taken before an individual is elected to Congress are “a polygraph test” and “a background check,” Harrison said.

On Saturday Harrison told The Post & Email he “gave out 35 letters and your article” to attendees at a Trump promotional event in his hometown of DuBois, PA.  The letter reads: 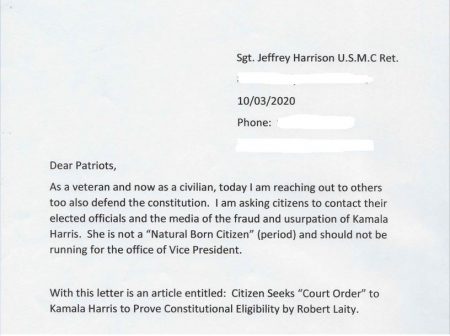 In addition to the “natural born Citizen” issue, Harrison said in recent weeks he has been standing on street corners holding signs he made himself urging voters to cast their vote for President Trump as well as to vote in person on November 3.  “I’m just thinking of things to do,” Harrison said, explaining that his activities vary from week to week.  “To do one sign takes three hours,” he added.  “I started with ‘Vote Trump 2020′ at a local business for a couple of months.’

Regarding the response from passing traffic as he displays the signs, Harrison said there are many “beepers” who “usually have their windows down.  When they come back, I yell out, ‘I’ll take it!'”

“I’ve been driving around DuBois a while, and there are so many ‘Trump’ signs it’s unbelievable,” he continued.  “I put a bunch of these signs up all over the place, and I have one up over the highway which says, ‘Vote in person.'”

“Do they let you do that?” we asked, to which Harrison responded, “Yeah; I’ve got connections. This is something I did last election, but this is a much bigger election.”

Regarding his insistence that Americans vote in person, Harrison said, “I don’t like the confusion and the inconsistency with the ballots.  Unless you’re sick or in the military or you physically can’t go, you should go because it will speed up the voting and there will be fewer snags.”

He will continue his political activism through the election, he said, and “next week I’ll really turn the heat up.”

“Why do you think Trump should be re-elected?” we asked, to which he replied, “He is so outstanding; he’s so intelligent; he’s kind, and he’s a fighter, and that’s what we need. He doesn’t take any guff. He’s clean; you can’t touch him. They’re trying to take him down.  Half the government is against him; the media is against him.  Being from New York, he’s been through the ring.  He’s already been banged a bit, accused of this and that.  He’s not perfect, but he will probably go down as the best president ever.”

In closing, Harrison said, “I would like to request that we say prayers for President Trump.”