A Conversation With The Neighbor

“I’M VOTING FOR THE FUTURE OF OUR COUNTRY” 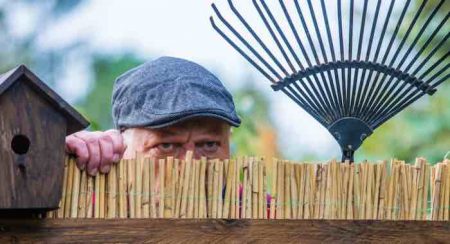 (Sep. 29, 2020) — Many fun-filled-stories have passed over our backyard fence, as my Jewish neighbor and I did the lean-on for many good years, always respective of the conversational taboo topics of religion and politics that is, until now, where nearly every face-cover-breath has become overtly political.

What a sight to behold, still leaning for support on a rake with one arm and the other over the fence, but now awkwardly separated by the governor’s mandated six-feet-of-separation, one with a face-mask (him), one without (me).

I’m voting against all the violence, arson and devastating riots

And so, as our friendly visit shifted from his dog eating the morning’s paper, to his almost inevitable statement he had been dying to make, “I just can’t believe that you are voting for Donald Trump!?!” My response caused him to step back from the fence when I replied, “You mean President Trump, right?” As he gave me that oh-come-on sarcastic look, I began to explain:

I’m not specifically voting FOR President Trump. What I am voting for is AGAINST the Democratic Party. He moved the rake uncomfortably to his other hand, as I went on…

I’m voting for the freedom of speech as our constitutional first amendment right to express our opinions, as we always have, normally, whether we agree with one another or not.

As a US Marine and former New York City Police Officer you know why I’m voting for my right to bear arms, which is granted to all of us by the Second Amendment. I realize that you don’t like guns and it is your right not to own any. But, as you know, Democrats are against both our first and second amendment rights and want to confiscate everyone’s guns.

I’m voting against all the violence, arson and devastating riots in all the Democratic-run cities which, up to this day, they continue to call ‘peaceful protests.’

I’m voting for the Police to once again be allowed to do their job and to once again be respected for doing it. Democrats are in favor of defunding and/or eliminating police. I often wonder if the BLM and Antifa marauders have ever considered that, once the police have been eliminated, who will be left to protect them – from us! And don’t laugh, because there are many of US who will not allow them to destroy our suburban towns or neighborhoods.

I’m voting for law and order with equal justice for all. Democrats want a two-tiered judicial system, where political power and money, with unethical paid-for district attorneys, as an example, refuse to charge the rioters.

I’m voting against Kamala Harris. It is my belief that Joe Biden’s dementia is real and that he is nothing more than a placeholder for the Harris presidency. Did you know that 61% of Californians, her home state, voted against Kamala in the presidential primaries? It remains a mystery to me why the Democrats would pick such an unpopular and radical candidate for VP.

“Really?” I replied. She is anti-Israel. She is anti-white-males which, if you’re counting, becomes two-strikes-against-you. She is in favor of illegal aliens over US citizens. She denies that we have a border crisis, wanting to disregard our sovereignty, with open borders, giving anyone who wants to come here free government-run healthcare, free housing, welfare and the right to vote, guaranteed for the Democrat who will make sure, in turn, that the freebies keep coming,

I’m voting for our manufacturing jobs to remain here in America instead of using cheap Chinese labor. Democrats, on the other hand, are being paid by China to stop President Trump’s tariffs and his Great American Comeback.

I’m voting for the military and the veterans who fought for this Country so that the American people, like you and me, could live in peace and be able to take full advantage of those freedoms.

I’m voting for the unborn babies who have a right to life, liberty and the pursuit of happiness, as all Americans do. But, the Democratic Party platform will allow unwanted newborn children to be starved to death, and call it “late-term abortion.”

I realize this might come under the heading of a rather unpleasant report, especially over the back fence, but, were you aware that a few years ago two journalists went undercover to expose Planned Parenthood for selling the body parts of late-term-aborted babies, a felony, but, the California Attorney General prosecuted the journalists and no charges were ever brought against Planned Parenthood? The AG at the time was Kamala Harris.

I’m voting for Christianity and the freedom of religion for all religious beliefs. The Democrats platform is anti-Christian.

I’m voting for the American Flag that is disrespected by the Democratic Party.

I’m voting for a return to basic logic as I wonder how many people would have been shot by police if they did not commit crimes or resist arrest. And, that answer would be – none!

I’m voting for a return to basic logic – if you don’t want to get hit by a car, don’t be involved in violent protests while you are in the middle of the street. Don’t stop or prevent a car from moving unless you want to risk getting hit by that car.

Sadly, I have a hard time believing that you or many other lifelong-Democrats are actually voting for the not-so-covert Harris administration. I might understand it better if you said you just hate Trump but, as you can see, there is much baggage that comes with your voting against him, rather than voting for, the American ideals and freedoms that we have enjoyed our entire lives.

I’m voting to reelect President Donald J. Trump because, if he does not win, the America that you and I grew up in will be gone forever.

Maybe you and your wife might consider, even just for this one election, looking into what other Walk-Away-Democrats are saying. I’ll get you a link to their Facebook page, where it uses Kenny Rogers’s advice of https://www.facebook.com/walkawaydemocrats “Know when to walk away…”

But, for now, gotta run; no point in getting The Boss annoyed, knowing she has an entire Honey-Do-List written out for me…;)

Fredy Lowe — Bio and Archives Fredy Lowe served proudly in the United States Marine Corps and the New York City Police Department. He has been a citizen journalist for nearly ten years writing for Canada Free Press, Before It’s News, Conservative News & Views, Ammoland, The Post & Mail, and others.

A Conversation With The Neighbor added on Tuesday, September 29, 2020

One Response to "A Conversation With The Neighbor"