When Will Democrats Finally Get Tired Of Voting Democrat? 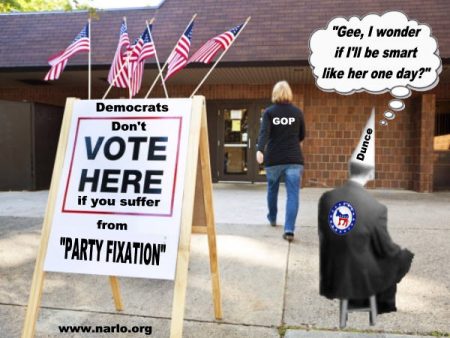 (Sep. 26, 2020) — “There is only one thing that gives me hope as a Republican, and that is the Democrats.  It’s going to be hard to do a worse job running America than the Republicans have, but if anybody can do it, it’s the Democrats.”  P. J. O’Rourke, contemporary political satirist

“My party, right or wrong, my party.”  I was born a Democrat.  I was raised a Democrat and by God, come h*** or high water, I’m going to vote Democrat, even if the party platform is a socialist manifest.  The same goes for those raised as Republicans.  “My party, right or wrong, my party” is the mindset of most American voters, on either side of the aisle, with the exception of the Independent voter.  Unfortunately, most Americans are afflicted with this mindless party blindness.  We cover this human phenomenon in our article entitled “The Little Black Box Theory.”

One party (Republicans) believes in the founding principles of America and individual freedom and tries to be true to those principles, albeit haltingly.  Unfortunately, the other party (Democrats) is doing everything in its power to tear down those principles of freedom and gain perpetual political power.  It is that simple.  The parties are all about power, never about principle.  (See: “Without Adherence To Principle, There Is Chaos”)

It would be great if the two parties were equally matched, but they aren’t.  The Democrat Party has been very successful in brainwashing at least three or four generations of Americans using the public school system, academia, the news media, hype, lies and propaganda.  Why else would millions of millennials subscribe to Bernie Sanders socialism?

Democrats have also been successful in capturing the hearts and minds of the journalistic class and now most of the news media acts in sympathy with and advocates for the Democrat Party.   That is to be expected when most of the journalistic class are products of liberal colleges.  This also applies to all government employees where government bureaucracies have become an illegal fourth branch of liberal government with tremendous power to shape public policy and derail any other policy with which they don’t agree.  This unconstitutional fourth branch of government is answerable to no one, least of all the voters.

A journalism student called Rush Limbaugh on Rush’s radio program one day.  Rush asked him why he wanted to be a journalist and the student blurted out that he “wanted to change the world.”  It obviously never occurred to the student that journalism was supposed to be an objective view of reality and to report that reality accurately.  Where did the student get that idea?  From the liberal college he was attending ….. or his parents.

So why do Democrats vote Democrat given what may be the irreparable damage that Democrats have wrought upon America and the current epidemic of violence, looting and burning that has taken over many of our cities under the false flag of Black Lives Matter?

Fiscally, Democrats have ballooned the national debt and the debt of many states and cities run by Democrats such that the debt is now un-payable, all caused by runaway local, state and federal government spending.  In 1974 the U.S. budget was $216.5 Billion.  In 2019, just 45 years later, the budget had risen by 1733% to $3.752,609 Trillion.  That’s not gross negligence; it’s criminal.  Why would Democrats vote for this kind of governance?

In the Democrats’ attempts to gain political power, they have made promises to constituency groups for votes that far exceed the taxing resources of the area population, leading them into massive deficits and an exponentially exploding national debt.

In May of 2019 Forbes Magazine warned of a $5.2 Trillion Government Pension debt that threatens to overwhelm state budgets, a debt built up by Democrats to buy votes.  $5.2 Trillion is 25% of America’s Gross Domestic Product.  Now they want to be bailed out by the American taxpayer for their fiscal irresponsibility and the U.S. House of Representatives under speaker Nancy Pelosi (a Democrat) wants to give it to them, on the backs of the taxpayer.  Fortunately for the taxpayer, the Senate has stopped Pelosi in her tracks.

Democrats have been trying for over 100 years to create a monolithic society where only their vision of a socialist utopia is allowed.  Their vision is the complete dismantling of the U.S. Constitution, to be replaced by a Karl Marx socialist government.  Their vision is the antithesis of and in direct conflict with a free society, individual freedom, capitalism and free markets.

Under the Progressive ideology, their alleged goals were morality, economic reform, efficiency and social welfare.   It didn’t take long before these goals morphed into socialism as they attracted more and more of the population to their ideology by buying votes from naïve Americans, using the public’s money.  In the last several decades Democrats have become more strident and militant to achieve those goals, including riots, looting and arson, or the threats thereof.

When will normal, reasonable and prudent Democrats see through this false ideology and voting Democrats into power who want to defund the police and allow rioters to go free?

When will normal, reasonable and prudent Democrats get tired of open borders, sanctuary cities and a litany of violent crimes, drug trafficking and human smuggling committed by illegal aliens on the legal population?  Why aren’t Democrats angry over the lost jobs and the heavy financial burden that illegal aliens put on legal Americans for education, medical and social services and housing?

Black Democrats are calling all white people racist and guilty of white privilege. You white Democrats, how does that make you feel?  Why would you support a party that calls you a racist?  Black Democrats (most blacks are Democrats, but that may be changing in 2020) want reparations (money and lots of it) for slavery, and yet no American living today is guilty of enslaving blacks.  No Blacks living today are slaves.  In fact, Blacks today are living much better than their African cousins in Africa.   There is no systemic racism in America as Democrats would have you believe.  Further, most white people are not racists.  If you are white, why on God’s green earth would you vote Democrat?  (See:  Yes, White Men Built America.  It’s A Fact”)

The Democrat Party would have you believe that man is destroying the earth and creating irreversible climate change through his CO2 emissions.  They make Republicans, Democrats and Independents feel guilty for their CO2 contributions and that they therefore must pay dearly for their transgressions.  But their so-called climate change science is a false assertion.  (See: “Climate”)  They say we must enact the very expensive Green New Deal, which is essentially the replacement of fossil fuel energy with wind and solar energy, a physical and financial impossibility.  They say we must go to electricity for our cars and trucks, and yet the energy to charge the batteries in an electric car comes from coal, natural gas, nuclear and hydropower facilities.   Without fossil fuel energy, electric cars and trucks are useless, not to mention that it takes fossil fuel energy to build an electric car, or a wind turbine, or a solar panel.

But the environmentalists won’t let us build any more coal, or nuclear-fired power plants, or hydroelectric dams.  Without massive taxpayer-funded subsidies wind and solar energy are not economically viable.  Are Democrat voters incapable of seeing the absurdity of these policies?  It would appear so.  Or could it be that four generations of Progressive brainwashing have made them this way?

Why would a Democrat voter vote for a party whose presidential nominee is corrupt to the core, a man who has enriched himself and his family while being just one heartbeat away from becoming the most powerful man in the world?  Every member of Joe Biden’s extended family has profited off of his open and notorious, pay-to-play corruption.  (See: “The Senate Ukraine-Biden Report”)

But worse than that, the Democrat Party is intent upon destroying the foundations of individual freedom for which millions of brave Americans laid down their lives to preserve.  Their weapon of choice is a mindless mob of brainwashed zombies using fear, guilt, intimidation and threats.  Their leader is a past-his-prime socialist who never had an original thought ever enter his mind.  At best he is a shill, an empty shell and a Trojan Horse.

One of our readers summed it up this way:

“I’ve followed Harris for over 2 years and she is a psycho and Biden is corrupt and nuts, completely.  If these dirt bags get elected and capture the Senate, Americans will get what they deserve.  Biden doesn’t have enough brains to plug in an electric toothbrush, and Harris is a flip-flopping, back-stabbing, power-grubbing fruit cake!  Trump is no panacea, but he beats the opposition hands down!”

The schism and racial divide that Democrats have inflicted on America in the name of obtaining absolute power and a monolithic society could easily pit the flawed ideology of Progressivism/socialism against the unstoppable powers of freedom in a bloody civil war.  In such an event, Democrats alone would be responsible for the carnage, misery, pain and death suffered by the general population and open America up to the military ambitions of one or both of the two other super-powers.

So with all this irrefutable evidence in mind, “When Will Democrats Finally Get Tired of Voting Democrat” and reject its evil freedom-killing intent.

When Will Democrats Finally Get Tired Of Voting Democrat? added on Saturday, September 26, 2020