WHERE IS THE “ANIMOSITY?”

(Sep. 4, 2020) — Contradicting several media reports which emerged early Friday, President Trump tweeted later that afternoon that the military newspaper “Stars AND Stripes” will not lose its funding “under my watch.”

“Trump wants to pull funding from Stars and Stripes, a newspaper for American troops that began in the Civil War and has been serving our soldiers,” reads a USA Today subtitle in an opinion column published early Friday morning.

“Suspicious timing” reads a subtitle at The Daily Beast, although with an acknowledgement of Trump’s tweet negating earlier reportage.

The original announcement, sourced to a Pentagon memo ordering the newspaper’s defunding effective September 30, prompted objections from journalists, members of Congress, and the public. 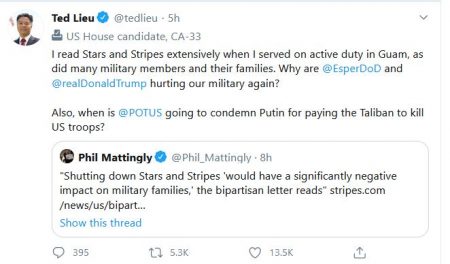 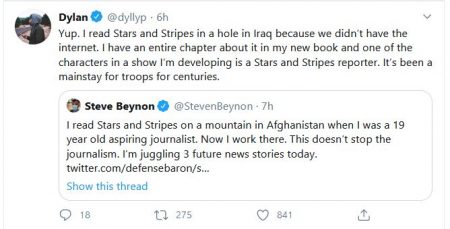 According to the Associated Press:

The Pentagon has ordered the military’s independent newspaper, Stars and Stripes, to cease publication at the end of the month, despite congressional efforts to continue funding the century-old publication.

The order to halt publication by Sept. 30, and dissolve the organization by the end of January, follows the Pentagon’s move earlier this year to cut the $15.5 million in funding for the paper from the Defense Department budget. And it is a reflection of the Trump administration’s broader animosity for the media and members of the press.

After Trump contradicted earlier reporting and Twitter trends were updated accordingly, there appeared to be little reaction on the social-media platform. 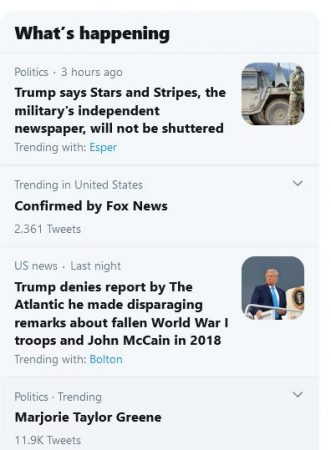 The mainstream media, however, widely reported the development, including the AP.  Referencing Trump’s pledge to retain the paper’s funding, the AP wrote, “Trump’s tweet came as he fought off new accusations that he called service members killed in World War I ‘losers’ and ‘suckers’ during an event in France in 2018. The comments, first reported by The Atlantic and confirmed by The Associated Press, are shining a fresh light on Trump’s previous public disparaging of American troops and military families and they delivered a new campaign issue to his Democratic rival Joe Biden, less than two months from Election Day…The Trump White House hadn’t spoken out against the Pentagon plan to close the paper before Friday, even though it’s been in the works and publicly written about for months and was in the president’s budget request. Friday afternoon, however, Trump worked to shore up his reputation as a staunch supporter of the nation’s armed services.”

In February Stars AND Stripes reported that its funding, half of which comes from the Defense Department, was eliminated in the 2021 budget.  The paper quoted several members of Congress who are also military veterans as supporting the continuation of the publication, which began reporting during the Civil War.  The article did not reference the president.