“GOVERNMENT IS IN REBELLION AGAINST THE PEOPLE” 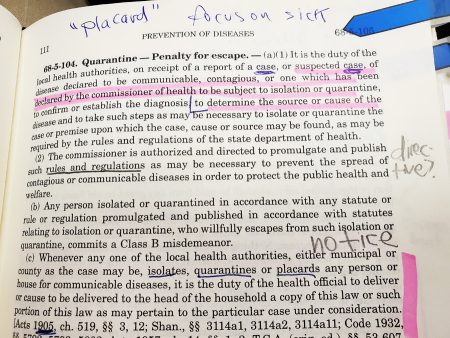 (Aug. 31, 2020) — I am studying Tenessee code annotated and preparing an action for petition for writ of mandamus to compel Gov. Bill Lee to obey the health law, which he has ignored so he might use, instead, the free-wheeling and open-ended “emergency” law that lets him ignore and abrogate our due process rights, those primarily notice and hearing. Quarantine powers are to be directed ONLY upon the sick. (Photo David Tulis)

I have sent a demand letter to Hamilton Count health department, with its public information officer Tom Bodkin and its health director, Dr. Paul Hendricks, and they are to receive it today at their offices next to Erlanger in downtown Chattanooga.

The letter asks the crucial dumb questions that will show just how far the state of Tennessee has gone away from its duties under law and against the people and their rights, as recorded in the state constitution.

I have studied the CV-19 operation of violence and oppression against us and seen the many ways in which it is unconstitutional. But the myriad ways it violates our rights and abrogates the constitution fade in importance when one identifies the key component for overturning this abuse — whether in my home state of Tennessee, or any of the other 49.

Across the map, the grave fault of state governments has been the same. And that is the first step into violation and lawlessness.

What is that first step?

What is the first mistake Gov. Bill Lee made, upon which all the others stand?

They are that he has violated the health code in Tenn. Code Ann. § Title 68, and failed to meet its duties. What are its duties? How has government failed to meet them? Can someone like me force the corporate state of Tennessee into obedience?

The answer is, yes. By proper analysis of the first misstep. The first one.

In a nutshell, it is that the state has failed to identify scientifically and medically the disease commonly described as Covid-19, nor its agency of transmission. The law requires these be identified in each locale — in each county — where the disease makes its appearance.

I believe this work of discovery has been ignored, and this duty criminally ignored, to the ruin of tens of thousands of business, jobs, companies and irreparable damage to millions of people in my home state.

Here’s the main bit of law I wish to ask the county health department about. From it we learn precisely its duties — which contain protection of our rights, our free market economy, our liberties, our prosperity if obeyed.

(a)(1) It is the duty of the local health authorities, on receipt of a report of a case, or suspected case, of disease declared to be communicable, contagious, or one which has been declared by the commissioner of health to be subject to isolation or quarantine, to confirm or establish the diagnosis, to determine the source or cause of the disease and to take such steps as may be necessary to isolate or quarantine the case or premise upon which the case, cause or source may be found, as may be required by the rules and regulations of the state department of health.

(2) The commissioner is authorized and directed to promulgate and publish such rules and regulations as may be necessary to prevent the spread of contagious or communicable diseases in order to protect the public health and welfare.

(c) Whenever any one of the local health authorities, either municipal or county as the case may be, isolates, quarantines or placards any person or house for communicable diseases, it is the duty of the health official to deliver or cause to be delivered to the head of the household a copy of this law or such portion of this law as may pertain to the particular case under consideration.

I find no evidence Gov. Lee nor Dr. Hendricks worked to obey the legal duties outlined in this law.

I am crowd funding this reform project at GoFundMe. The project is Liberty for Tennessee. Click now. Donate for the planned legal filing State of Tennessee ex rel David Tulis, a petition for a powerful common law remedy. Already, more than F$800 have been raised — thank you — thank you.

In determining the fact of whether they have obeyed their duty, I am sending Dr. Hendricks a memo that makes clear this duty and allows him to show he has rejected his obligation. I expect no response. I believe that in seven days I will confirm my report thus far: That government is in rebellion against the people in its humiliation of them since April 2, and that the state is subject to judgment in the court, and liable to an order to make reform.

These are, more or less, the questions that go at the state’s first mistake. The questions are formed as statements that presume the state’s goodness and virtue in obeying the law. But then I demand proofs and documentation of its obedience.