Police were responding Sunday to a report of a “domestic dispute,” CBS reported Tuesday.  According to the same article, which contains content from the Associated Press, “Online court records indicate Kenosha County prosecutors charged Blake on July 6 with sexual assault, trespassing and disorderly conduct in connection with domestic abuse. An arrest warrant was issued the following day. The records contain no further details and don’t list an attorney for Blake.”

Despite Evers’s 8:00 p.m. curfew order, violence erupted Sunday night which resulted in considerable destruction of property and two deaths late Tuesday night at a Kenosha gas station.  A 17-year-old Illinois man has been arrested in connection with the two fatalities.

A third individual was “critically injured” in the fatal incident, multiple reports said.

The violence is part of a summer of property destruction, looting, murder and maiming of innocent people and their businesses following the May 25 death of George Floyd while he was in the custody of the Minneapolis Police Department.  Cellphone video released from the scene appeared to indicate that an officer’s knee resting on Floyd’s neck for nearly nine minutes as he gasped, “I can’t breathe” was the cause of death.

There are conflicting reports, however, as to the reason for Floyd’s death.

On Monday night, according to ABC News, “protesters could be seen breaking the windows of patrol cars and lighting fireworks. Some were seen looting, throwing water bottles at officers and setting fires to vacant buildings nearby. The Kenosha County Courthouse was spray-painted with graffiti and the building’s first floor was set ablaze.”

Earlier Tuesday, Evers declared a state of emergency and authorized the positioning of up to 250 National Guardsmen in Kenosha, according to a statement issued by Evers’s office, CNN reported.

In two tweets shortly after 1:00 p.m. EDT, Trump wrote, “We will NOT stand for looting, arson, violence, and lawlessness on American streets. My team just got off the phone with Governor Evers who agreed to accept federal assistance (Portland should do the same!)…..TODAY, I will be sending federal law enforcement and the National Guard to Kenosha, WI to restore LAW and ORDER!“

With a background in education, Evers was elected in 2018, narrowly defeating Republican Scott Walker, who had run for a third term.  In his Twitter feed Tuesday, Evers indicated that he believes there is a “cycle of systemic racism and injustice” in Wisconsin and the greater United States which must be corrected, while at the same time condemning the “path of damage and destruction” wrought by those participating in “protests.”

As this article went to press, Evers tweeted: 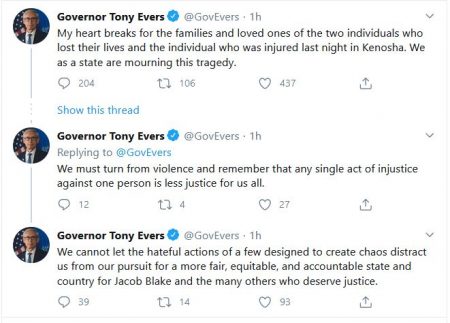 A fuller statement from Evers is here.