PETITION TO MEMBERS OF CONGRESS 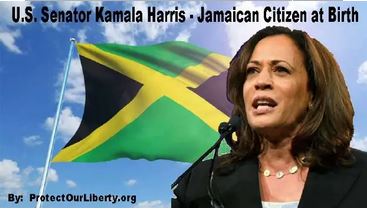 (Aug. 14, 2020) — U.S. Senator Kamala Harris was born a dual-Citizen and thus is NOT a “natural born Citizen” of United States with Unity of Citizenship and Sole Allegiance to USA. She was a Citizen of Jamaica at Birth.

U.S. Senator Kamala Harris is a dual-Citizen at birth who was born in California to a Jamaican Citizen father and a Citizen of India mother. She was thus born a Citizen of Jamaica via her father per the Constitution of Jamaica, Chapter 2, Section 3C and also gets special privileged Person of Indian Origins (PIO) status via her  mother. She also claims basic Citizen at Birth of the USA via the 14th Amendment of our U.S. Constitution and/or under U.S. Statutory Law Code Title 8 Section 1401, a naturalization law passed by Congress under its naturalization law constitutional powers. A “natural born Citizen” is a term of “Natural Law” and needs no congressional man-made “Positive Law” to make them a U.S. Citizen. Therefore as a claimed “Citizen at Birth” of the USA, (but some claim she is not even a U.S. Citizen at all since her parents were here on temporary VISAs and were not registered as permanent resident aliens of the USA when Kamala was born in 1964 in California, and neither of her parents were U.S. Citizens then), she would then be constitutionally eligible to serve in U.S. Senate, but since she is not a “natural born Citizen” at birth of the USA, she is not constitutionally eligible to serve as Vice President per the 12th  Amendment (last line), or as President and Commander-in-Chief, per Article II Section 1 Clause 5.

A PETITION FROM THE UNDERSIGNED

Recognizing that Kamala Harris is NOT a “natural born Citizen” of the United States and is NOT constitutionally eligible to be President or VP.

Whereas per the 12th Amendment of the U.S. Constitution (last line), the Vice President of the United States must meet the same eligibility requirements as the office of the President.

Whereas Kamala Harris was not alive at the time of the adoption of the U.S. Constitution and cannot avail herself of the “grandfather clause” therein available to only the Original Citizens and therefore has to meet the more restrictive “natural born Citizen” clause;

Whereas the founders and framers considered simply being a “Citizen” and then per  Alexander Hamilton’s suggestions being simply “born a Citizen” for the  presidential eligibility clause and the framers did not adopt those less restrictive terms for who could be the President and Commander in Chief once the founding generation had passed;

Whereas the term “natural born Citizen”, as that term appears in Article II, Section 1, Clause 5 is not specifically defined in the Constitution of the United States (since the Constitution does not include a glossary but was written in terms as noted in the Federalist Papers using language and terms that were clearly understood by them and the people of the USA who were called upon to adopt and ratify it), and thus we must look elsewhere outside the Constitution to what the  people of founding and framing era understood said term to mean (as is mentioned in the U.S. Supreme Court Case of (1875) Minor v Happersett), in order to determine its “originalist” meaning to those that chose that term and those that voted for and adopted and ratified our U.S. Constitution;

Whereas the Laws of Nature and Natural Law as evidenced by the Preamble of our Declaration of Independence strongly influenced our revolution and break away from England and the writing of our founding documents;

Whereas that per the “Principles of Natural Law” by Emer de Vattel (1758/1797) and  Natural Law and Laws of Nature familiar to the founders and framers, and the  people of the founding and framing era, understood that a “natural born Citizen” was a person born in the country to parents who were both Citizens (born or naturalized Citizens as long as they are both Citizens) of the country when their child was born in the country, and that term was chosen as a future national security clause as a “strong check” against “foreign influence” by or at birth on the person who would be eligible to be President and Commander in Chief of our  military forces once the founding generation had passed;

Whereas Kamala Harris was clearly and admittedly born to non-U.S. Citizen, foreign national parents when she was born in California in 1964, that said Kamala Harris was thus born with foreign allegiance to Jamaica via her Jamaican citizen father and thus has foreign influence upon herself via citizenship at birth in more than one country, and thus she was born with multiple allegiances and citizenship and divided allegiances and national loyalties at and by birth. This is exactly what the founders and framers did NOT want for the person who would be President and Commander in Chief of our military forces in the future after the founding generation, the Original Citizens, had passed away;

Whereas while Jamaica is a friendly country it is a foreign country and is not  part of the United States or its territorial jurisdictions; and