Kamala Harris Is Not Eligible

“THE CONFLICT WOULD BE MONUMENTAL” 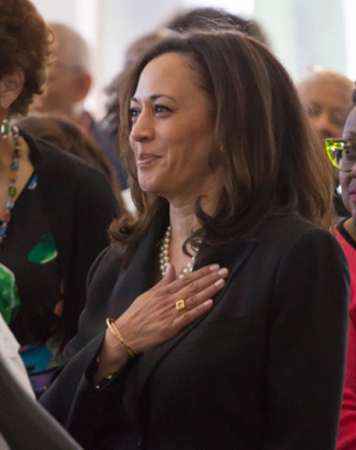 (Aug. 9, 2020) — REMEMBER:  Kamala Harris is not eligible to become President of the United States.  Neither of her parents were American citizens at the time of her birth. It’s like offering the children of any other foreigners as candidates. It is forbidden, banned, not allowed by the U.S. Constitution, which spells out the requirements.

A candidate, a valid candidate, must be a “natural born Citizen” per article Art. II, Sec. 1, cl. 5 of the U.S. Constitution: “No person, except a natural born Citizen,” shall be eligible to the Office of President. This is not about any past mistakes, or modern arguments — of which there are many. It is about The U.S. Constitution and the rule of law. Kamala Harris is ineligible.

What Congress relied upon in drafting that section —

“Permit me to hint, whether it would not be wise & seasonable to provide a strong check to the admission of Foreigners into the administration of our national Government; and to declare expresly that the Command in chief of the American army shall not be given to, nor devolve on, any but a natural born Citizen.”

Modern media pundits and others are attempting to confuse the issue, but the reality and logic is plain and inescapable: only a 100% American can be President. How foreign is too foreign? Any. (Her mother was from India, her father was Jamaican, neither had been in the U.S. long enough (five years) to have become naturalized at the time of her birth.) Sorry, those are the facts. She may be nice, talented, experienced, she isn’t qualified.

What would happen if our country got into a disagreement with a nation that was the homeland of a President with foreign roots, parents from elsewhere? Where would the person’s loyalty reside? Who would that person side with? Would the person have undivided loyalty to this country? Of course not — the conflict would be monumental. India has nuclear weapons. Jamaica is close to our shores. Both have alliances with other nations, some less than friendly with us, and complex financial relationships, supply chains, citizens here. The Founding Fathers recognized the problem those foreign entanglements would cause. That split loyalty is why our Constitution requires the U.S. President must be 100% American.

Details, if you want more:

Coming as soon as I can:

Joe Biden’s bill to require testing you personally, and then restrict or remove your access to your own guns, or any new ones, already written and introduced in the House and Senate, described in plain English. Here’s a quote, the first line:

“It shall be unlawful for any individual who is not licensed under this section to knowingly purchase, acquire, or possess a firearm or ammunition.”

Bureaucrats will be granted power to decide if you are of “sound mind and character” (not defined) before you can keep your own guns, or get new ones, and “any other requirements the State determines relevant” to “make a determination of suitability” to keep the guns you already own, or get new ones. I know, I know, it’s beyond outrageous. Mess media has kept it a secret, Republicans haven’t done much better, but at least they didn’t write the thing.

Thank you for your patience.

Alan Korwin, The Uninvited Ombudsman
Author of 14 books, 10 on gun law
Three more underway, including the blockbuster,
Why Science May Be Worng

While you’re waiting — Manhattan has been boarded up; mass media has been keeping this hidden; it is so far beyond “demonstrations” or peaceful there are no words for it. Look for yourself:

Kamala Harris Is Not Eligible added on Sunday, August 9, 2020

8 Responses to "Kamala Harris Is Not Eligible"