“THE ADMINISTRATION OF JUSTICE” 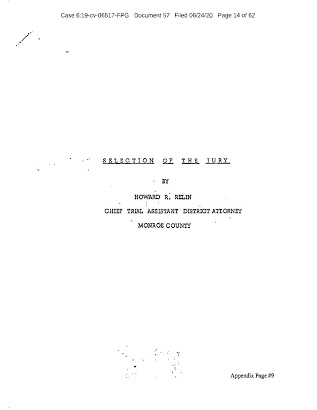 (Aug. 4, 2020) — I thought I ought to add my voice to the cacophony being raised about systemic racism by providing documentation of it from my days as a criminal prosecutor in Rochester, New York.

In the summer of 1987, a chance comment after church by the mother of my first girlfriend, Sarah Zartman, changed my life. Mrs. Zartman at the time was the chairwoman of the Republican Party for Rochester and had a problem. There was no one who wanted to run in the fall 1987 election against the Democratic incumbent District Attorney Howard Relin – my soon-to-be ex-boss as I was leaving the office after five years working there as an Assistant District Attorney.

Though I knew there was little chance of success, Ms. Zartman thought the election would be an excellent opportunity to introduce me to the electorate as a nice guy, homegrown candidate and would pave the way for the following year’s election to the State Senate, where a seat was to be vacated and up for grabs. The last thing anyone wanted was for me to leave a bad taste in the voters’ mouths as first impressions are everlasting.
However, that was not to be. My former boss and opponent in the race for District Attorney was Howard Relin. Mr. Relin had authored a “Selection of the Jury” memorandum for his 40 Assistant District Attorneys directing them to remove “women and minorities” from the jury whenever the defendant was of African descent. This appalling 1981-1986 policy of Mr. Relin’s office was not only morally repugnant, it had been unconstitutional since 1965 when the Supreme Court held in Swain v. Alabama, that: a “State’s purposeful or deliberate denial to Negroes on account of race of participation as jurors in the administration of justice violates the Equal Protection Clause.”
After I publicly raised this issue in the campaign and released the Jury Selection Memo as proof, no present or former Assistant District Attorneys would corroborate the existence of Relin’s Jury Selection Memo. I was socially and professionally blackballed (not for the last time) for using unfair campaign tactics. I lost the election by the largest margin in the history of Rochester, New York, elections.
However, three days after the election, the highest court in New York, in the case of People v. Knight, reversed a murder conviction obtained by Howard Relin’s office stating: “We find that defendant articulated facts sufficient to support the conclusion that the [Assistant District Attorney] exercised his peremptory challenges in a racially discriminatory manner, thereby shifting the burden to the prosecutor to provide neutral explanations for his peremptory challenges.” Subsequently, Relin’s Jury selection memo was introduced and its authenticity confirmed resulting in a new trial for Mr. Knight.
I was, as usual, vindicated ex post facto which is fine with me. 1 Corinthians 4:3.

One Response to "Institutional Racism & Me"